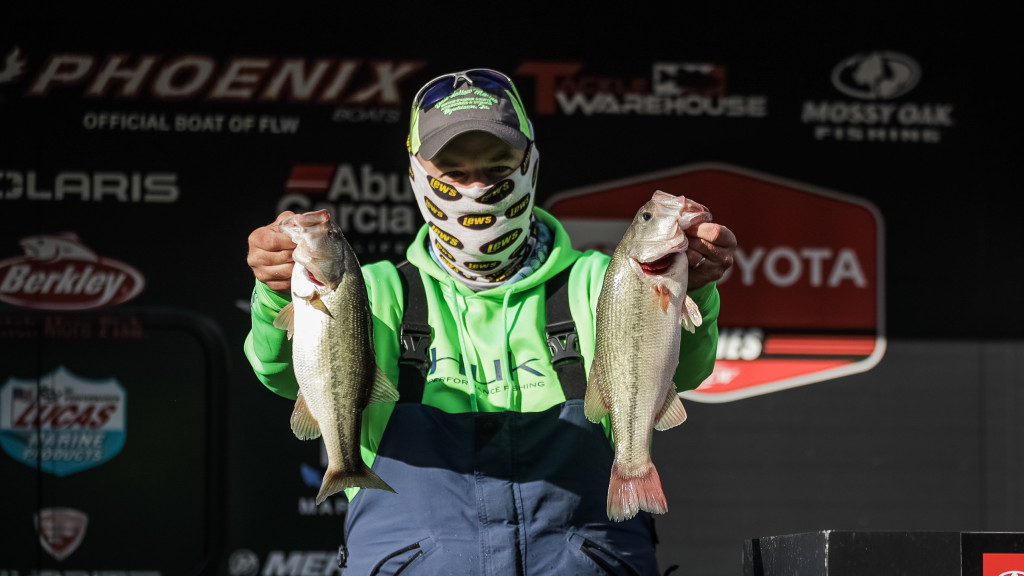 “Everybody has a plan until they get punched in the mouth.”

Former heavyweight boxing champ Mike Tyson was speaking literally when he uttered that famous expression. It applies to Dale Hollow this week, too – just in a more figurative sense.

Enter Blake Smith, who seems to be the only angler in the field of the Toyota Series Central Division finale who hasn’t been popped in the jaw a couple times this week. His plan has worked to perfection, which speaks as much to his planning as it does his execution. Thanks to his local knowledge and ability to put his plan into practice, the haymakers simply haven’t landed. But he’s been landing plenty of his own.

Smith is one of only three anglers to make the top 10 cut who weighed in a five-fish limit on both days one and two. Both limits were more than 11 1/2 pounds, which gives Smith a 23-6 total and a lead of 3 pounds, 2 ounces over Chris Malone in second place (Malone has also weighed in two limits).

To do it, Smith has really needed just one big school of fish, from which he landed a limit in the first 15 minutes Friday. He culled and caught some fish that didn’t help – basically cast after cast – before picking up his trolling motor an hour into the day and never returning to that school. Meanwhile, several boats in the area watched Smith have a dream start to the day. It’s safe to assume Smith wasn’t the only angler to poke around that area throughout the course of day two.

But assuming that school is still intact and where he wants it to be tomorrow, Smith is confident he’s going to have a lights-out final day.

“I’m not worried about saving fish anymore,” Smith says of his preserving the school for another day. “I’m going to sit there until every fish has had a hook in its mouth, and then I’m going start running fresh schools that I’ve not touched.

“If everything goes right, I could potentially have a bigger bag than I’ve had any day. Anything can change. I had a lot of guys watching me. Every one of them boats could have fished it to death when I left.”

Even if that is the case, though, Smith has located three more schools from which he thinks he can catch some quality fish.

“I’ve got three schools I’ve not touched,” he adds. “I didn’t go back and look at two of them, but one school is still there.” 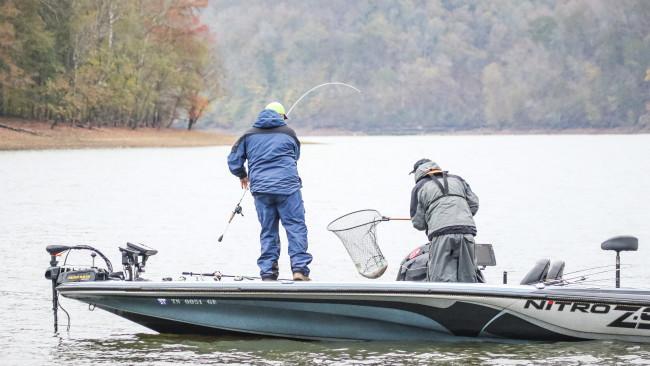 Finding schools is one thing – his local knowledge, being from Byrdstown, Ky., certainly helped in that area – but catching those fish is another. And having the fortitude to leave them biting, knowing they could aid in a victory tomorrow – that’s something else entirely.

“Honestly, I just feel as tough as the bite is right now, if I could just do what I did [Thursday] that I could put myself close enough that I wouldn’t have to try to extend the lead that much,” he says of leaving his best school so early in the day. “Tomorrow, if everything goes right and nobody gets on [the school] again, there’s a chance of a big, big bag.”

It seems simple: Find a big school,  catch a bunch of fish. Usually, it isn’t that easy, but right now, Smith really does make it out to be just that. His fish are resident fish grouping up ahead of the fall transition and they’re right where you’d expect them to be, around channel swings and ditches with isolated cover.

To catch his fish, Smith has mostly been cranking, though he’s mixed in a dragging bait when the school “slacks off” and needs something to get it fired back up.

Thursday was rainy but warm. Friday brought a cold front that dropped afternoon highs into the upper-40s, though it also brought some sunshine. Saturday’s forecast calls for a high of 64 with plenty of sun, which is exactly what Smith wants.

“I’m not worried about the weather; this sunshine is doing nothing but helping me and making it better,” he says. “Everything should stay the same. I feel really good going into tomorrow.”

As he should. And even if things don’t play out as he expects them to, Smith is going to go down swinging. 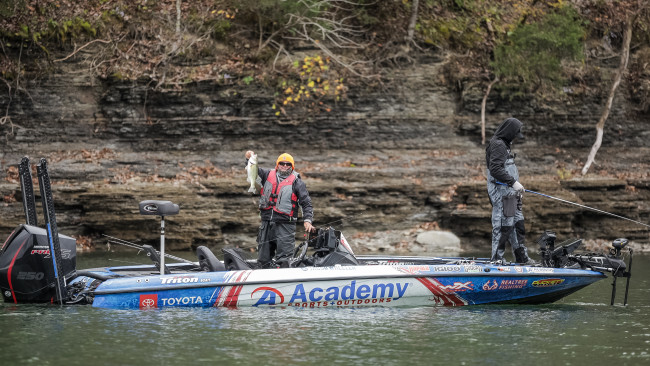 Robert Russell has only been to Dale Hollow twice, both times as a boater in Phoenix Bass Fishing League competition. This week, from the back of the boat, he’s fishing Dale Hollow as though he’s fished it a hundred times.

One of only two co-anglers to weigh in four fish yesterday (none weighed in a limit), Russell was short on numbers today but stronger in the quality department. His two keepers went 5-10 for the third-largest co-angler bag of day two.

The key for Russell has been fishing as clean as possible.

“It’s been tough this week for bites,” he says. “I got four bites the first day and caught four fish. I had three bites today and caught two fish.”

And, of course, adapting to both the conditions and what his boaters have been doing has been equally as crucial. On day one, in the back of Adam Militana’s boat, Russell caught all of his fish up shallow on a jig, save for one keeper on a steep bank that he plucked out of 30 feet of water. Today, Russell fished behind the No. 1 bass angler in the world, Jacob Wheeler, fishing entirely differently.

“It was completely different than the first day,” he says. “We stayed out in open water and fan-casted, and I got lucky.”

Lucky in that he caught what he did and also lucky in his draw, which Russell was quick to point out as well. He says Wheeler was a great boater who not only gave him opportunities but also some instruction in terms of bait selection and approach.

“That’s why we bring more than one rod,” Russell jokes. “As long as we’re on fish and catching fish, I’m happy.”