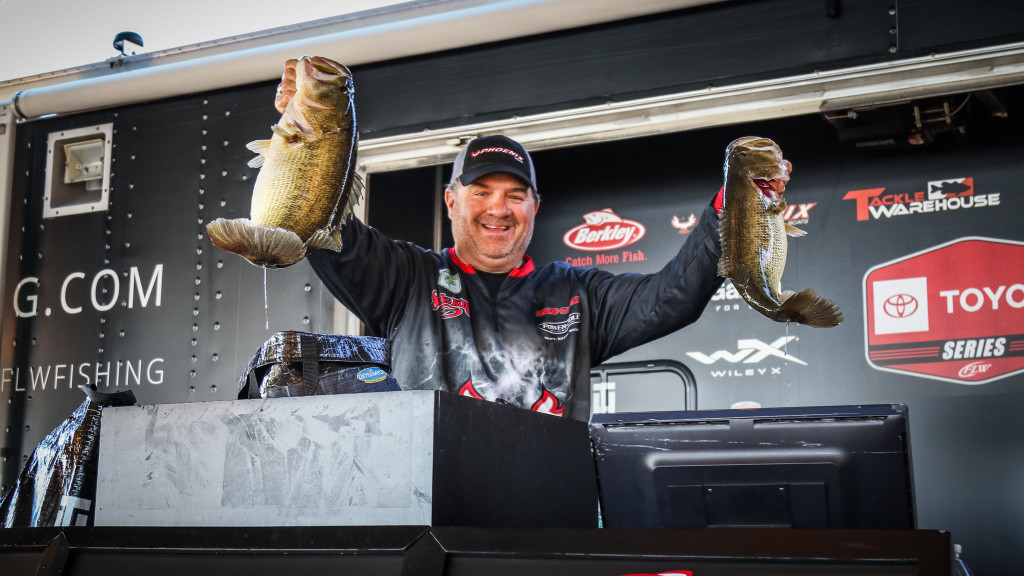 This year, things lined up for Curtis to fish a full season of Toyota Series competition for just the fourth time since 2011 (when he finished fifth in the points). With a pair of top fives and a 16th place showing at the finale on Sam Rayburn, Curtis cruised to the Strike King Angler of the Year title.

For Curtis, winning AOY ranks as a huge accomplishment.

“In my years of doing it, I’ve always found more motivation when I’m competing to win the points or angler of the year,” says Curtis. “It’s special for whoever has the opportunity to do it, and I feel grateful that I had the opportunity to do it. Anybody that wins an angler of the year title at their level, it’s a great accomplishment. To me, it’s even bigger than winning a tournament.”

Of course, it wasn’t originally in the plans at all.

“The truth of the matter is, I wasn’t really planning on fishing the whole season,” says Curtis. “My team partner, Mark Mueck, and I were going to fish a team trail, and his son is into high school fishing, so he doesn’t get a lot of time. I didn’t have anything going on for the first tournament, I intended to fish that one, and I really didn’t plan on fishing the whole thing. This was going to be the first year of a big money team trail in Texas. They were going to do like four tournaments, with an entry fee of around $1,500, so it was going to be comparable to what we fish individually, but in a team format. Quite honestly, I’ve been trying the last several years to encourage somebody to do it, and we were finally going to do it.”

When the world stopped for the COVID-19 pandemic, the subsequent rescheduling basically made it impossible for a new tournament trail to get off the ground in the fall of 2020. So, Curtis suddenly had some open time.

“With that being off the table, I had the opportunity to go to the next one,” says Curtis. “Things worked out good there, and at that point, looking at the points, I knew I had to go to Sam Rayburn. I’ll be honest with you, it’s an honor, I’ve won tournaments, and I hope I get to win some more, but winning an angler of the year title, it’s special.” 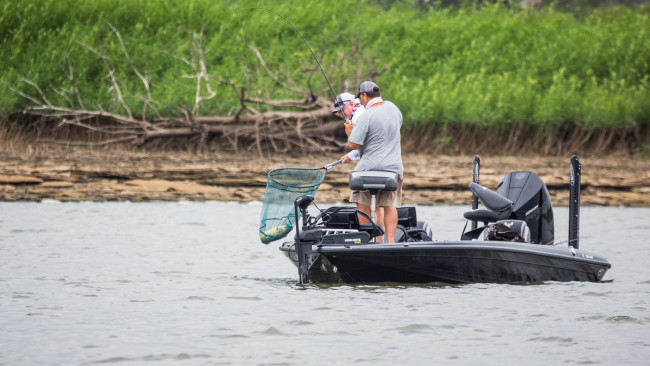 A return to the top level isn’t in the cards

Curtis isn’t on the radar nationally as a premier Texas talent these days, but it’s not because he’s a flash in the pan. Curtis simply hasn’t stuck to high-level fishing lately, instead fishing locally for the most part, and not trying to take the next step.

Back in the 90s, Curtis dabbled in the high-level events, mostly getting beat pretty soundly. In 1999, he got his big break, winning a Toyota Series event on Toledo Bend, triumphing over the likes of Todd Faircloth, Stephen Johnston and Edwin Evers. From there, he kept moving up the chain, fishing better and better as he did. Finally, after cleaning up regionally, Curtis took another shot at the Tackle Warehouse Pro Circuit (then the FLW Tour) in 2006.

“2004 and 2005 were special, I won some tournaments and had a few really good years,” says Curtis. “At the time, I had submitted a resume for the FLW team deals. It was one of those things, where they said if I came out and fished one year, they would take a look at it the following year. I actually had a pretty good year, and a few good tournaments, but I was one of the guys that came up short; I came in with six fish the last tournament at Champlain, and it knocked me out of the Cup.”

Finishing 87th in the points in 2006 with a pair of top 15 finishes certainly wasn’t bad, but it wasn’t enough for Curtis to keep doing it.

“I see some guys that say “from the time I was 10 years old, all I wanted to do was be a professional fisherman,’” says Curtis. “To be honest, I don’t cast myself as one of those type of guys. I grew up in the country, hunting and fishing my whole life, but as far as public waters, boats, tournaments and that kind of thing, my first exposure to that was when I was about 19 years old. I had a friend of mine take me fishing, and I was in awe of the fact that you could go down the bank and flip a worm 20 feet from the boat and catch a bass. My idea was to go in a pond, casting lures as far as you could, and reeling them back.

“With respect to the tournaments and fishing, once I fished the first tournament of my life, I was hooked; I had a passion to tournament fish,” says Curtis. “But, I can’t say I ever had a goal to do it professionally. I just enjoyed fishing, and I enjoyed the thrill of competition. One thing just led to another, after doing it a few years and beginning to have success at one level and then another level, it just evolved. In that ‘04, ‘05, area, what I did in those couple of years was as good as anyone could have done at the level I was fishing. Naturally, you think about taking it to the next level.”

Now, having qualified again for the Pro Circuit, Curtis isn’t itching to get back out there. He likes where he’s at, and he’s happier fishing for 10-pounders in Texas than driving thousands of miles to battle for 15 pounds and a check.

“The short answer is I probably won’t [fish the Pro Circuit],” says Curtis. “To be honest, the thing that would entice me is if the schedule went to Rayburn, or if I liked the schedule a little better, I would give it some serious consideration. The fact that they’re staying out east with everything, it’s not what I want.

“I’ve gotten to the point in my life, man, I really don’t wanna go fish on bad lakes,” says Curtis, who might be coming down just a little hard on the 2021 schedule. “There might be another way to say that, but I like lakes with big fish, where you can power fish and have success. I’ve had success in a couple of tournaments with finesse, but we have some of the greatest lakes in the country right here in Texas. You can travel thousands of miles and spend thousands of dollars and go to a lake that, in my view, is just tough.” 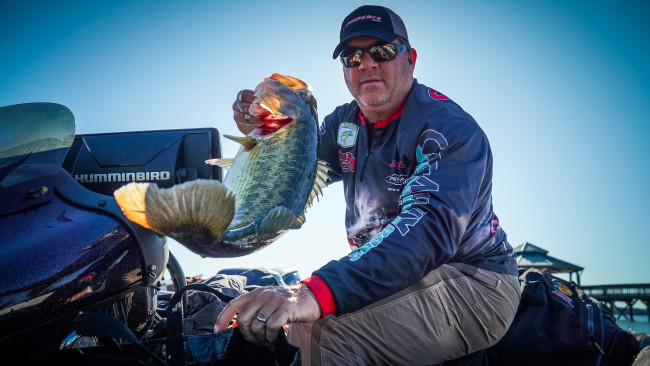 Cumberland is the next challenge

Now that he’s wrapped up a successful regular season, the next stop for Curtis is the Toyota Series Championship on Lake Cumberland at the beginning of December.

“I’ve never been there, it is the opposite kind of venue that I would pick, but I’m gonna approach it like any other,” says Curtis. “I’m gonna go up, and try to pre-fish it some, and hopefully get something figured out.

“I’ve had a couple good events on lakes that aren’t my style,” says Curtis, who has won the Toyota Series Championship before on Table Rock, which isn’t exactly his cup of tea. “I’ve heard from people that it’s got fish and is a pretty good lake. I definitely think that based on the time of year and guys I’ve talked to it’s definitely going to be a smallmouth deal. I’m gonna be there and be optimistic and try to get something figured out.” 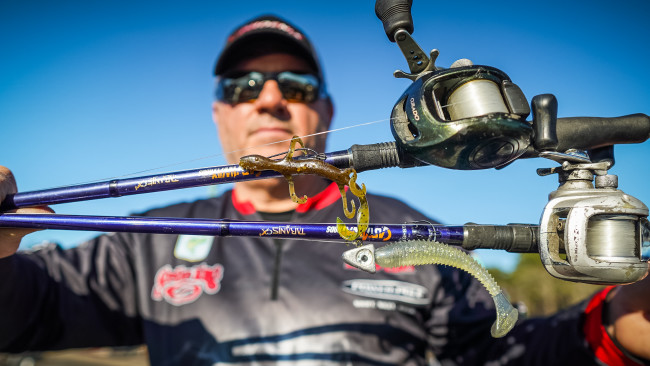 The 2020 Southwestern Division season hit Toledo Bend, Fort Gibson and Sam Rayburn. Things started in February on Toledo and picked back up in September in Oklahoma. Each event was dramatically different, with an offshore bite dominating at Toledo Bend, a shallow, grinder derby going down at Fort Gibson and a grass and offshore event finished things off back in Texas.

Curtis fished a combo of deep and shallow at Toledo Bend, but he didn’t need a whole slew of tackle to get it done.

“The majority of my fish came on a Carolina rig with a lizard,” Curtis says. “That’s just typical east Texas. I really had about a 100-yard stretch in a drain that I was working. There were some key stretches along that 100-yard stretch and I just rotated through them. Most of my fish were in 6 to 12 foot. It’s boringly simple.”

Along with a lizard, Curtis did catch two key fish the final day on a Strike King Rage Swimmer.

“In all honesty, with the water level low and the time of year I thought I would find a lot more deep fish,” he says. “The takeaway for me was that there were a lot of fish caught suspended and I wasn’t prepared for that. I did have one spot I made some key culls on day two from that was deep and without those I wouldn’t have made the top 10. Otherwise, the majority of my fish were shallower.”

At Fort Gibson, Curtis did a little of everything.

“I spent a week pre-fishing,” explains Curtis. “I was honestly just trying to get dialed-in to one or possibly to things to go with, and I struggled to do that. I caught fish here and there but would switch up and catch them doing another thing. All things considered, it was a blessing to be here. It’s been a grind, it’s been hard work. Lots of casts and not a whole lot of fish catching.”

At Rayburn, Curtis mostly stuck offshore, and didn’t really commit to the shallow grass bite that did so well for others.

“I caught a lot of them on a Carolina rig and a crankbait,” says Curtis. “But, I did fish shallow a little bit, too. I caught one that I weighed on a frog.”

On day two, Curtis lost a big one on a Carolina rig, which would have given him three top-10 finishes on the season.

“On the second day I lost an 8-pounder inches from the next, I mean, inches,” says Curtis. “We got a good look at him, it was a big one, it would have made a nice cull. I would have probably ended the day around fifth place and in the top 10. You hear all these stories about guys losing an 8-pounder. I’m not saying it never happens, but it doesn’t happen too often. But man, it happened that second day.”

Here’s a look at the top 10 pros in the Southwestern Division in 2020.