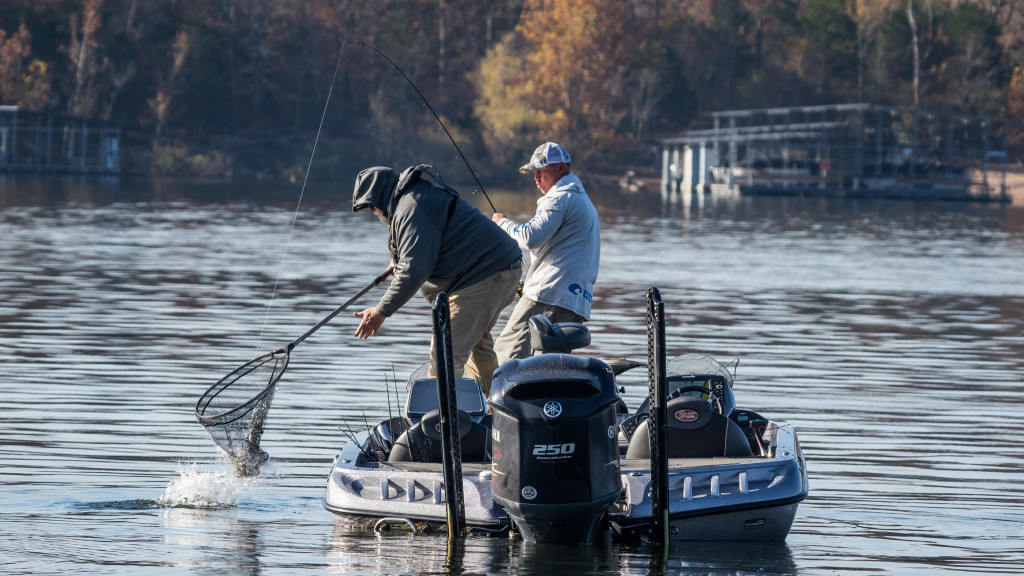 Most of the dock talk this morning hinted at the fact things weren’t going to be easy on Table Rock for the final Toyota Series Plains Division event of the season, and while that was mostly true, the anglers focusing their efforts off the bank have been producing both numbers and some quality.

As far as the weather is concerned, it is an absolutely perfect fall day on the water – for the anglers anyhow. Clear skies, light and variable wind and temperatures in the low 70s have it feeling more like spring than fall. The lack of wind has certainly hurt the guys trying to burn the bank with a topwater, however, for the pros fishing offshore it’s been decent.

The most notable pro seen on the bank was Ozark legend Stacey King who reported two fish worth around 5 pounds. However, our on-the-water crew didn’t venture too far up the rivers where that bite could be better.

Leading the charge thus far offshore is Cody Huff who reported a limit worth around 13 pounds. He still has plenty of time left to fish and could very easily cull up considering he caught some quality fish over 3 pounds in practice.

Mike McClelland was also spotted fishing off the bank and reported four keepers, but still is looking for better quality. Travis Fox noted the same, though has three spotted bass in the box with one being about 2 ½ pounds.

One of the most common gripes from the water this morning was that anglers are catching fish, just not many keepers that hit the 15-inch minimum size limit for smallmouths, spotted bass and largemouths on the lake.

The majority of pros we encountered reported only a keeper or two.

Here’s a rundown of other reports:

Andre Dickneite – One keeper at 9:00 this morning

With just a few hours left to fish there’s still plenty of time for guys to grind out a limit or upgrade. Considering how much water or crew couldn’t cover today there’s no doubt some decent bags have gone under the radar. Tune in at 3 p.m. CT to see who sets the bar on Table Rock.