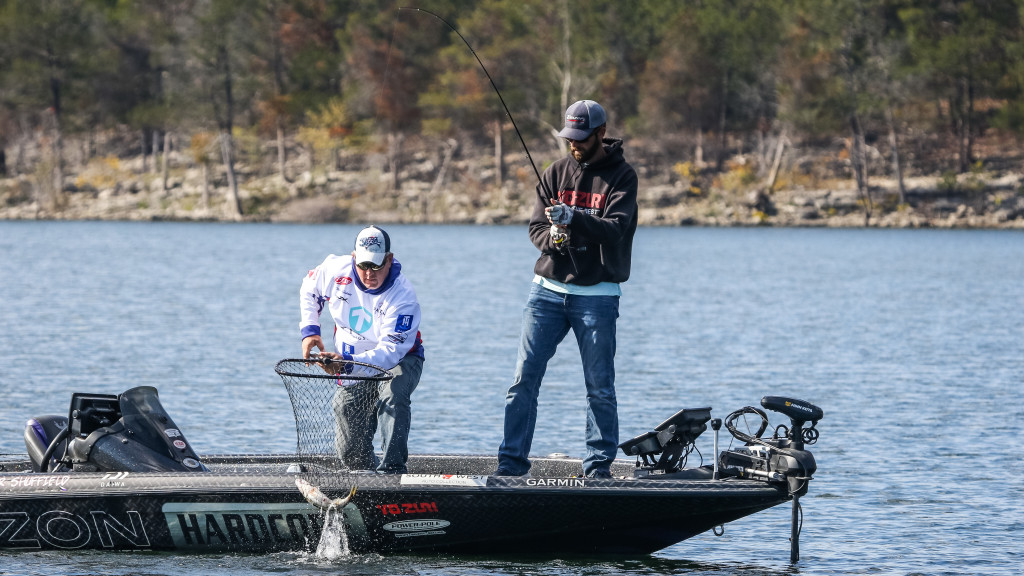 Day two of the Toyota Series Plains Division finale on Table Rock Lake has been essentially a carbon copy of day one, well, as far as weather goes. Bluebird skies, light wind and temperatures hovering in the mid 70s once again made for pleasant conditions on the water, though it hasn’t done anything to help the fishing.

Day-one leader Cody Huff picked up right where he left off yesterday putting a limit in the boat just before 8:30 a.m. this morning. Chasing suspended fish, Huff made several culls to move up to around 12 pounds before our photographer left him around 10 o’clock. With a slightly shorter day today, Huff still has plenty of time to find some key 3-pounders, or even a kicker like he had yesterday.

Spencer Shuffield started the day tied for second and is running a similar program to Huff chasing suspended fish around mid-lake. However, things aren’t going as smoothly for the Arkansas pro. He had three fish in the box by noon worth around 6 pounds. He says his fish are sitting much deeper and are harder to drop a bait on today and he doesn’t understand why. Shuffield still has a secondary pattern of running docks that he plans to check out this afternoon, so he hasn’t reached scramble mode just yet.

Other than that, the rest of the top pros have run to the far upper reaches of Table Rock and have been out of reach all morning. Like yesterday, the majority of anglers we checked on reported only a fish or two.

Austin Brown is one pro that was piecing together a decent limit and having no trouble catching fish. He’s targeting suspended fish with a jigging spoon and was catching keepers and non-keepers consistently. Though he only weighed one fish yesterday, he’s on pace to rally for a check. More notably, his co-angler Adam Caldwell was on fire, boxing a fish pushing 5 pounds and two others close to 3 pounds.

With time left to fish and more unknowns from the majority of the top 20, it’s going to be interesting to see how it all unfolds at weigh-in. Tune in at 3 p.m. CT to see who makes the top 10 cut to fish on Saturday and who can punch their ticket to the 2020 Toyota Series Championship.