Central Division AOY set for championship and beyond 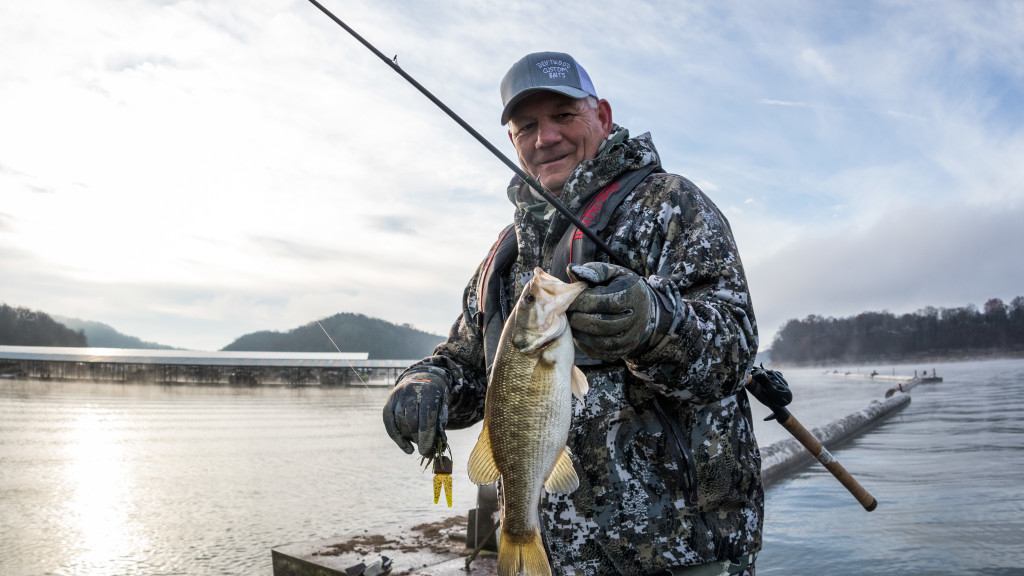 To get to Cumberland, and win AOY, Robinson racked up back-to-back top 10 finishes on the Tennessee River and closed the regular season out by finishing 18th on Dale Hollow just a month ago. Though he’d never been on Cumberland until just a few weeks ago, Robinson has been putting the work in as he readies for the biggest tournament of his life.

With that in mind, I took the chance to jump in his boat on the second day of practice to get to know the Greenback, Tenn., pro a bit more and see how things are looking for the championship. 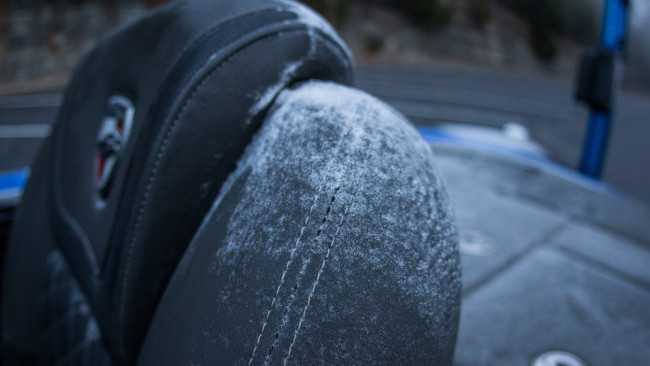 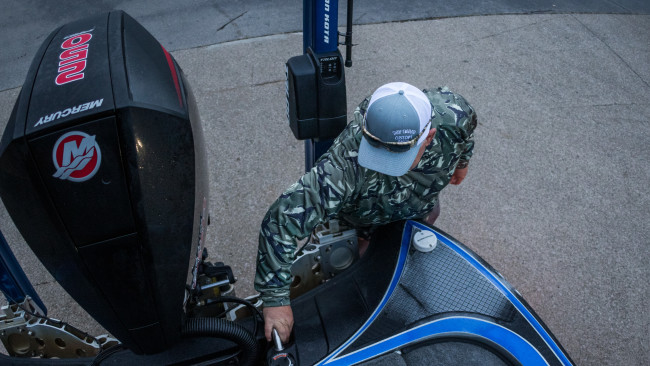 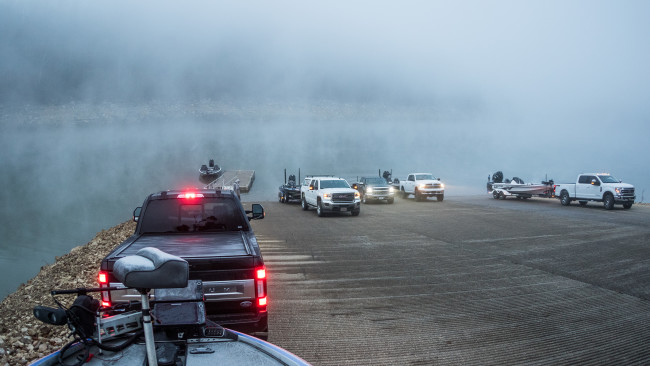 We meet at General Burnside State Park, which is where takeoff for the event will be, around 7:30 a.m. ET, but are in no rush as it’s a nippy 31 degrees with plenty of fog on the water. Robinson takes his time getting the boat ready and unthawing his compartments so that they’ll unlock before easing down the ramp to splash the boat. 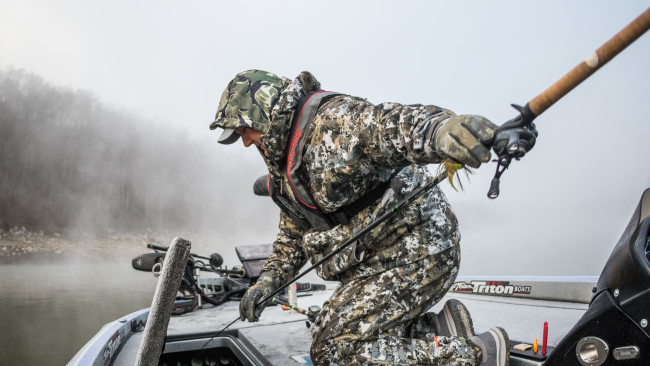 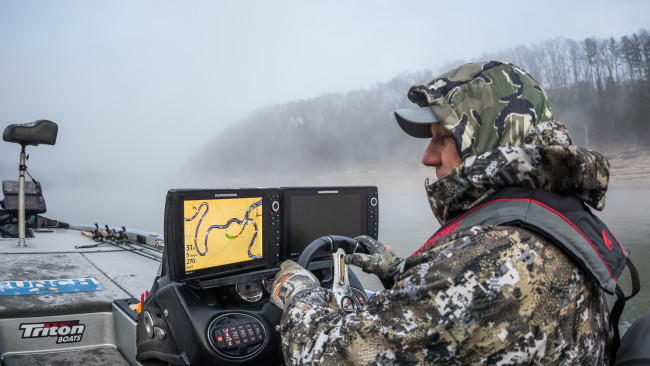 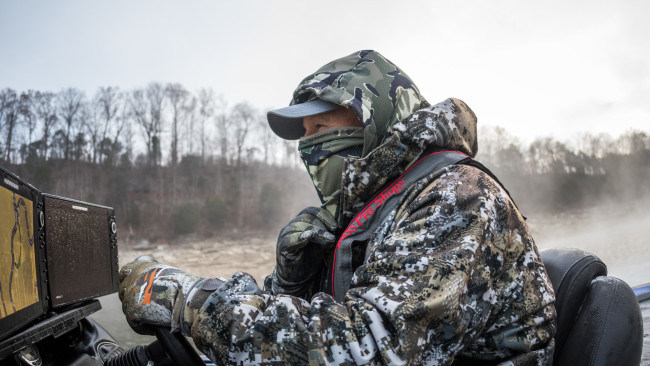 Robinson spent the first day of practice looking at the mid-section of the lake, but today wants to see what’s happening on the upper end, so he pulls a few rods from the locker and we begin to idle away from the ramp.

Since the fog is fairly thick, Robinson makes a short run down the lake to a stretch of bank he caught some fish off in pre-practice. It also happens to be on a stretch of river with less fog, which seems to have him happy as well. 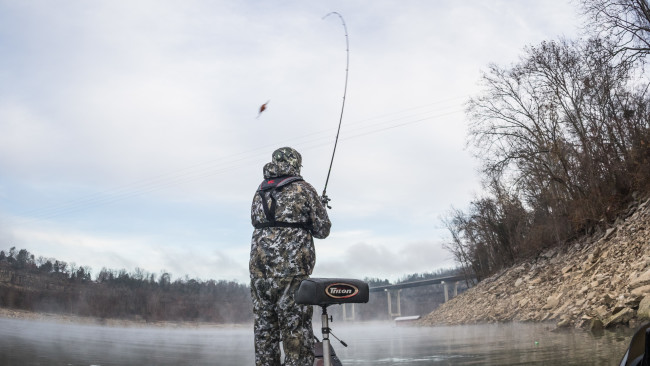 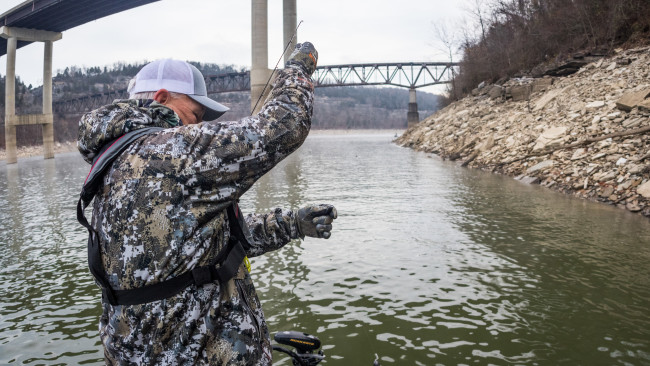 Robinson grabs a crankbait to start things off. While he’s cruising down the bank and occasionally getting his crankbait unhung, I ask him about his great season, which was his first time fishing the Toyota Series.

“I took the last 20 years of fishing off to spend time with my family and coach my three sons in baseball,” says Robinson. “Brent Butler was telling me I needed to fish [the Toyota Series] and with the way things worked out this year and the schedule in the Central Division I gave it a shot. It’s my first year for me to fish these and I stinking won AOY. It’s awesome.

“Technically, people call me a river rat because I love moving water and that’s why I did so well in the first two tournaments,” he says of his top-10 finishes on Chickamauga and Pickwick. “But it was just one of those years where things happened for a reason. I missed a big fish the first day at Dale Hollow and I went back to the same spot on day two and caught her. It was a 4-pounder, and I only weighed two fish that day, but that fish won me AOY.” 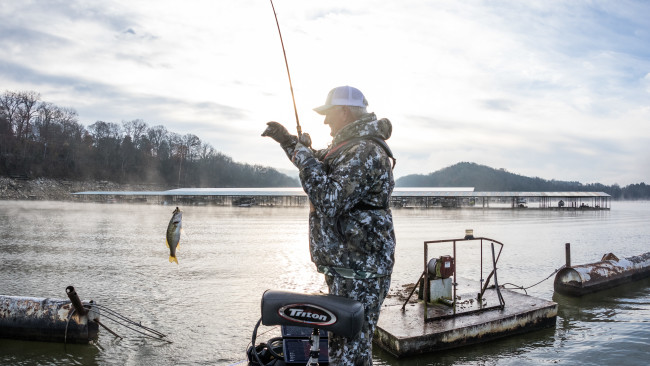 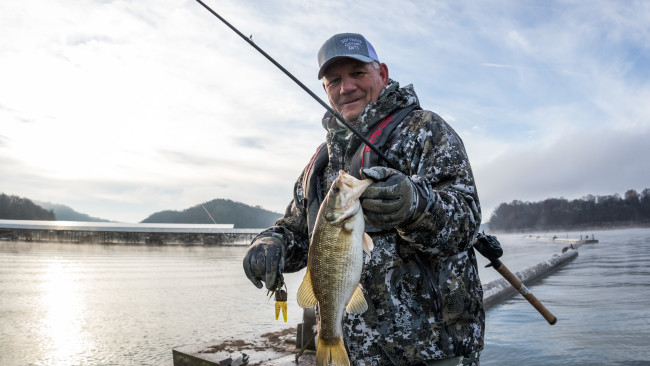 Moving back towards the main river, Robinson picks up a jig for a few casts and connects with his first fish of the day.

“You know, this MGC jig and a Driftwood swimbait were the main things I caught my fish on this year,” recalls Robinson. “Every tournament it seemed like they produced key fish for me and the jig was what caught that 4-pounder on Dale Hollow. So, maybe it’ll have some magic left for this week.” 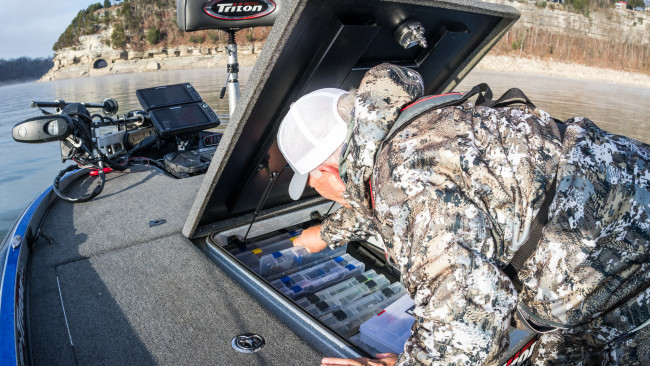 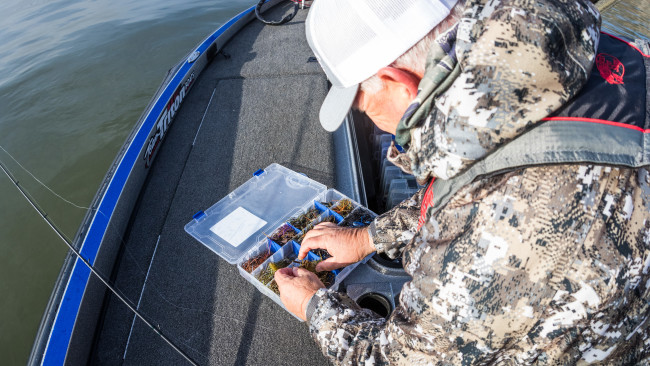 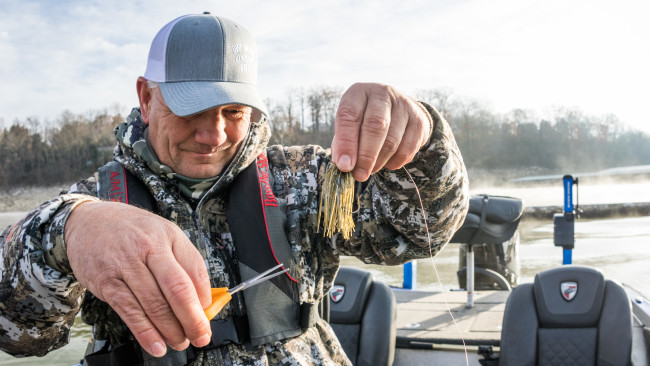 Before making a run down the river, Robinson takes a second to tie on a new jig. I figure it’s also a good time to ask him about accepting his bid to fish the Tackle Warehouse Pro Circuit in 2021.

“I always put family first, but since my boys are running my businesses and things lined up, I’m going to fish the Pro Circuit next year,” Robinson says. “My wife, Jenella, is fantastic and no doubt she’s my best sponsor. I’m going to semi-retire and Jenella is going to travel with me next year and we’re really excited about it.

“We’ll still run the Lake Lodge at Lake Chickamauga, but I won’t have to worry about my excavating business or deer hunting business. I won’t be stressing out over money, it will be really nice to be able to enjoy the season and focus on fishing.”

With a new jig trimmed and ready to go, we pack up and roll down the lake. 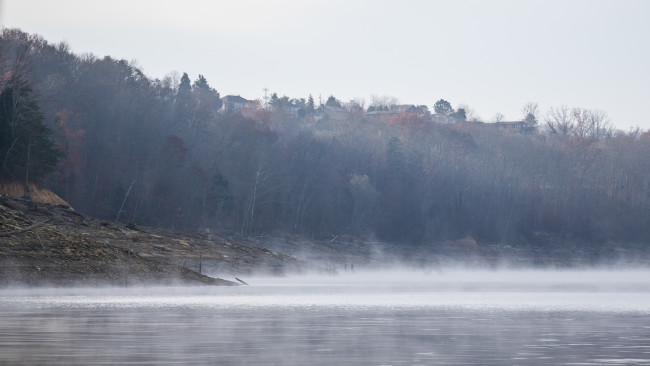 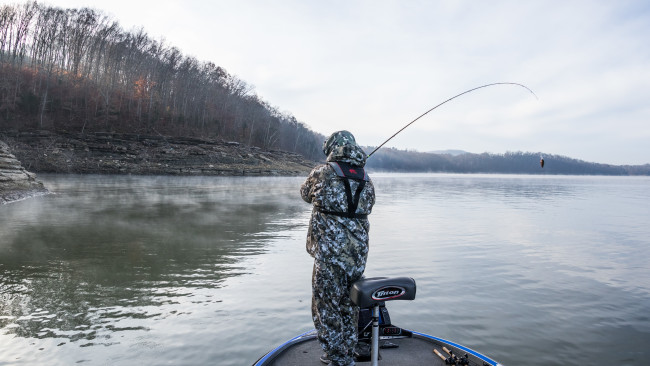 The fog is starting to lift now that the sun is popping out and it’s warming up at a decent rate. Though today is supposed to be the best weather day of the week, Robinson is hoping the change in weather will get the fish more active.

“I’m normally deer hunting this time of year, so I usually don’t fish much during this time, but I bet if we get some snow and colder weather to roll in those smallmouths are going to turn on,” he says. 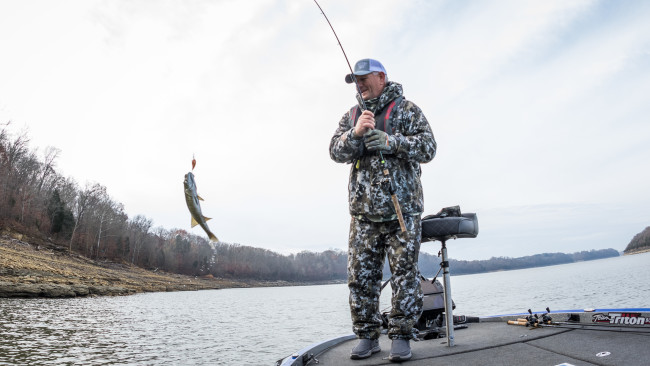 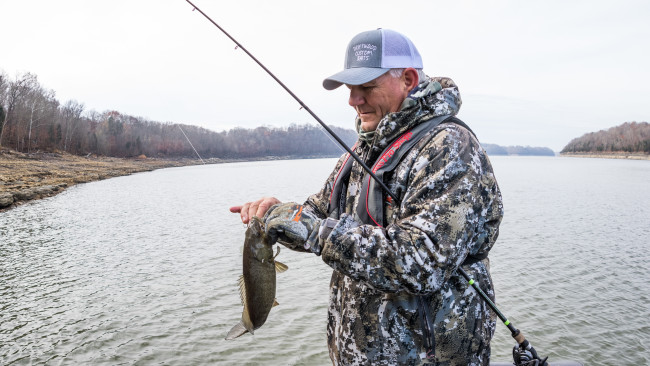 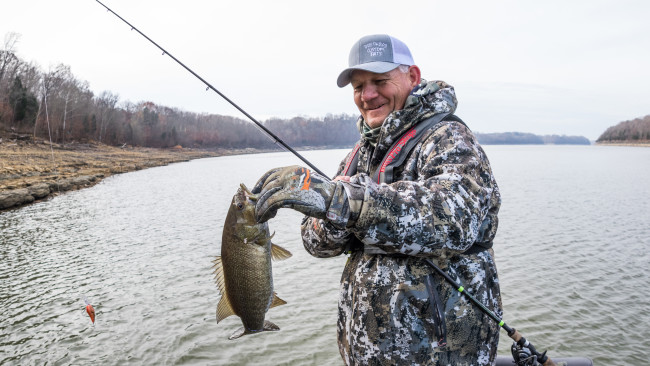 Almost on cue, Robinson hooks up with a skinny, keeper smallmouth. The length limit for smallmouth in the event has been reduced from 18 inches to 15 inches and Robinson certainly isn’t complaining about it.

“That fish sure seems like it could use a meal,” he laughs. “I was just getting ready to leave, too. Guess I should make a few more casts.” 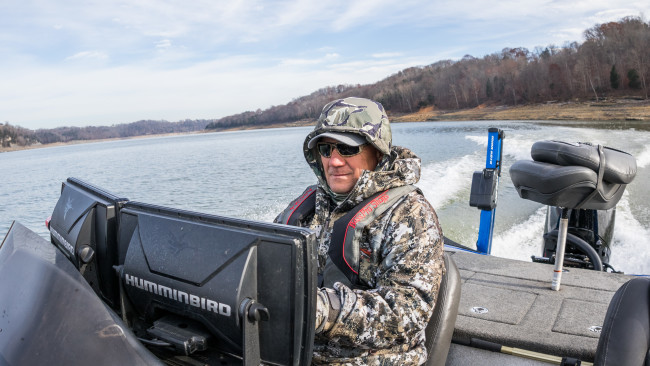 After a few more minutes of slinging a crankbait, we pack up and move a few miles down the lake. Having never fished a tournament on Cumberland before, Robinson spent several weekends pre-practicing for this event and has a few more waypoints he wants to check before dropping me back at the ramp. 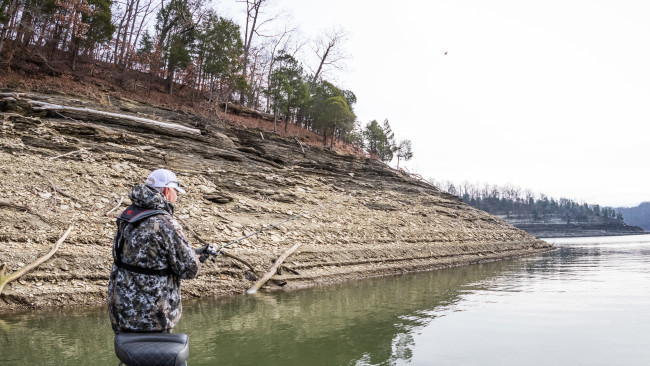 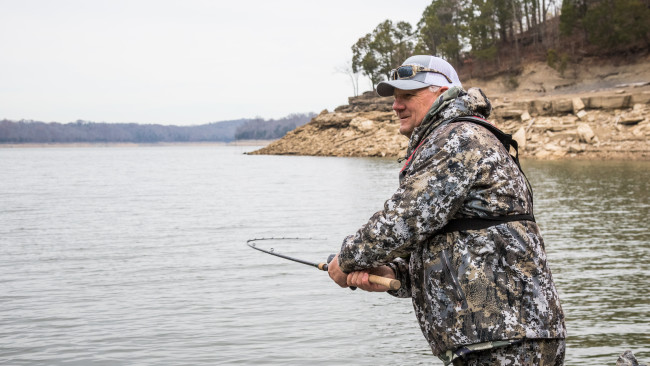 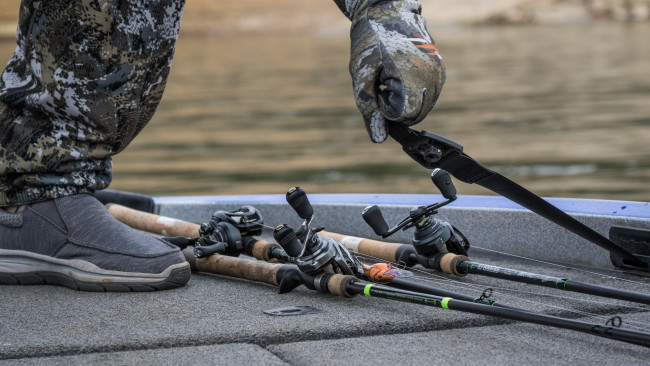 Robinson drops the trolling motor and keeps covering water. Since a lot of the field this week hasn’t fished a major tournament this late in the season before, I ask Robinson about how he approached his pre-practice and now official practice.

“I looked at this event like fishing early February on Chickamauga,” he says. “I was catching some good largemouth in these areas, but I don’t know if the dropping water has screwed them up or what. I started with about 16 rods on my deck when I first got to Cumberland and since then I’ve narrowed it down some, but I bet I’ll need to keep adjusting with the weather this week.

After covering some good-looking water with nothing to show for it, Robinson straps the rods down and heads for greener pastures. 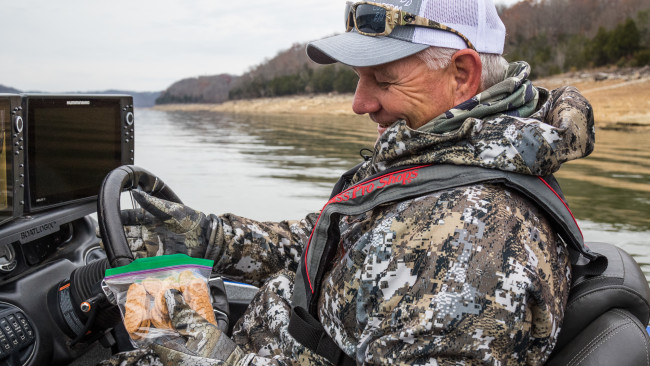 Idling around, Robinson pulls out a bag of cookies to help pass the time.

“You got to have snacks in the boat, especially when you’re not catching anything,” he chuckles. 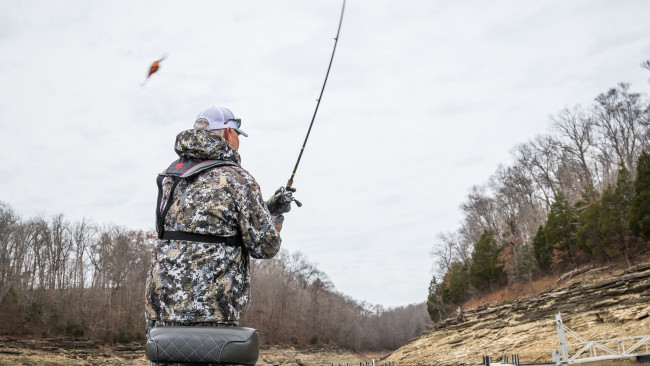 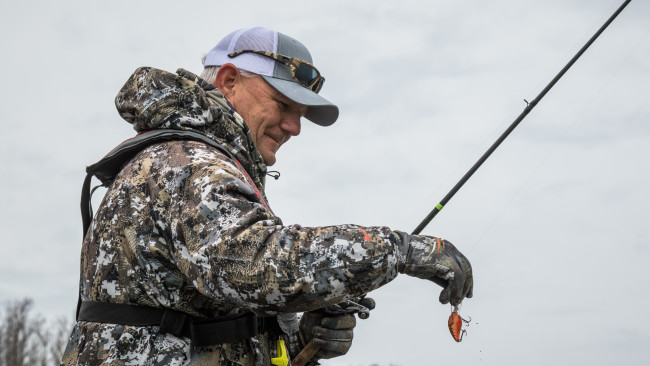 Robinson pulls into one last pocket before we head back to Burnside State Park. With our time winding down I ask him more about his decision to fish the Pro Circuit next year.

“I’m 55 years old, so I may be the oldest rookie out there next year, but I’m not nervous about fishing against those guys,” he says. “Not knowing the lakes makes me more nervous than anything. I’ll spend the time learning them, though.

“I said my wife is my biggest sponsor and supporter, and she is, but I need to thank the guys at McKee Outdoors in Maryville, Tenn., for all they do for me. I’m excited to have them helping me get my gear for next year and I’m really looking forward to getting the season started.”

As the clock ticks past noon, Robinson decides it’s time to head back to the ramp. 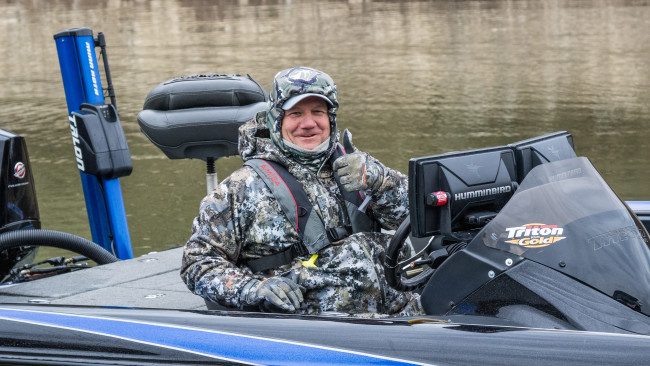 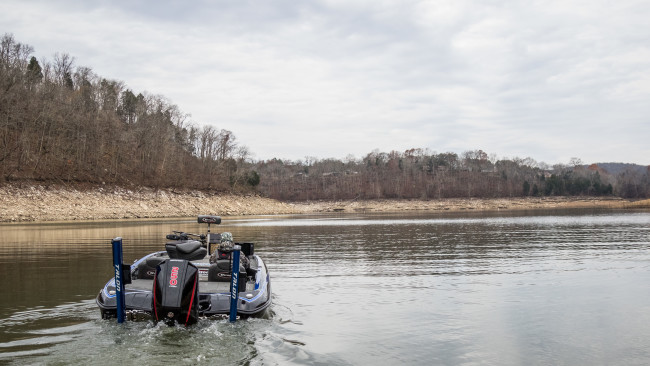 As we idle closer to the dock, Robinson leaves me with his thoughts on fishing the Toyota Series Championship for the first time.

“I’ve never fished a tournament as big as this one here is fixing to be,” he says. “This tournament changes lives and is really what can help make a career out of fishing for someone. It’s an honor to be here and I’m going to do my best to be on that stage on the final day.”

With two days of practice left, Robinson has plenty of time to get dialed on Cumberland. Despite not having a ton of experience at the Series level, he’s shown this season that he can hang with the best. Though he’s ready for what the future holds, he certainly hasn’t lost sight of what’s at stake this week and is as hungry as anyone to try and claim the $200,000 top prize.