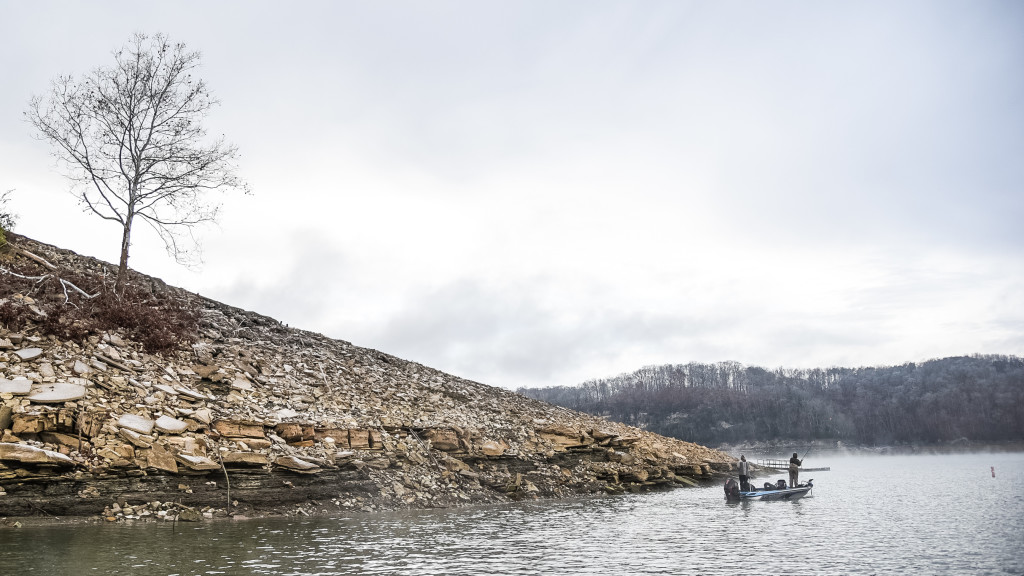 Nick Ratliff Photo by Charles Waldorf.
How the top pros are getting it done
December 3, 2020 • Justin Onslow • Toyota Series

It’s hard to pinpoint a predominant pattern so far in the Toyota Series Championship on Lake Cumberland. After one day, it’s pretty clear that any number of patterns and tactics could be the ticket to a $200,000-plus payday. Leading the way, Joe Uribe Jr. sacked up over 16 pounds with a crankbait, but that's not the only thing going.

Overall, it seems the shallow bite is what’s been making hay so far, whether it’s been finesse tactics targeting shallow rock or reaction baits wound around standing timber or on flats and points. From the upper end of the lake to the dam, green fish and brown, a little bit of everything is in play right now – as long as it’s up near the bank.

Here’s a look at how the top five caught them on day one. 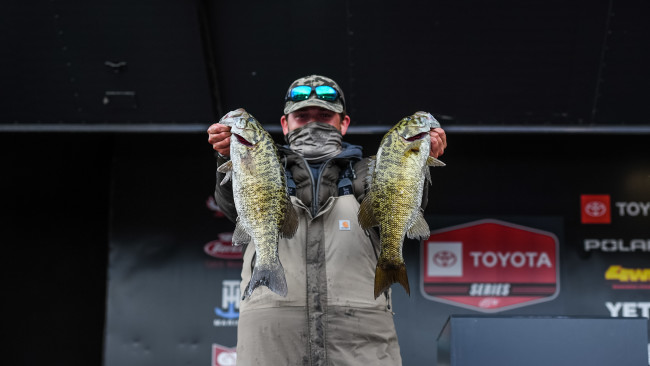 Vine Grove, Kentucky pro Nick Ratliff occupying the No. 2 spot after day one, just 4 ounces back from Uribe, is a somewhat ominous sign for the rest of the field. Ratliff is the very definition of a “local stick,” though he’s more than talented enough to be a force away from the likes of Dale Hollow and Cumberland.

But as far as local sticks go, Ratliff is the one to worry about this week, and he knows it.

“I’ve fished for this much money before, but I’ve never fished for this much money and felt like I was the guy to beat,” he says of his knowledge of and experience on Cumberland. “It feels really, really good. I kind of wish it was a different time of year. It’s so volatile this time of year. You can be a hero one day and zero the next day. I think the big thing is going to be being consistent this week.”

Consistency is what earned Ratliff a top 10 at Dale Hollow (another of his home fisheries) a month ago and, ultimately, a Toyota Series Championship berth.

The other part of that equation is Ratliff’s dedication to this event, with entailed taking multiple days off work per week leading up to off-limits to get in extra practice time. But even so, it’s stuff he found in the official practice period this week that helped Ratliff to a 15-14 bag on day one.

“I’m just honestly running around like a chicken with my head cut off,” he explains. “I’ve got probably 20 rods on the deck. I’m just fishing what feels right. Today, I caught them doing one thing completely different from what I’ve been doing the rest of the week in dirtier water, and tomorrow it may be opposite.”

That’s the benefit of local knowledge and familiarity with a fishery and the reason Ratliff should be considered one of the favorites to ultimately hoist the $200,000 winner's check in a couple days. 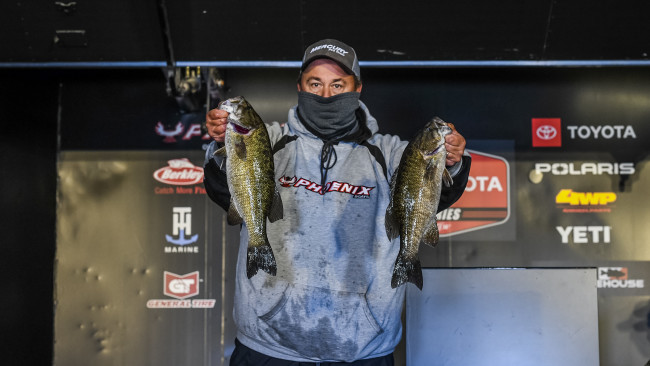 Another of the pros who made the top 10 at Dale Hollow a month prior, Chris Malone finds himself in good position this week with a 15-3 bag to start the tournament. He’s familiar with Cumberland, and he’s approaching this week with a fairly open mind.

With a short fog delay to start the day and the fact that Malone had a late boat draw, he decided to stick to the upper end of the lake, forgoing his best spots further down the lake for fear of someone already being there.

Starting close, Malone opted to fish some bluff walls – “nothing in particular,” he says – with a spinnerbait. He didn’t get a ton of bites, but he got the right ones to jump into third on day one.

As for tomorrow, it’ll be an early draw for Malone and a chance to further distance himself from the rest of the field.

“I’ve got a lot more water that I didn’t run that I’ll look at tomorrow for sure,” he says. “I’ve got plenty of fish. I just have to catch them.” 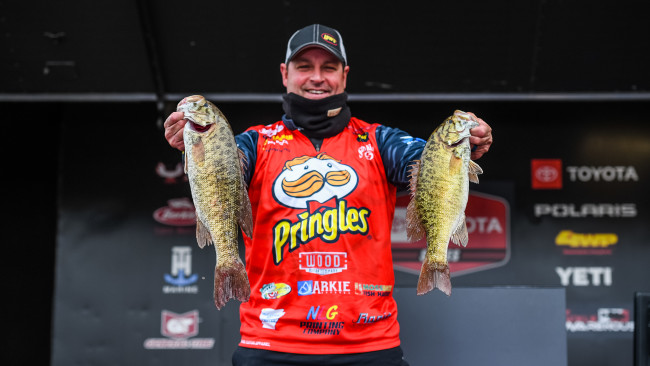 Tackle Warehouse Pro Circuit pro Greg Bohannan seems to make a check every time he fishes Cumberland, regardless of the time of year or water level. While things are different this time around – namely, that it’s early December and the daily highs barely make it into the 40s – he’s using his experience on and comfort with Cumberland to put himself in prime position for another big check.

This time around, Bohannan has decided he’s going to stick with one area as long as it’s productive. Today, that meant a “5-to-10-mile stretch” in which the Pringles pro was able to employ a few different reaction baits to sack up 14-13.

In that area, Bohannan was just fishing anything that looked good.

While rainy conditions tomorrow might change things up even more than they’ve already changed throughout the week, Bohannan isn’t worried. He’s looking forward to the challenge.

“Tomorrow is different conditions, but I’m excited,” he says. “I can’t wait to go.” 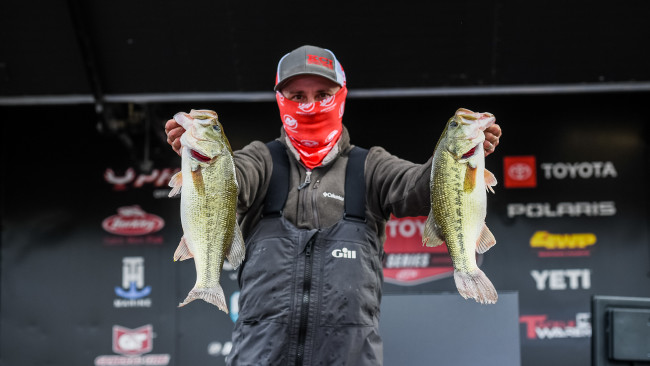 Kip Carter got his Toyota Series win on Wheeler Lake back in late July in his tin rig, fishing up shallow where other boats couldn’t get to. This week, he left the tin boat at home in favor of his Ranger, but he’s still focusing his efforts up shallow.

“It’s power-fishing techniques,” Carter says of how he caught his day-one fish. “It’s not finesse. I’m fishing shallow, and I had all largemouth.”

Back on Wheeler in July, Carter ran a lot of cuts and covered a ton of water. On Thursday, he stuck to one area – his only productive area – and he intends to do the same tomorrow, and hopefully Saturday if it comes to that.

“It was one of the toughest and most miserable practices I’ve ever had,” he says. “I was pretty bummed. I didn’t even know if I could catch one. They just bit, I guess. I had one area in my mind that set up right. It was the only place I caught anything in practice.”

Carter plans on running back to his best area tomorrow, and if it doesn’t produce, he’ll figure it out on the fly.

“This place is huge; I’ve seen it on TV,” he says. “Guys say it’s better just to settle down and fish, and I agree with that. Right now, that’s the mindset I’m going to keep. I’m not going to worry about it until it’s time to worry about it.”