Off and Rolling on Cumberland

Toyota Series Championship has over $200,000 on the line 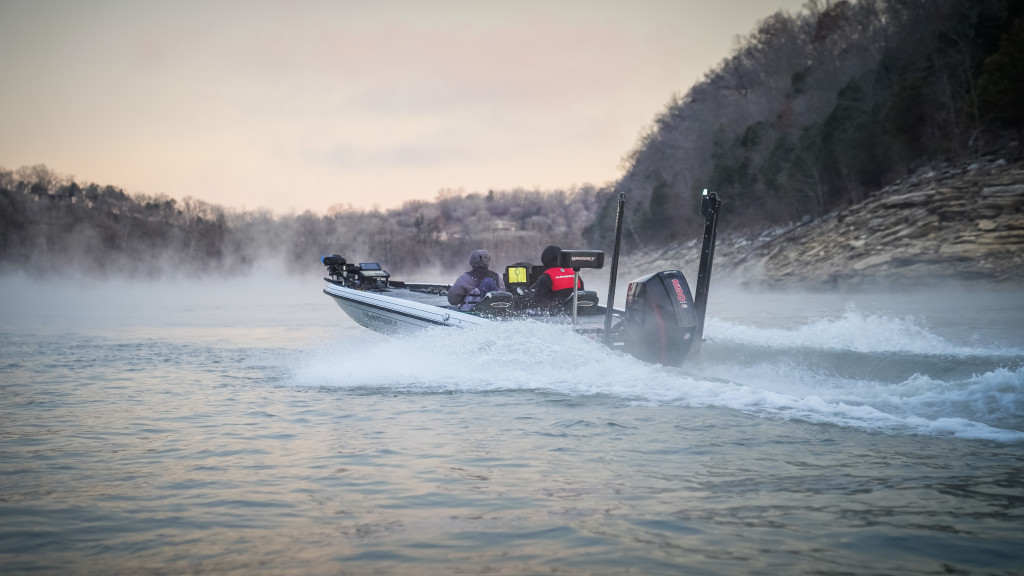 This is the second-straight year the Toyota Series Championship has been on Lake Cumberland, but this time it’s bigger than ever. With $200,000 cash on the line – plus a $35,000 FLW Phoenix Bonus if qualified – the field is more than ready to hit the water. Oh, and there’s also an additional $10,000 bonus for the highest-finishing pro from each of the eight U.S. Toyota Series divisions and the International Division.

Cooler weather has set in and likely will help kickstart the early-December bite. If all goes well, plenty of smallmouth, spotted bass and largemouth will be crossing the stage each day. 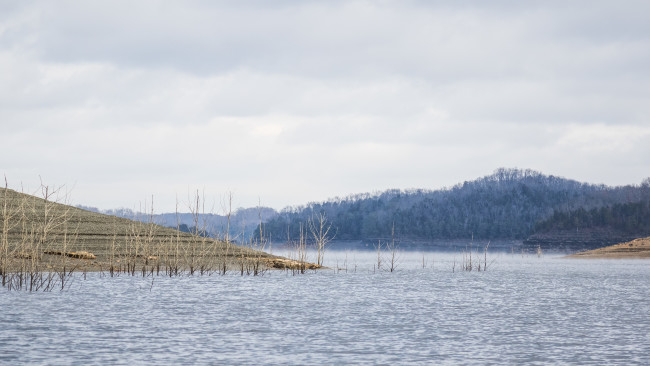 The ninth-largest reservoir in the U.S., Lake Cumberland is a perfect stage for the Championship. Home to all three bass species and over 1,000 miles of shoreline, the lake can swallow up a big field with relative ease.

Impounded in 1952 with the construction of the Wolf Creek Dam, Lake Cumberland serves as both a flood-control reservoir and a source of hydroelectric power generation. While Cumberland experienced issues with low water levels due to repair work being done on the Wolf Creek Dam back in 2011, water levels have returned closer to normal in the last five or so years with the completion of dam repair work.

Still, Cumberland is like other mountain reservoirs in that the water level fluctuates immensely. This week, the lake is about 30 feet below full pool. Though 30 feet sounds like a lot, and would drain most Florida lakes, it’s actually totally normal for Cumberland in the fall.

Cumberland offers great opportunities for targeting both largemouth and smallmouth (as well as spotted bass, though they aren’t likely to anchor anyone’s bag). With the smallmouth length limit being bumped down to 15 inches for this event from the standard 18 inches on Cumberland, you can expect to see a lot of brown at the scales. 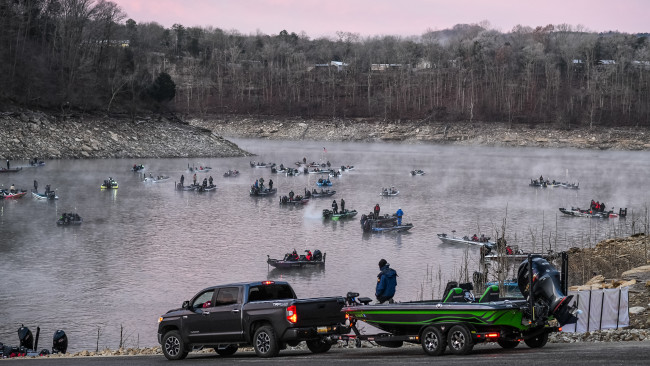 With a mild fall thus far, the cold front that brought snow and below-freezing temperatures earlier this week may have been the boost Cumberland needed to ignite a bite that has been mediocre thus far.

Ryan Davidson has spent plenty of time on Cumberland in the winter and knows just how important weather can be on this lake.

“All these high mountain reservoirs are very conditional,” Davidson says. “If we get the wind, and a good front rolling through, then these fish bite. That’s as important as the cooler weather. If Thursday and Friday roll around, and we’ve got 10- and 15-mile-per-hour winds, then we’ll catch ‘em in a big way.”

While today may not be as windy as predicted, the dirtier water found throughout the lake due to turnover may help the bite overall. With water temperatures in the mid- to upper-50s the “good” winter bite could bust open at any day. 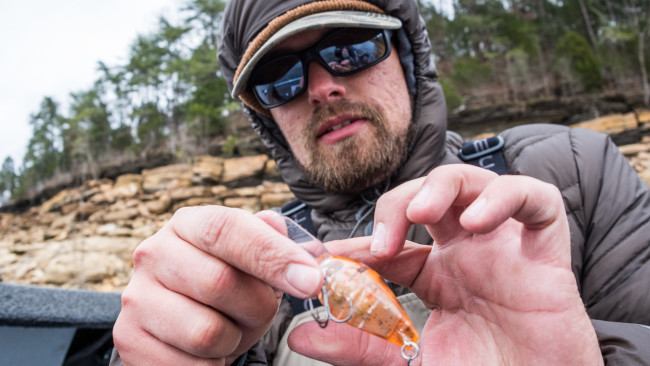 Last year, Andrew Upshaw won the championship with a jig on bluff banks. It was a classic mountain pattern and he executed it perfectly. Behind him, some pros flipped or wound up the river, but the predominant pattern was cranking for smallmouths down the lake.

This year, almost everything that worked in 2019 could work again, but perhaps with a more wintertime bent. In 2019, the predominant bait was a SPRO RKCrawler 55 cranked for smallmouths on rock in the lower end of the main lake. Other baits included such wild cards as a frog, a Berkley Choppo and a spinnerbait.

This year, with the weather colder, the traditional jig and cranking patterns should play well. Of course, smallmouths are always susceptible to a swimbait and a jerkbait, and you can’t count out finesse when 200-plus boats are involved.

While it hasn’t been a major player in practice, you can’t overlook the suspended-fish pattern with a spoon or Damiki rig. The bait has been positioned high in the water column throughout practice, but cooler weather could have pushed them down to where the bass are positioned better to be caught off of electronics and it’s definitely something to keep an eye on with the likes of Cody Huff, Jacob Wheeler, Spencer Shuffield, Nick Ratliff and Ryan Davidson in the field. 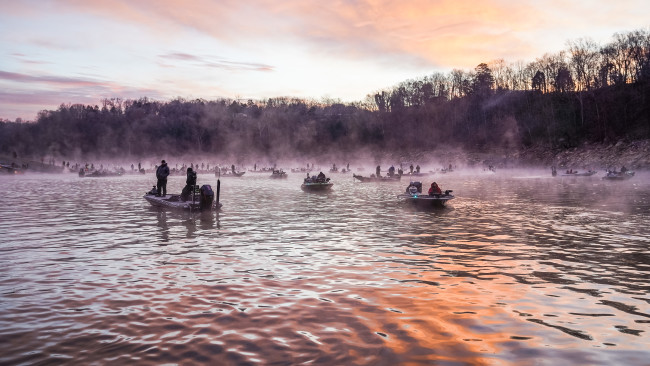 Cumberland has a rep as a difficult and conditional fishery, and practice has gone as expected. While some folks have done quite well, and a few have seen some truly excellent periods of fishing, there’s plenty of struggle out there too.

Greg Bohannan is fishing his 11th Toyota Series Championship. He’s also fished Cumberland a number of times before, most notably in the 2018 Tackle Warehouse Pro Circuit event that was a springtime spinnerbait smashfest.

“It’s been kind of a tough practice for me, but it’s getting colder and I think the bite will get better,” says Bohannan. “Like the Ozarks, its condition oriented here, and if we get a little wind I think it could be pretty good.”

From a weight standpoint, Bohannan just hasn’t seen the flashes in practice that would lead to big weights.

“I think it’ll take 14 pounds a day to make the cut, and probably a 15-pound average will win,” says the Arkansas pro. “It’ll be one of those tournaments where the weights are really bunched up, and catching a limit will be key, because they aren’t biting as good as I thought they would be. I got to see the lake at its best, when we had that spinnerbait tournament, and those fish could still show up.”

Frustrated by scattered, suspended fish and a lot of bait, Todd Walters has also had a somewhat lackluster practice – at least for the most part.

“This is my first time on the lake,” says Walters. “I came before cutoff and ran the lake for two days. I didn’t find much early in practice, but late in the day on the last practice day I found a few things that I like that that seem a little but different.”

Walters is looking for similar weights to what got it done in 2019.

“You’re gonna have to earn it for sure,” says Walters. “I think having something off the wall is going to be key. Either that, or you have to pull up at the right time on the right stretch. To win, I think it will be along the lines of what you saw last year, somebody will catch them pretty well.”

Markedly on the good side, Brent Anderson has had a phenomenal practice.

“I think it’s fishing really good,” says Anderson, who has guided from Kentucky to Florida. “It was pretty easy to get bites from smallmouth, and being able to weigh-in the smaller ones makes a big difference. You can’t just go down the bank and catch them, but once I figured out what they were setting on it was pretty easy. But they’re smallmouth and they change a lot.”

For weights, Anderson has his sights set high, and thinks that catching just a slightly heavier average is going to go a long way.

“There’s gonna be a huge difference between 14 pounds and 16 pounds, kinda like a St. Clair type deal, where those slightly bigger fish are a big deal,” says Anderson. “I haven’t figured out a way to target bigger fish. I’m going with trying to make the most casts on high-percentage places. I caught a few over 4 pounds in practice, but you might catch a 12-incher right beside them. It’s gonna take 50-plus to win, and 30 to make the cut. All these people that are telling you different are either lying or in the wrong part of the lake.”