Uribe in Front on Cumberland 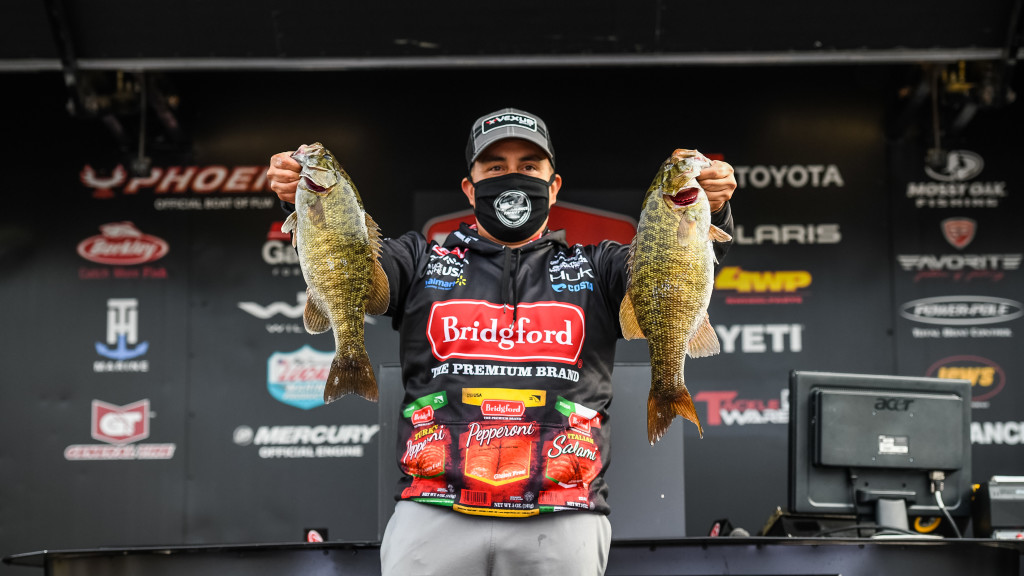 Joe Uribe Jr. is no stranger to rocky fisheries that feature big smallmouth, so seeing his name atop the leaderboard on day one of the Toyota Series Championship on Lake Cumberland shouldn’t shock anyone.

Then again, seeing Uribe’s name atop the leaderboard of any tournament should elicit the same lack of disbelief.

Since 2007, the Surprise, Arizona pro has qualified for every single Toyota Series Championship. He’s finished outside the top 15 in Angler of the Year points in the Western Division a grand total of one time (16th in 2014). In that span, he’s fished all but a few Championship tournaments (mostly due to the logistics of traveling so far from home to fish).

This year, after opting out of the last two Toyota Series Championships, Uribe says a ton of sponsor support ultimately made it a reality to fish Cumberland this year.

“Normally I’m in between boats,” he says of the timing of the Championship in a normal, non-COVID-altered season. “My new Vexus VX21 is currently being built. Vexus said ‘We want you to be out there.’ Bridgford said ‘What do we have to do to help out?’ They flew me out here and Vexus provided me a boat and truck to use for the event. I’m very blessed to have the support I have to be out here.”

That support allowed Uribe to do what he does best: catch bass.

While 16-2 isn’t a monster bag, it’s pretty close to that right now on Cumberland. A late, mild fall pushed typical winter patterns back, and the cold front that moved in earlier this week is just starting to drive down water temperatures and get fish in the mood to eat.

Uribe, for his part, didn’t have a lot of practice time to prepare for a fishery that seems to set up nicely for his skillset.

“I only had two days of practice, but everything clicked,” he says. “I started getting bit right away. I’ve literally got one rod on the deck and I’m just moving around.”

Because of the short amount of time he had to practice, Uribe says his plan is to use parts of each day to explore new water and new patterns.

Part of that is fishing an unfamiliar fishery at an odd time of year, but part of that is always looking for an added element that could boost his chances of winning. So far, all he’s needed is a crankbait and something that made him feel comfortable from the very start.

“The creek I’m fishing, when I pulled up there in practice – before I made a cast – I just looked around and thought ‘this looks good,’” he says. “It had a lot of variations of structure and depth. I felt comfortable with where I was.”

From there, it was all about covering as much water as possible in that creek, which Uribe says was fairly devoid of tournament boats on Thursday.

The plan for Friday is simple: Do much of the same thing that got him the day-one lead, explore some new stuff and hope the changing weather improves his bite even more.

“The weather’s been brutal, and It’s supposed to rain tomorrow,” he says. “Hopefully that’s a good thing.” 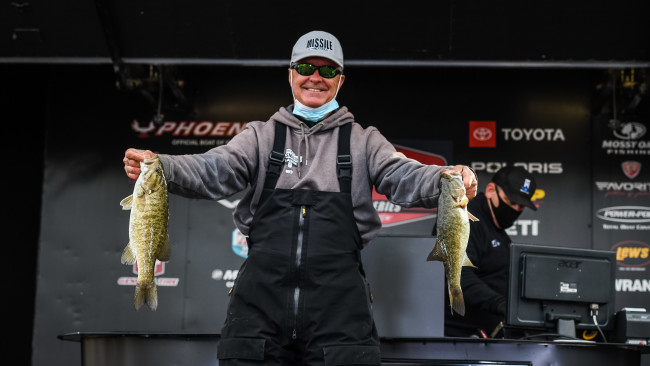 One of the few anglers on the co-angler side of things to catch a limit on day one, Don White of Columbus, Miss., dropped 12 pounds even on the scale to take the lead. With weights stacked pretty tight, White is thankful for the weight he has considering his day could have been a whole lot worse.

“Our boat broke down as soon as we pulled into the river this morning,” says White, who fished with Dick Parker. “We had to go to the bank and just go down the bank and I somehow caught them. So, I got lucky.

Having fished two divisions of the Toyota Series this year – the only six Series events he’s ever fished – White is relatively new to fishing at this level. Still, he’s fresh off a 13th place showing at the Phoenix Bass Fishing League All-American, so his lack of experience doesn’t appear to be slowing him down.

“It would mean everything to win this week,” he says. “I’ve only been doing this for two years, but it’s pretty good for an old man. It’s been a fun ride. I’ve been lucky and I’ve had some good boaters. Today was just an unfortunate thing and we turned it into lemonade and that’s the way it is.”