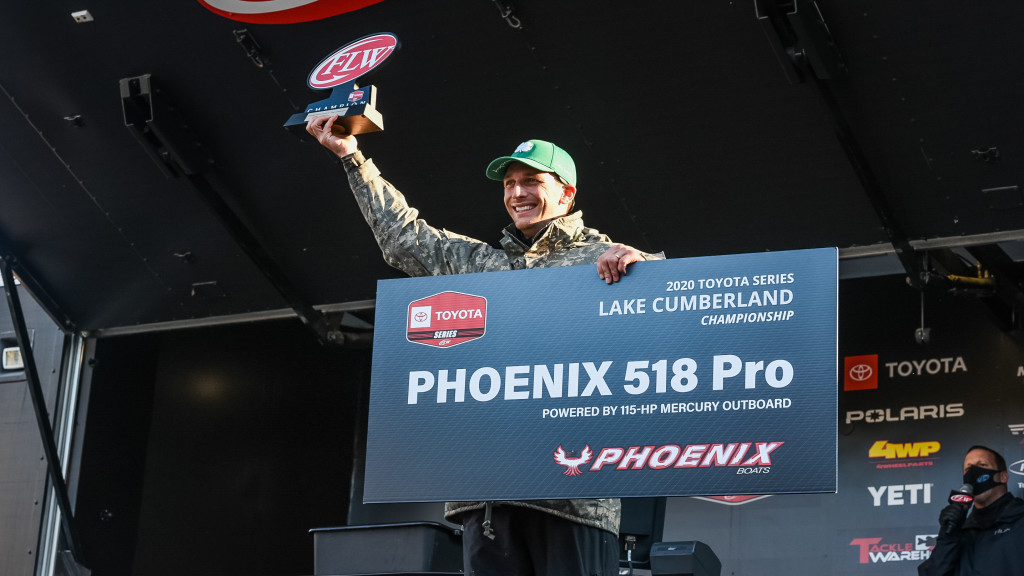 Matt Greene lives and breathes bass fishing. The majority of his 33 years on Earth have been spent near water, however, his job as a pilot in the Navy has limited his fishing over the last few years. But today, Greene secured the biggest win of his career today with a total weight of 24 pounds, 6 ounces worth of hard-earned bass on Lake Cumberland.

Though Greene only managed three keepers each day of competition, his weights improved every day. Weighing 4-3 on day one, Greene greatly improved that on day two to drop 9-14 on the scale. Today, he weighed 10-3, which was enough to easily claim the title of Toyota Series Champion.

Growing up in Virginia, Greene has worked his way around the U.S. and now resides in California. Time spent from one coast to the other has helped him hone the skills he utilized this week.

“I’m from Virginia and moved away in my mid-20s after graduating school,” says Greene. “I moved to New Mexico and fished there before joining the Navy. The Navy took me Florida, south Texas, back to Florida then Washington and I fished all along.

“I get these highland impoundment lakes. I grew up fishing Smith Mountain and below Smith Mountain is Leesville Lake, which is pretty similar to Cumberland. But I never practiced here and did a little research and saw smallmouth were the dominant species. It seemed like a drop-shot, Ned rig, crankbait and possibly a glide bait and a jerkbait would be possible techniques that would get you bit. So, that’s what I brought, and I just adjusted to the weather each day.” 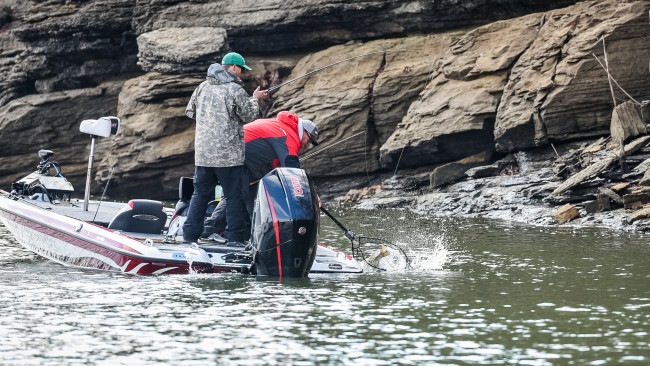 On day one Greene fished with Mikey Keyso, who was cranking in the river, so Greene grabbed a drop-shot with a green pumpkin amber Roboworm and essentially “swam it” back to the boat.

Fishing down the lake on day two, Greene picked up a glide bait and got better results. Today, the glide bait was what he locked in his hand.

“This place has trout,” Greene says. “So I knew between the trout, threadfins, the gizzards and the alewives they would eat larger baits. The water in the river was too dirty to throw it, but once you got to the mid-lake area and south it worked.

“This afternoon I pitched the glide bait, or flipped it or casted it behind the boat and they’d just come up and smoke it.”

A River2Sea S-Waver or Gan Craft 178 were the two main glides for Greene. He’d use the Gan Craft in the cleaner water and the S-Waver in dirtier water.

“I tried a drop-shot, jig, tailspin, underspin and all that stuff,” he says. “But most of my pros were doing that, so I didn’t want to do what they were doing. I just focused on the upper water column that my pros were leaving me and used a bait that can draw fish to it.”

Now the proud owner of a Phoenix 518 Pro bass boat powered by a 115-hp outboard, Greene is overwhelmed by what he accomplished this week.

“I’ve been doing this since I was 12, fishing night tournaments with my uncle," says Greene. "I’ve spent a lot of time driving and sleeping in my car for this. I fish out of a little Bass Tracker now that leaks, so this means a lot. It means a whole lot and I’m blessed to be out here.”