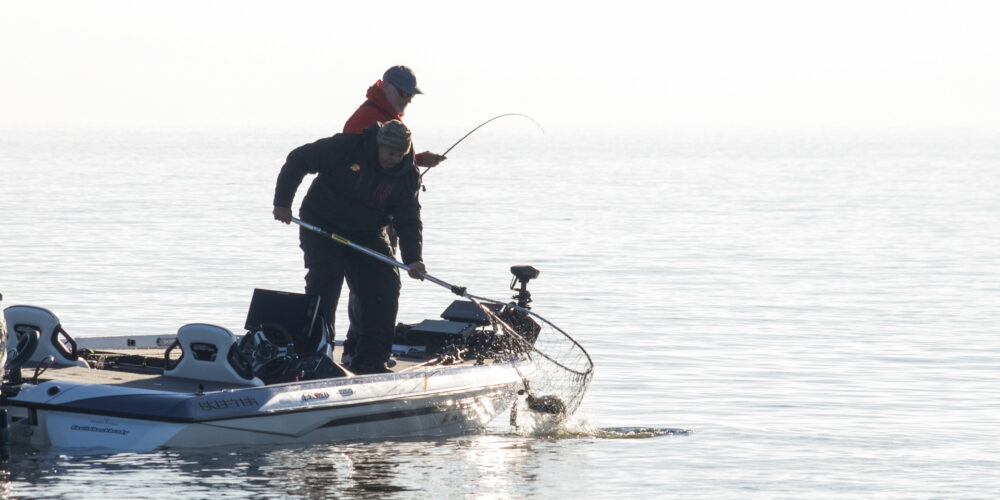 BROOKELAND, Texas – This year, the Toyota Series season starts in East Texas on legendary Sam Rayburn. The Southwestern Division anglers will take on a bit of a different challenge than we’ve seen in recent years, as the submerged hydrilla in the lake is more bountiful than before. So, while giant 28- to 40-pound bags are still in play, Dakota Ebare expects a lot more 15-pound bags as well.

Sam Rayburn has a reputation as a phenomenal bass fishery and a giant in the tournament world. At more than 114,000 acres, it’s the largest reservoir contained entirely within the borders of the Lone Star State. The Angelina River feeds Rayburn, which sprawls out into a typical Texas lowland impoundment that features timber, bushes, submerged hydrilla, plenty of bank vegetation, and, of course, lots of legendary Texas “drains” or ditches that are renowned for producing giant bass.

The lake is a flood-control impoundment, so it does experience high- and low-water years, fluctuating roughly 7 feet throughout a typical season.

Rayburn is an easy 20-plus-pound lake, where limits that weigh in the upper 20s are common, and 8- to 10-pound bass frequently make it to weigh-ins.

In addition to his status as the hottest thing in bassin’, Ebare is also a Rayburn local when he has the time. This year, he’s got high expectations for the winter bite on Big Sam.

“I fished a little tournament the first week of December, and the lake was 6 feet low and there was hydrilla growing everywhere,” Ebare said. “The bulk of the lake has hydrilla in the big, popular areas. It was really shallow then, now the lake is coming up, and a lot of that grass should be a big-time player.

“I really anticipate it being a great event,” he said. “Unless we get some crazy flood and it rips up a lot of grass, I have to think that guys are going to catch them pretty well,  just a good ol’ fashioned Rayburn Red Eye Shad derby.”

Some years, most of the Top 10 ends up fishing in the same area. Though that may turn out to be the case again, Ebare thinks there will be opportunity across the lake.

“I think the grass is going to open up a lot of options, it’s going to spread out the field,” he said. “Last year there was grass, but just in a couple creeks. Now, because the lake was low all summer and stayed clean, grass grew everywhere. I could see it so well when the water was low; it’s got some really good stuff with the way it grew in the drains, and how some of the hard spots surrounded by grass look.”

Of course, as much as an old-school lipless derby would be fun, it’s hard to count out the big-time offshore bite on Rayburn.

“Granted, Derek Mundy may blow the tournament out catching 25 pounds a day on a crankbait somewhere,” Ebare said. “I’m not gonna rule that out. All those guys that are traditionally good offshore fishermen there are going to have a shot, and it could be won that way. But, I really see the field as a whole catching them pretty good.”

As for how to get bit, Ebare thinks that cranking, lipless baits and offshore dragging will be the main players with an umbrella rig or jerkbait thrown in the mix for some more suspended or brush-oriented bites.

“If you want to go drag around, you’ll be able to do that,” Ebare said. “If you want to throw a lipless, you’ll be able to do that. I think a guy could win doing a little bit of it all, without a doubt. Getting a big bite early in the morning on a lipless or cranking, you could bounce back and forth and do a bit of it all. A Strike King 6XD will play, as always, a jerkbait for sure, and a Carolina rig. That’s the thing about Rayburn, you don’t need a whole lot of baits.”