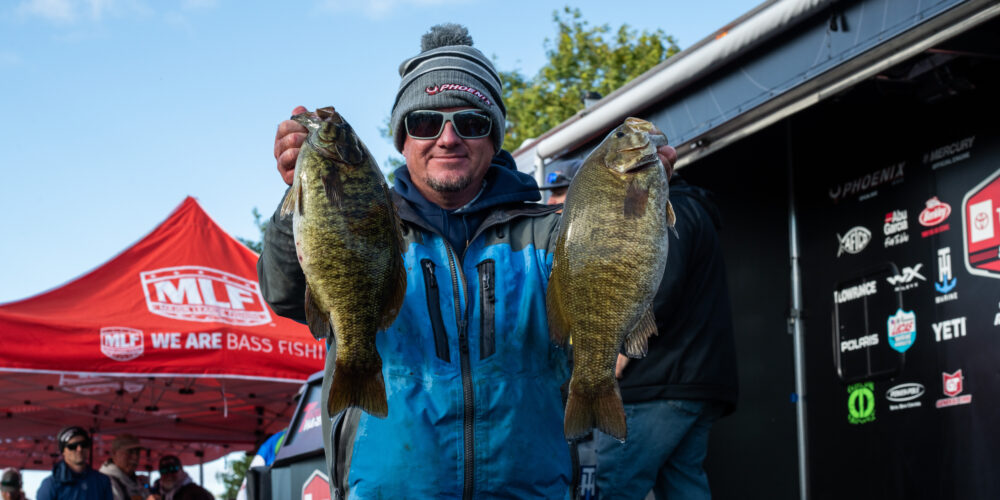 MASSENA, N.Y. – When the bite gets tough, that’s when local knowledge shines. That certainly was the case for Brent Anderson on Day 2 at the St. Lawrence River.

Yesterday, the Toyota Series Presented by A.R.E. Northern Division finale was looking to break records with the number of big bags weighed with 24 20-pound bags to be exact. Today? Still 17 bags over the 20-pound mark, but only seven of them came from anglers who did it yesterday, and of the six 23-pound bags yesterday, only two of those pros remain in the Top 10, with two more having not made the cut.

Needless to say, something changed. Even Anderson noticed that fact, though having guided on the St. Lawrence since July, he was still able to use his local knowledge to back up his 23-pound bag from Day 1 with another 20-9 to grab the lead with 44 pounds.

“I got a feeling really early,” Anderson said. “Yesterday, I threw several 3-pounders back before I had a limit. I was pretty confident – not that I was going to catch 23 pounds, but that I could catch 3-pounders if I needed them.

“My first drift this morning, I wasn’t seeing much activity. I was like, ‘something’s not right.’ I ended up keeping the first five I caught.”

If you ask most the field, the “something” that wasn’t right was the wind. A strong north wind in excess of 20 mph blew all day long, making it nearly impossible for many anglers to present their lures properly with the current.

Fortunately for Anderson, he says he’s drifted in every possible scenario on the river, so the wind direction and strength (while “a pain in the tail”) didn’t hinder him nearly as much as most everyone else. Just, for whatever reason, his fish got smaller.

“I caught a 5-1 my first fish and thought it was going to be another great day,” Anderson said. “That was really my only big bite.

“At one point, I had a 2-9 and one I didn’t even weigh. He was just ‘the smallest one.’ I made a run to a spot that’s been loaded and drifted there for an hour to get rid of those two. I never saw a fish.”

Fortunately, his next spot produced a 4-4 and a 3-10 to bump him up to his eventual weigh-in total, but a day after saying he’d be disappointed bringing in anything less than 23 pounds, Anderson was happy to survive such a tough day with another 20-pound bag.

As for Championship Saturday, Anderson says he still has a number of places where he can easily catch 16 or 17 pounds, including a spot in Ogdensburg, New York, that should clue him in quick on what to do to try and seal the deal.

“(That starting spot) lets me see how they’re acting and setting up,” Anderson said. “If they’re acting better, I’ll make a little further run to catch less fish but better quality – not too far a run, though, like some of these guys. It’s too much fun catching fish. I want a bait wet as long as I can.”