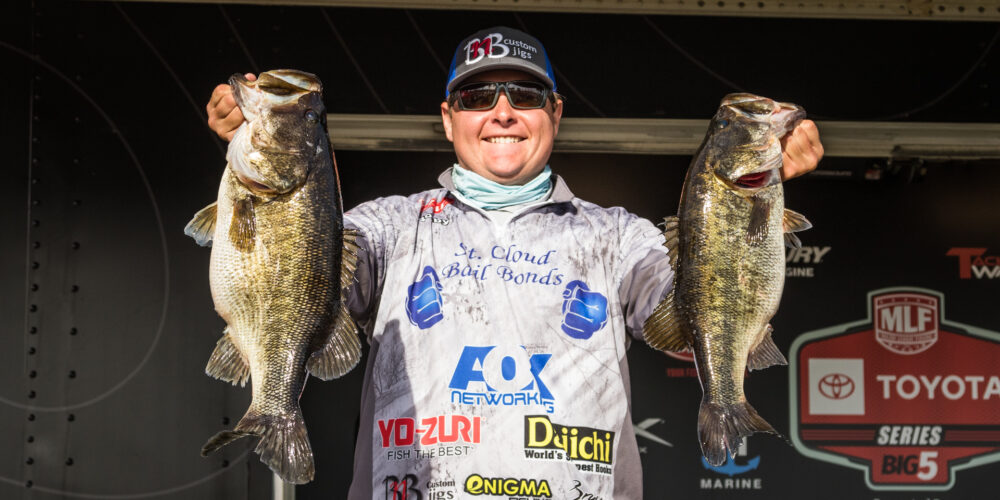 What would it be like to enter your first tournament as a professional angler, go out on the first day, catch the biggest five-bass limit of your life, weigh it in and take the lead?

Well just ask Bobby Bakewell of Orlando, Fla. Because he did just that today. Fishing as a pro for the first time in the Toyota Series presented by A.R.E., Bakewell sacked up 26 pounds, 13 ounces to take the day-one lead at the Lake Toho event, which is presented by Googan Baits.

“I fished as a co-angler before but this is my first time fishing from the front,” Bakewell says. “And to catch the biggest bag of my life on this day! I got news for you: I’m on cloud 9 right now; I’m ecstatic.”

After several practice days of harsh northwest winds, Thursday brought bright, sunny and still conditions. Air temperatures dipped below the freezing mark and some boats had ice on them this morning.

Bakewell’s solution to the wind-churned lake was to fish stable offshore areas that did not get torched by the wind. He says he’s fishing the same offshore pattern, both above and below the Toho lock.

“The baits and pattern are identical; I’m just doing it in two different areas,” he says. “I’ve got a place in Toho where I can catch a limit fishing that way early, then I lock through and run way south to another spot like the Toho spot.”

Bakewell left Toho with about a 15-pound limit. When he got to his other area, he culled up with 8- and 6-pounders.

“After I caught those two, I left my primary areas alone and went shallow to look around,” Bakewell adds. “I did cull up once more flipping, then I called it a day.”

While 26-13 sounds like an incredible catch for the day, Bakewell still has his work cut out for him the next two days if he wants his dream day to turn into a dream week. Just behind him are some racehorses that hauled in several 20- to 26-pound bags, with more on the horizon considering the warming weather.

If you think Bakewell had a magical day on Lake Toho, wait for the tale of Jeffery Baffa, who hauled in 24-11 to take the lead in the co-angler division.

Baffa fished with day-one runner-up pro Eric Conant. Conant weighed in 26 pounds, 7 ounces and Baffa, fishing right behind him, compiled nearly 25 pounds of bass from the back of the boat. That’s over 50 pounds of bass out of one boat.

Baffa has fished MLF events dating back as far as 1996. And his catch today was the biggest of his fishing career.

“What a day, I’ll tell you,” says Baffa. “Every time either Eric [Conant] or I set the hook, we’d say ‘Get the net, it’s a big one!’ And they really were all big ones! It was crazy. We laughed and joked all day long having the time of our lives.”

“My dad passed away two and a half weeks ago,” Baffa adds. “And he was my biggest fan. I couldn’t help but think he was out there with us laughing it up, too, watching us catch those big ones. It was a very, very special day and I dedicate it to him.”