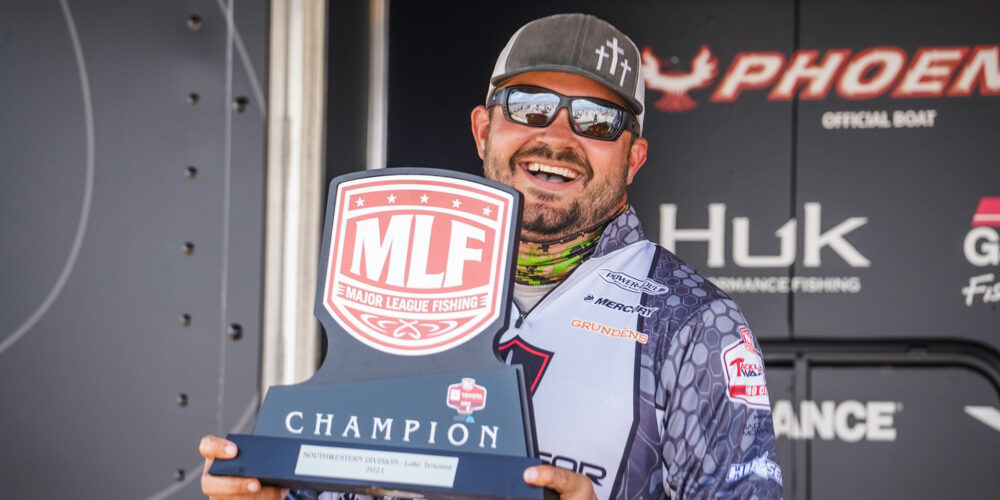 Putting another 13 pounds on the scale on the final day, Evan Barnes put the finishing touches on a wire-to-wire win in the Toyota Series presented by A.R.E. Southwestern Division event on Lake Texoma. The event, which was presented by Abu Garcia and hosted by Discover Durant, was tough on most of the pros, and even Barnes didn’t manage a limit on Day 2. Still, his total of 42-10 for 14 bass was plenty for the win, which is his first with MLF and worth a total of $40,906.

Winning any major event takes a pile of skill and often times a little good fortune. To say the Tackle Warehouse Pro Circuit pro was just lucky to win this week diminishes the accomplishment, but it’s unlikely that someone has ever won with quite the same story as Barnes.

To earn the win, the Hot Springs, Ark., pro had to show up first, which wasn’t a sure thing.

“I’ve had a tough year, on the [Pro Circuit], missing checks and stuff,” says Barnes. “This year, I felt like I was led to fish full-time and I made that big leap of faith. Because I’ve had such a tough year, and financially there were a lot of questions, I really didn’t know if I was going to come to this tournament. Like, I wanted to come, but, I’m telling you, I literally started praying. I was like ‘Lord, if you want me to come to this tournament, then you need to let me know.’ And I felt the spirit rise up in me, and I knew I was going. So, without Him telling me to go, I wouldn’t even be standing here today. It would take all evening to tell you everything that God has done this week.”

A pastor and a constant participant in Meet the Pros ministry events on the Pro Circuit, Barnes speaks about his faith as eloquently as anyone. On the final day, after catching nothing off all his best areas, his hopes of a win were slipping away.

“I didn’t have a bass at 1 o’clock,” says Barnes. “Man, I pulled up on this point, right by weigh-in, and I caught my first one. Just a small one, like a 2-pound smallmouth. I wanted to go back to my main areas and give them one more shot, but for whatever reason, it had to be the Lord, I just turned around and made a few more casts. I bombed that swimbait up and caught like a 4-pounder. We literally caught all of our fish over there, I caught my last one with 10 minutes to go and half the people here were watching me fish. It was just nuts –  I didn’t have a bass at 1 o’clock. Then I pulled up on that point and caught five and my co-anger caught four and we both win.

“It’s going to sound crazy to a lot of people, but I was fishing that point, thinking about going to that main spot, and just praying to myself,” says Barnes. “I was like ‘Lord, you know what I need to be doing, you know where I need to be.’ And I felt Him tell me to be still, and just hang out. And in the last 10 minutes, it happened.”

Barnes also entered the event at an interesting point in his career. His first three years as a pro on the FLW Tour and Pro Circuit were ones to forget, with triple-digit finishes aplenty. In 2020, he turned it around, finishing 23rd in the points and making the final day of the Tackle Warehouse TITLE. This year, Barnes has put up two finishes below 80th, which is not how he wanted to start his first season of totally full-time fishing.

“I told the guys at Mossback Fish Habitat last night that there would not be a better time in my career to win this tournament,” says Barnes. “It was so true. I’ve been worried financially, not in a terrible spot, but I’ve still got a lot of entry fees to pay and a lot of year left. After struggling again this year, mentally, I was almost back to where I was before last year. To win now, it solidifies it. It’s the Lord man, if He’s going to make it happen, you’ve just got to go with it.”

As far as the actual fishing goes, Barnes caught his fish off shallow brush and a pair of clutch points. For his tackle, Barnes used HI-SEAS fluorocarbon, Phenix Recon Elite rods and Daiwa reels.

Fishing mostly in Alberta Creek, Barnes’ brush fish were the most dead-ahead of the week. He simply targeted brush in less than 10 feet of water with a Duo Realis Apex Vibe painted by Curry’s Customs and a Black’s Custom Lures Widow Maker A-rig with three ¼-ounce heads from Motivated Fishing and 3.3-inch Keitech Swing Impact FAT swimbaits in the crystal shad color.

The brush fish were difficult to catch, and his Garmin LiveScope helped Barnes a lot.

“I think there were at least three or four fish this week I would not have caught without LiveScope,” says Barnes. “It was very difficult to get the fish to bite. You could see them everywhere, they were on every brush pile, and you could throw an A-rig out there and they wouldn’t bite. But every once in a while, you’d get one to track it, and one of the big ones I caught this week, I watched it track it, and finally I shook it right in her face and she grabbed it.”

The story of Day 1, and the entire event to an extent, was the flurry of smallmouth that Barnes ignited to stake himself the lead. With a few fish in the livewell, Barnes pulled up on a point where he’d gotten a few bites in practice and landed one 2-pounder.

“I rolled over there to that point, and the first one I catch is a 4-pounder,” says Barnes.

He and co-angler Billy Sammons proceeded to light the world on fire. At one point, Barnes had a fish breaking water with his bait in his mouth while he was getting ready to net a fish for Sammons. Somehow, not only did he not lose his rod overboard, he landed the fish.

“That just shows you,” says Barnes. “When it’s your time, you can’t do anything to stop it.”

His best smallmouth stretch didn’t seem particularly special, it wasn’t very deep, and it was rocky, but the fish were largely just there. With his boat in about 8 feet of water and casting into 4 feet of water, Barnes thinks the fish may have been spawning. Whatever it was, they really wanted a 6-inch Megabass Magdraft in the albino pearl shad color. Barnes did lose a fair number of fish on the swimbait throughout the week, and on the final day, he added an Owner treble as a stinger.

On the final day, with nothing else working, Barnes took his trusty swimbait to some new water.

“I just scrapped it all pretty much, and landed on this point by takeoff, “says Barnes. “And I just caught ‘em.”