Big Weights on Tap at the St. Lawrence 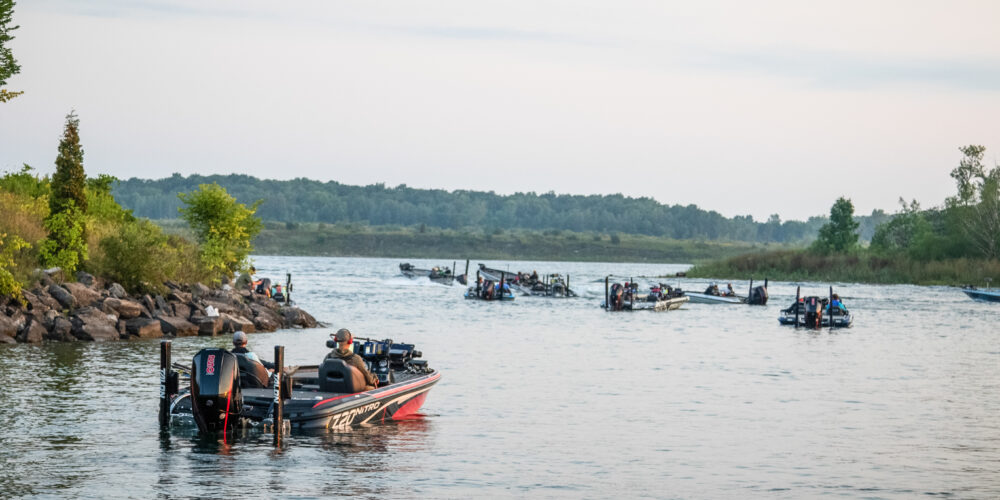 The second stop of the Toyota Series Presented by A.R.E. Northern Division should be another full-scale smallmouth battle as over 140 pros and Strike King co-anglers head out on the St. Lawrence River. Launching out of Massena, the Toyota Series event is one of many recent tournaments at the St. Lawrence, but Canadian waters are finally open for fishing, which will give anglers a lot more water to work with. Additionally, Lake Ontario isn’t off-limits for this event, which may or may not end up being a big factor.

The anglers will have the run of the river, but won’t be allowed to lock downstream into Lake St. Francis. While they are allowed into Lake Ontario, it’s a huge run that will eat up a ton of fishing time. As for the actual river, it has almost everything you could ask for in a northern fishery. There’s grass both deep and shallow, docks, tons of rock piles and current seams, sand flats, boulders and more. The focus of the event will be smallmouths, though a pile of green fish can be caught on the St. Lawrence, it’s not usually the route to a winning bag, as the river has a simply stupendous number of 4- and 5-pound brown bass.

A few weeks ago, the Tackle Warehouse Pro Circuit Presented by Bad Boy Mowers finished out the regular season on the St. Lawrence. Then, Ron Nelson caught fish on beds, and the shallow bite was an important factor in the event. Now, summer is well underway in the north country, and Pennsylvania pro Grae Buck says the deep bite is looking good.

“For me personally, it’s fishing better than it was for the Pro Circuit [event] a few weeks ago,” says Buck. “More of those fish have transitioned out deep and grouped up. It doesn’t necessarily mean they will bite, but they’re out there – you can drop an Aqua-Vu on just about any of those shoals and humps and see them.”

The interplay between deep and shallow fish is always interesting to watch on the St. Lawrence. It’s one of a handful of fisheries where big bags can be caught in 5 feet or 45 feet on the same day. Former St. Lawrence winner Wayne Vaughan thinks the answer to “deep or shallow?” is both.

“I think there are a fair amount of fish that have gotten out, they’re going to be a player,” says Vaughan. “But, the guy that loves to fish deep, or the guy that loves to fish shallow, they can be in contention if they get on the right stuff. This place, there’s always a big group of fish that likes to stay shallow, they call them ‘dirty nickels.’”

Is the Lake in Play?

In recent years, whenever Lake Ontario has an opportunity to play in an event, it does. Still, this is a unique scenario, with a run of almost 100 miles being necessary just to get to the mouth of the river. A three-time Angler of the Year in the Northern Division, Cory Johnston is a little torn.

Despite that, Johnston has a lot of experience in the lake and is planning to run out and swing for it on Day 1.

“I’m about 75-25 on what I’m going to do,” says Johnston. “It all depends on how my morning goes really. If it goes as good as I hope, as I expect, it could be an early ride back and I’ll hit a lot of shallow stuff on the way back. These fish are moving a lot right now, and you have to hit a lot of spots and hope you land on them, because you’re not going to have a lot of time to fish.”

Buck went ahead and put the lake mentally off-limits from the get-go.

“I came up on Sunday, and I kept telling myself I wasn’t going to Ontario,” says Buck. “I actually listened to myself and I never made it out to the lake. That’s where I want to go, but if you do that, you’re not going to have much time to fish. You’re going to have to really be on them, and my biggest concern was that when you make it there it’s flat, and they don’t bite as well and set up as well like they do when it’s blowing out there.

“I think it’s hard to beat Clayton,” says Buck when asked what stretch of the river will be hottest. “That’s the section of the river that has the most going for it, and being able to fish Canada is going to make that open up way more. I would guess that’s the section it will get won out of. But there are plenty of fish in the river up near Waddington, I found a couple of spots I’m really impressed with. There’s one spot I’m considering stopping on in the morning, and if it works out I wouldn’t have to make the long run.”

Despite saying he’s not on ‘em, Vaughan is pretty sold on the lake.

“I really do believe the guys that go to the lake are going to whop them in a big way,” he says.  “There’s so much stuff out in the lake that truthfully hasn’t been fished in two years. When the Elite Series was allowed in the lake, like seven of the Top 10 were out there, and that was without touching the Canada side.”

Lake, river or both, everyone agrees this event is going is going to take some serious weight to win.

Buck thinks the magic number is going to be about 70 pounds.

“I think it’s going to show out,” he says. “I don’t know if all the weights will be strong, but I think somebody is going to catch them.”

Johnston figures on 72 to 74 pounds to win. Shooting for 25 pounds on Day 1, he sounds like a man on a mission.

“The fishing is incredible right now,” he says. “You’re going to need some serious weight to win this thing.”