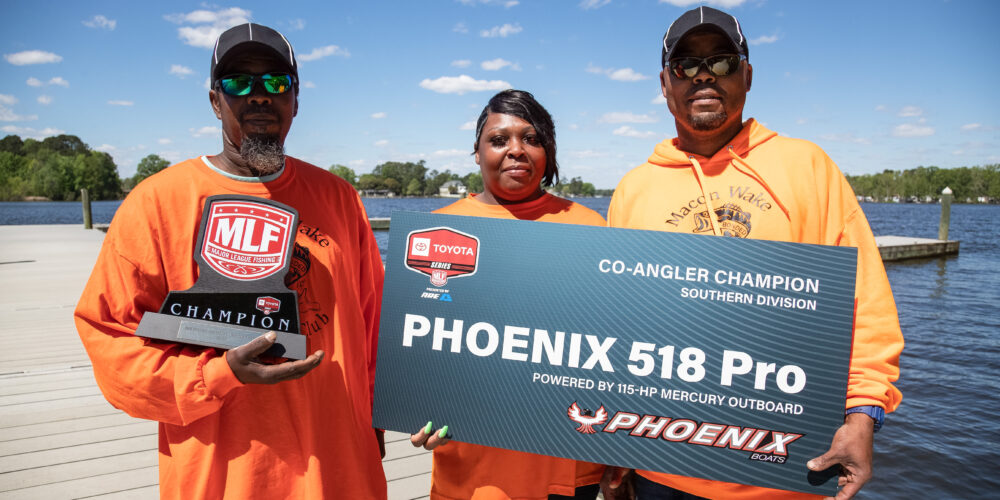 SUMMERTON, S.C. – Four fish was all it took for Andy Bond to take home the Strike King co-angler win at the  Toyota Series Presented by A.R.E. Southern Division event on Santee Cooper. While one fish shy of a limit, he still tipped the scales with 18 pounds, 12 ounces. Rodney Tapp took second place with 18-3 and Lonnie Drusch brought home bronze with 17-10.

Originally a three-day event, the tournament was cut short due to weather after the first day of competition.

“With a small-craft wind advisory in place from noon today until 7 p.m. tonight, and that happening again tomorrow, we decided it was best to make it a one-day tournament,” said Tournament Director Leroy Hensley. “It’s not what we wanted to do, but it’s what was best for the anglers so we had to stick with it.”

Co-angler champion Bond is happy with the results but would’ve liked another crack at a few of the giants swimming around Santee Cooper.

Bond found success by targeting fish spread out across different stages of the spawn along steep banks and grass lines.

“Here you have everything – postspawn, prespawn, all the fish moving in and out,” Bond said. “Once I decided to slow it down and we got around some beds, we could see that they hadn’t pulled up on them yet, but they were headed that way.”

He was able to get off to a fast start by slowing down his presentation and catching fish that other anglers were missing.

“During practice, we started off with crankbaits, spinnerbaits and jerkbaits,” Bond said. “It didn’t seem like they wanted to react to it, so I decided to slow it down. A lot of guys were around the fish, but they were moving too fast”

He switched to a Texas-rigged lizard, paired with a 3/16-ounce weight and a 4/0 hook.

“A bass can’t stand a lizard, and that was my go-to bait,” Bond said. “All of my buddies call me ‘Junebug’ because that’s the only color I’ll use.”

His lucky color came in clutch, resulting in first place, a brand-new Phoenix bass boat and an extra $1,250 in cash on top.

“I can’t wait to get the new boat out and break it in,” Bond said. “The win hasn’t really sunk in, but I feel really good about it. All of the hard work finally paid off.”