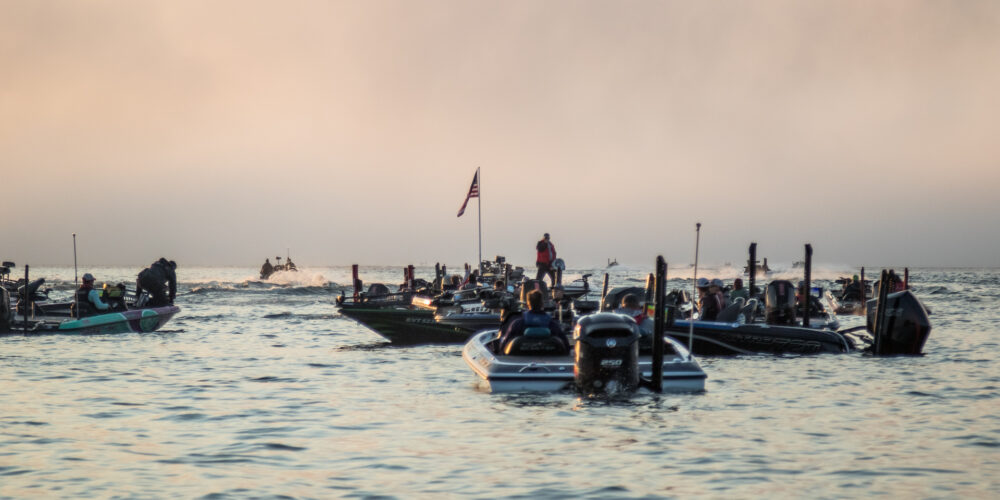 With 187 pros and Strike King co-anglers on hand, the Toyota Series Presented by A.R.E. Northern Division is kicking off in style. Great fishing is expected in the season opener on Lake Champlain, and the next three days should be a fantastic kickoff to the season.

At more than 100 miles long, Champlain offers plenty of options; it’s not hard to find something in your comfort zone no matter what you like to do. Plattsburgh, where the tournament takes off, is a great place to be for access to the plentiful smallmouth in the more open areas of the north end, and it provides equally convenient access to the largemouth in the bays. The only issue is getting to the largemouth down south near Ticonderoga (Ti), which involves a 60-mile run over a lake that can get extremely rough at times. Dirtier and grassier, Ti has a well-earned reputation as a great place to go to win or at least make money, but it hasn’t been as good in recent years. In 2019, Casey Scanlon won an FLW Tour event at Ti, but the 2020 and 2021 Bassmaster Elite Series events on Champlain were dominated up north.

From a cover standpoint, Champlain has all the usual northern things. On the grass side, the most usual cover is big-leaf pondweed or Eurasian watermilfoil. The milfoil in particular is great cover for both largemouth and smallmouth, and flipping it can be productive at both ends of the lake. Down south, there are also cheese mats in play at times and coontail to contend with. The lake also has a variety of reeds and pads, but they don’t typically play a ton, and the low water this year will make them less of a factor. In addition to the plentiful grass, Champlain is loaded with rock of all sizes at any depth. As an added bonus, scattered wood and docks provide some extra bass cover.

Unlike Oneida or the Great Lakes, the forage base on Champlain hasn’t been dominated by gobies. While that day may come, perch, alewives, crawfish and sunfish are mostly what the bass are eating these days. Notably, smallmouth have taken even more of a center stage in recent years. While Bryan Schmitt won with a mixed bag, a number of pros in last week’s Elite Series event legitimately threatened for the win with all brown fish.

This year, the lake is low and the bass are chewing. Though the water level is about what it was this time last year, Champlain is currently about 1 foot below the average. A foot of water here or there isn’t anything to worry about in the mountains of Tennessee, but it’s a lot on a lake like Champlain. Recently, a good bout of rain has alleviated some of the drought conditions in the area, and the lake isn’t really falling at the moment, but there are still some navigational issues at certain causeways and river mouths, and many of the docks and rocks are a lot shallower than usual.

With water temperatures in the upper 60s and low 70s, there’s a lot on the table at the moment. One thing on the minds of everyone in the field is the recent Elite Series event – five pros had more than 58 pounds through the first three days and Schmitt had a stunning 62-4. In the end, the weights turned out to be tight like usual, but a tougher final day kept it from getting too out of hand. Notably, smallmouth did very well, and Keith Combs nearly won with brown fish caught on a topwater.

“My kid and I fished [a tournament] a couple weeks ago and everybody that did well had largemouth,” says JJ Judd, who hails from St. Albans, Vermont. “My buddy Craig caught 17 pounds of smallmouth, and they’re all nice fish, but super skinny. I thought those Elite Series guys would be catching a lot of fish and they would be skinny, but they weren’t – they were big fish.”

Those smallmouths, already heavy for early July, have convinced Judd that a lot is on the table this week.

“I think it’s all over the place,” says Judd of Champlain’s current status. “This morning I was fishing shallow in the Inland Sea, trying to find a morning bite, and I looked down and there was a fish on a bed. But, I’ve also got a couple spots where they were postspawn a week ago and they’re in 30 feet of water. I think they’re spread out and you’re going to be able to fish whatever your strengths might be.”

The only thing Judd isn’t high on is the largemouth bite. Not planning on investigating Ti, he also hasn’t found the shallow grass bite like he’d like.

“I honestly don’t see the largemouth playing that much this time – originally I thought they were going to, but the good grass isn’t quite there yet,” Judd says. “I think it’ll be a smallmouth slugfest, like the Elite was, because there really isn’t much for grass like there used to be. Some of the most beautiful milfoil patches don’t even exist anymore. I used to win tournaments on weed beds where I can look down and see the bottom on now and there’s not one piece of grass.”

Still, Judd isn’t willing to totally discount green fish. Schmitt caught a lot of big largemouths in his win, and there’s a lot of history that says largemouth are key to bringing home the win on Champlain.

“The only largemouth that I’ll be fishing are all in that 20-foot range, and they’re areas I don’t practice,” Judd says. “Hopefully I can get on the smallies good enough that I can do that, because I think if someone can get four smallies and one big largie a day, he’s going to be doing the right thing.”

Recent history says that folks running to Ti won’t be much of a factor this week. In the last two Elite Series events on Champlain, running to Ti was basically fruitless in one way or another for the pros who went. Still, for folks schooled on the lore of Champlain, there’s a lot that says Ti can be viable, and it isn’t locked in that a bad week down at Ti can’t be followed by a good week. As an example of how changeable it can be, the 2019 season is a good one. At the very end of June, Scanlon won down at Ti and a bunch of other pros did well making the run. Then, about 20 days later, Bryan Thrift won a north-dominated FLW Series event with 57 pounds.

This year, the viability of Ti is likely to be a mystery until weigh-in on Day 1, as the reports from practice are pretty mixed.

For one, Judd isn’t planning on checking it out at all.

“Maybe somebody like Bryan Labelle has gone down there and figured it out,” says Judd of Ti. “But Jamie Hartman called me after the [Elite Series] tournament and said he went down and practiced Ti and said it sucks down there.”

Wayne Vaughan hails from Virginia and won the 2019 FLW Series event on the St. Lawrence and has made the Top 10 on Champlain before. Despite his love for smallmouth, he had to eliminate Ti at the beginning of his practice.

“I largemouth fished when I first got here. I started down at Ti and I caught some fish,” Vaughan says. “I was there for two days and had a nice bag of fish the first day, but it was just a good day of fishing. I didn’t feel like I could go do it again.

“The grass is in rough shape down there. It’s bad,” Vaughan opines. “I know Thrift went down there today, and at 1 o’clock he was putting it on the trailer saying, ‘I can’t be down here.’ For me, I just don’t feel like I could go down there and do much.”

One of the breakout stars of 2020, Kurt Mitchell has a lot of experience on Champlain and made sure to check Ti out.

“It can go down there, but if it does it’s gonna be in the first two miles after the bridge,” he says. “Everywhere else the grass is scummy and too scattered, and the water is too off-colored in the deeper grass where you would normally find the big groups of big fish. The first two miles after the bridge look pretty good, though, but the fish I caught were long and skinny.

Champlain always offers a lot of range for anglers to explore, and this year is no different. With both species in play on the north end and largemouths certainly in the mix if an angler decides to go south, putting 20 rods on the deck and using them all isn’t out of the question, even if it might not be the best way to actually get paid.

For folks running to Ti, grass-type baits will dominate. Flipping baits, vibrating jigs and frogs will be abundant. There are also sure to be some fish caught off hardcover down south and crankbaits and jigs will probably get the call for that.

Up north, there’s a lot more mystery. Carolina rigs are always good for the smallmouths in the summer, and the usual finesse offerings are going to catch bass. Depending on the weather, a spy bait might make some waves as well. The topwater bite was on fire last week, so bigger walking baits should play, as well as jerkbaits and swimbaits to trigger active fish.

If you’re hunting largemouth up north, the best bets are usually a stick bait or something to flip. For deeper largemouth not really in classic milfoil beds, a jig or something on the finesse spectrum can be a good way to go.

The fishing on Champlain is sure to be good, but just how good remains to be seen.

“Those guys are so good,” he says of the Elite Series pros. “I hope it doesn’t take weights like that to cash a check this week, but I think it’s gonna take probably 19 a day to make the cut. If you can have a mixture of the shallow bite and the medium to deep bite and mix it up throughout the day, I think you’re headed in the right direction.”

Vaughan also thinks the weights won’t quite stack up to the Elite Series, mostly because he’s seeing the red-hot topwater bite starting to die off.

“Today, they bit better than they have, believe it or not,” he says. “I’m still not catching a lot, and a lot of them are really poor. Like, you’ll catch one that should be a 4-pounder and it’s 3 1/2. I don’t think those weights can happen.

“Some of the guys in that tournament are great fishermen, and some of them are amazing smallmouth fishermen. It seems like, to me, a lot of fish were caught shallow in the tournament, a lot of smallmouth, and I think every day those fish are walking away from that. I think every day there are more and more going away. Each day I’ve gone and fooled with that there are less.”

One man on the high end is Plainfield, Vermont angler Jimmy Kennedy who thinks the fishing will pack a real wallop.

“I’m going to go big because it’s been fishing well,” says Kennedy when asked for a winning weight. “I think it’s going to take 60-plus, probably 62 to 64 pounds. I think someone is going to be on ‘em that good.”