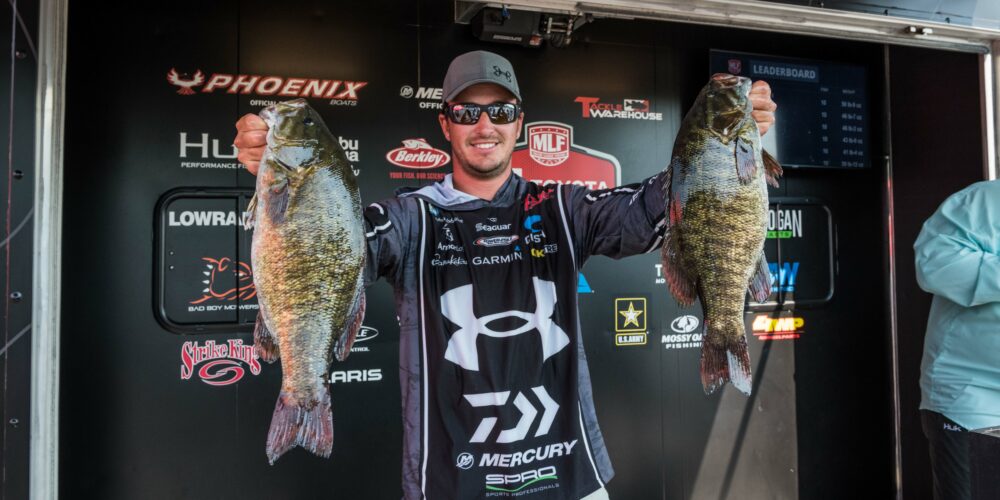 Putting another 25 pounds on the scale on Day 2,  Chris Johnston is well ahead of the rest of the crew at the Toyota Series Presented by A.R.E. Northern Division event on the St. Lawrence River.  Backing up a 25-7 catch on Day 1 with 25-2 on Day 2, Johnston has totaled up 50-9 for the lead.

Between the two of them, Chris and Cory Johnston used to basically run the Northern Division, making Top 10s at a ridiculous rate and winning five Angler of the Year titles between them. Somehow, they’ve never gotten over the hump for a Series win on their home fishery.

“I’m in a good spot, I’m not going to complain,” Chris Johnston said. “You never know what can happen out here, some of my spots I’ve checked have been empty. You could roll up to your first three spots and they’re just gone. It’s scary that way, I’m not on one spot with 50 fish and I’m just going through them.”

Even with a good cushion and two 25-pound days behind him, Chris Johnston has enough negative history on the 1000 Islands that he’s not celebrating yet.

“I’m snakebit here, on this circuit,” Chris Johnston admitted. “I’ve never won a Toyota or Costa, whatever you want to call it. And, I think I’ve led this one in particular three or four times and blown it. I can’t seal the deal, this one is my nemesis.”

Nemesis it may be, but Chris Johnston is still dang good at catching big smallmouths and knows the river and Lake Ontario like the back of his hand.

“It was rough running in the river, so it took a little longer to get to where I wanted to fish,” he said. “I caught two in the river, then I ventured out into the lake and didn’t have much time to fish. It wasn’t as easy as it looked from the weight. In the last couple minutes I caught my biggest one, probably a 5 ½, and it culled out a 3. I didn’t get a lot of fish like yesterday, but it had three bigger ones than I had yesterday.”

Fishing mostly deep with a drop-shot, Chris Johnston says he only fished for about 3 ½ hours today after all his running.

“I kinda scrambled and caught a couple,” Johnston said. “If it’s calm tomorrow, I’ll probably put all my eggs in one basket and run to the lake. Today I hit like three or four spots; tomorrow, if I can hit seven or eight, I should be able to run into a good group of them somewhere.”