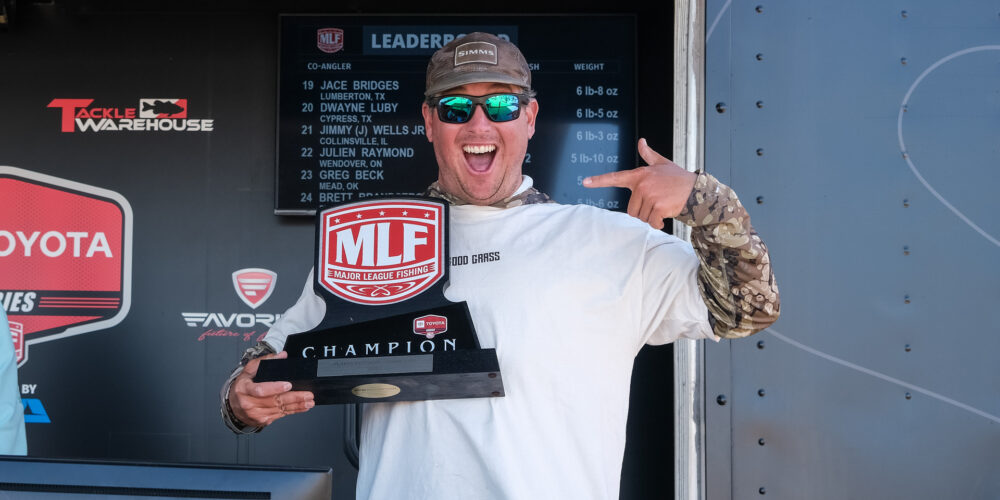 KINGSTON, Okla. – Inclement weather and strong winds in excess of 30 mph swept across the nation the past several days, forcing tournament cancelations and delays state-wide across several Major League Fishing (MLF) circuits, including the Toyota Series Presented by A.R.E. at Lake Texoma Presented by Outlaw Ordnance. Originally scheduled as a three-day tournament, the first two days of the event were canceled by tournament officials due to inclement weather – a first in Toyota Series history. However, that was of little concern to pro Rick Harris of Del Rio, Texas who faced the elements for the one-day shootout on Saturday to bring a five-bass limit to the scale weighing 21 pounds, 13 ounces and secure the win.

“I had a decent practice prior to all the wind and weather coming in, but I think the two days being canceled actually helped me,” said Harris. “A lot of the things you plan for a three-day event just go out the window in a one-day tournament, so you either make it or break it.”

Harris’ limit of 21-13 gave him a three-pound margin over second place Tackle Warehouse Pro Circuit and Phoenix Boats pro Jeff Reynolds of Calera, Oklahoma, who finished the day with a five-bass limit weighing 18 pounds, 13 ounces. While the three-pound gap between first and second place at the end of the day may look as though it were a ‘slam dunk’ for Harris, the Texas pro said that couldn’t be further from the truth.

“I started the morning in Highport and there were a ton of boats in there fishing a high school tournament,” said Harris. “I fished in that area all morning, but never got a bite. I made a move to Big Mineral and caught a 2 ½-pounder on a ¾-ounce BOOYAH Covert Series spinnerbait with a Hayabusa Trailer Hook pretty quickly, but didn’t catch another fish for over two hours.

“Around 1:30 in the afternoon I had just decided to leave that spot when I caught a 6-11 on my Ark Tharp Series Casting Rod 7’ Fast Hammer. That gave me a little hope that I could salvage out a limit and finish well.”

With only two fish in the box and the time clock ticking, Harris was on the hunt for more bass – and more water.

“I ran around for over an hour and a half, just trying to find an area where there wasn’t a boat – everywhere I ran there were six or seven boats,” said Harris. “I tried fishing those places, but it just wasn’t working.

“Around 3 p.m. I was running back and remembered I’d found a fish on a bed earlier in the week, so I pulled in that pocket to see if she was still there. She wasn’t, but as I was about to leave, I pitched my bait and caught a 3-pounder on a point.”

With only 20 minutes left until check-in, Harris said he decided to spend the remainder of his time fishing down that bank.

“We had planned to leave there at 3:25, and I’d told my co-angler, ‘this is my last flip, get your things ready to go’”, said Harris. “I made a flip and hopped a homemade jig with a green-pumpkin-colored Reins Ring Craw trailer, and got nothing. As I’m reeling the jig in and turning the boat away to leave, I see a 6-pounder following my bait.

“I flip back in there with my Ark Tharp Series 7’6” Heavy King Cobra rod and catch a 3-pounder – put it in the box, flip in there again and catch a 6-pounder – then we raced back to check-in, where we made it with only 30 seconds to spare.”

With mere ounces separating second through fourth place, losing either of those two fish would have meant an entirely different outcome for Harris, who is celebrating his first MLF win.

“I had three in the box and was heading back to check-in without a limit – that just blows my mind,” said Harris. “It’s been very humbling to receive all the calls and text messages after winning the event. When we went to bed that night, I had 280 text messages to reply to – I still can’t believe it.”

Reynolds took home an extra $1,000 as the highest finishing Phoenix MLF Bonus member. Boaters are eligible to win up to an extra $35,000 per event in each Toyota Series tournament if all requirements are met. More information on the Phoenix MLF Bonus contingency program can be found at PhoenixBassBoats.com.

Lee was the Berkley Big Bass $150 award winner in the Strike King co-angler division, with a 6-pound, 3-ounce bass.