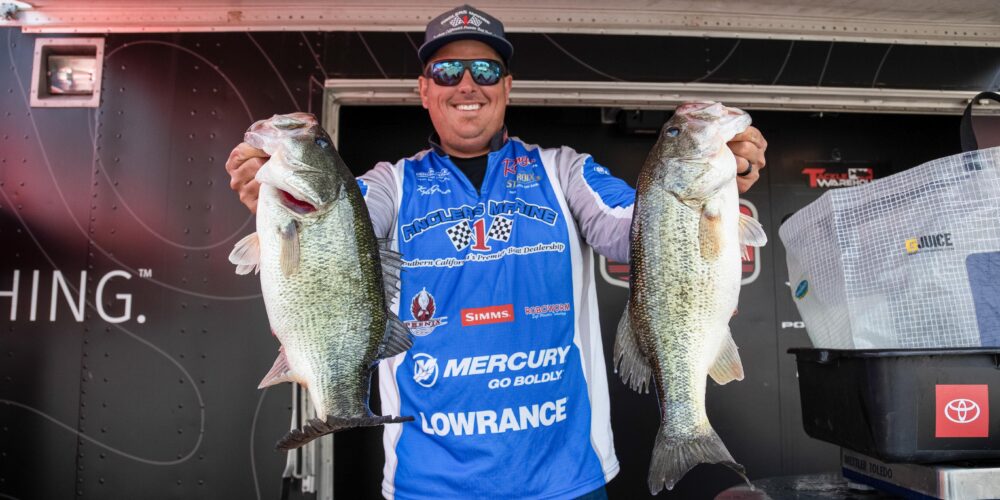 CLEARLAKE, Calif. – After two days of fishing, Clear Lake isn’t kicking out the mega bags it’s known for, which is why consistency has proven to be gold this week in the Toyota Series Presented by A.R.E. Western Division event. Posting back-to-back 19-pound limits, Kyle Grover slid up the leaderboard to claim a slim lead heading into Saturday’s final day. With just a 7-ounce lead over second, and just under 8 pounds separating him from 25th, Grover is going to have his work cut out for him on the big-fish factory if he wants to grab his second Toyota Series win.

“It was slower for sure, I still caught a lot of fish,” Grover said, “I caught probably 25 fish today. It’s a community hole or ‘community zone.’ There’s just a big wad of fish that lives there all year. It’s kind of where I’ve fished the last few years, they’re just kind of moving around. When you pull up on the right spot, it can happen.”

Grover is targeting offshore grass to catch staging fish, casting to them with both finesse and reaction baits. He noted that yesterday’s wind is having lasting effects on his fishing area.

“It was better in the wind yesterday, for sure,” he said. “The area that I was fishing, it kind of cleared up a little bit, the wind pushed the dirty water out of there. So, it cleared it up (and made it) a little tougher. I caught them a little bit deeper”

The Rancho Santa Margarita pro knew adjustments were necessary if he wanted to stay on the bite, and he made moves relatively early on Day 2.

“I want to say about 9:30 a.m., I moved out deeper to a good little spot and caught two 4-pounders on two casts,” Grover said. “And then I went to another little patch that I know they sit on and caught another 4-pounder, and that was the key.”

Grover adds that it’s not a matter of when he caught his fish, but rather where he found them that made a key difference for him on Day 2.

“I can catch them pretty good most of the day, it seems like it’s just slow and steady,” he said. “There’s been quite a few guys fishing around me the last two days. But I’ve really got the little spots where they’re sitting dialed in. Most of the guys are just blowing through the zone and I’ve got very pinpoint little spots.”

Grover is excited about his chances on the final day, but knows that a couple of big bites will be critical for him to hold the top spot and earn his second Toyota Series win.

“I mean, I know I can catch 13 pounds easy, it’s just can I get a couple … I haven’t caught one over a 5,” Grover said. “Generally, when you catch as many as I have in that spot, you catch a couple of big ones. So, it’s a consistent spot. Can I win? Sure. Will I? Who knows?”

Thursday’s wind gave way to sunny, post-frontal conditions Friday for the field of over 70 Strike King co-anglers fishing Day 2 on Clear Lake. Blaine Christiansen rocketed into the lead after smashing 21 pounds, 9 ounces to bring his two-day total to 36-7. George Fedor is second with 31-13, Duke Kanaya is third with 31-6.

“I feel pretty good. I do try to win when I come here, I know it’s pretty hard to do when you’re fishing out the back of a boat,” Christiansen said. “You’re not able to control everything, but I’m trying to beat everybody else.”

Christiansen locked a finesse worm in his hand on Day 2 after making note of the post-frontal conditions.

“I’m just fishing it super, super slow, just letting it drag, not moving it too much,” he said.

Christiansen’s previous experience and knowledge of the lake’s largemouth habits have paid off well: the San Jose-based angler recognized that the fish have been in a funk as they prepare to spawn, but haven’t had the perfect conditions to do so yet.

“You know the fish want to spawn, but this weather that’s been coming has just kind of been halting them,” Christiansen said. “They want to go to the bank, so they’re either close to the bank or they want to be at the bank.”

Christiansen knows his lead is relatively large, but he still feels less than comfortable holding the top spot as the field takes off on the final day.

“I usually don’t like being in the lead going into the last day, because guys are really gunning for you, so we’ll see how it goes,” he said. “I’m going to do everything I can to win.”