Consistency prevails to give Hall Day 2 lead on Guntersville 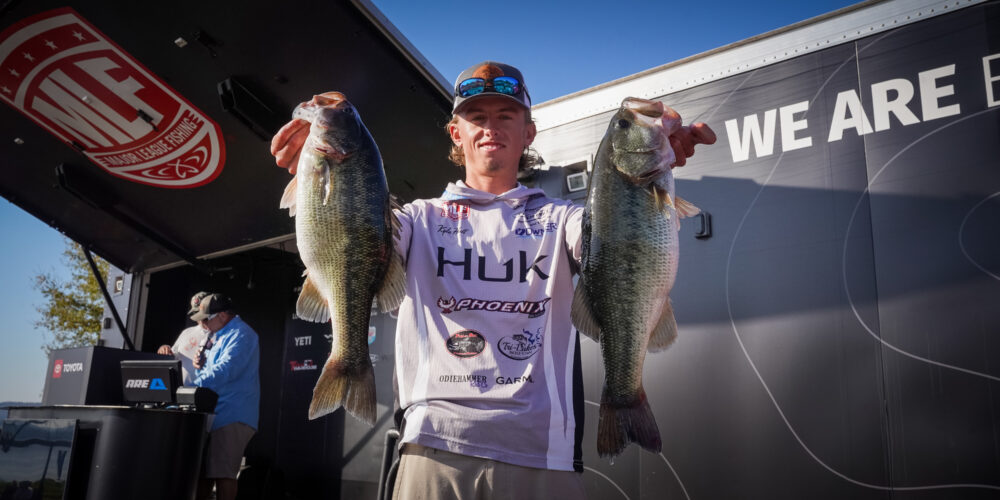 GUNTERSVILLE, Ala. – A field of 194 boats that began the Toyota Series Championship Presented by A.R.E. on Lake Guntersville on Thursday and Friday is now down to only 10. Leading those 10 remaining boats is Kyle Hall. The Texas pro filled another limit on Friday weighing 18 pounds, 9 ounces, giving him 38-9 for the tournament and a 5-ounce lead over Todd Castledine heading into the final day on Saturday.

Hall’s bite slowed with the current, but he still leads

A windy day on Guntersville definitely didn’t help any anglers out there, including Hall. While there were seven 20-pound bags brought to the scales on Day 1, there were no 20-pound bags on Friday. For some, weather and pressure were the major contributing factors. For Hall, it was all about the lack of current.

“It was a tougher day today for sure,” Hall said. “I caught about 40 fish yesterday and only about seven today. They were pulling current at the dam yesterday and that slowed down a lot today. I think that slowed me down a bit and it definitely hurt my bite.”

Hall remained consistent, even through his struggles; which is why he stands where he does on the leaderboard heading into the final day. Some anglers feel as though they can let their guard down once cuts happen and the field is trimmed to just 10 – but not Hall. He prefers to keep his bait, area and depth he’s fishing close to his chest; but he did provide a little insight to his tactics.

“Every fish I find, I feel like I use a different way to catch them,” Hall said. “Some of them want a constant retrieve, some of them want you to pause and some want you to jerk it like a jerkbait. I’m using one bait and it’s working, though. I’ll keep doing that tomorrow.”

Qualifying out of the Wild Card division, Hall is no stranger to the winner’s circle this year. He took home some hardware at Stop 6 of the Tackle Warehouse Pro Circuit on Lake Champlain. Hall knows what it takes to win, and he knows he’ll have to be at his best to pull it off against some stiff competition. However, he’s not lacking confidence in himself that he can do it.

“After practice, I knew I had a chance to win,” Hall said. “Getting them in the boat has been the struggle. I don’t care how many times I’ve won or how many big fish I’ve caught in my career, I want to win tomorrow.”

Just like on the pro side, there’s a new leader on the Strike King co-angler side in Jason Sandidge. The Arkansas angler caught his first limit of the week weighing 13-11, giving him 24-4 for the tournament and good enough for a 13-ounce lead over Jason Swanson.

Sandidge was tired when lugging his bag of spotted bass back to the release boat, but his spirits were high.

“We ran about 50 miles today and got out of flipping the grass,” Sandidge said. “My arms were so dead from flipping and throwing a frog that we moved to a spot with smallmouth and spots. I caught spots on an Alabama rig and had a limit in about 20 minutes of doing that. I had 11 keepers today in all, so it was a fantastic day.”

Sandidge was paired with pro Brent Anderson, who placed 20th. Sandidge now enters the final day with a shot to win the Toyota Series Championship for the second year in a row. He took home a third-place finish in 2021 on Pickwick Lake after entering the final day in fourth place.

He’ll obviously enter the final day with the top spot this year, but Sandidge isn’t looking forward to the pressure that comes with it.

“I don’t really like leading before the final day because it’s a lot of pressure,” Sandidge admitted. “I’m going to have to be versatile and be ready to go junk fishing. I’ll have to be ready to adapt with that rain that we have coming in.”

The Toyota Series Championship Presented by A.R.E. concludes Saturday on Lake Guntersville. The remaining Top 10 pros and Strike King co-anglers will try to make one final push for the top spot. Weigh-in will begin at 3 p.m. CT.