Harlin Keeps Rolling on Lake of the Ozarks 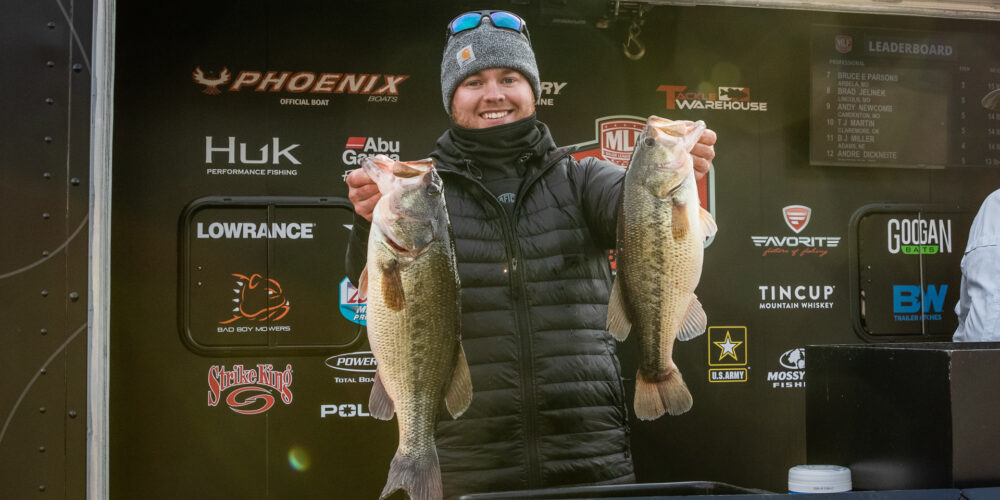 The weather changed today at the Toyota Series presented by A.R.E. Plains Division on Lake of the Ozarks, but the fishing remained tough for the anglers.

Sunny skies and generally pleasant conditions yesterday were replaced with more wind, overcast skies, and colder temperatures today. Even with much different weather conditions, the results were the same as many anglers struggled to catch fish, let alone secure a limit.

The exception to that is leader Michael Harlin of Sunrise Beach, Missouri, who remained consistent both days by catching more than 20 pounds on back-to-back days. On day two, Harlin put an even 20 pounds on the scale to boost his total to 41-11.

The Missouri angler has a commanding lead of more than 11 pounds over second-place angler Andy Newcomb, who sits at 30-7.

Harlin had to overcome some technical difficulties with his forward-facing sonar to start the day to reach his weight today.

“I’m doing the same thing as yesterday and relying on my Garmin Panoptix LiveScope to see the bass,” he says. “The ride this morning must have messed it up because it wasn’t working when I started fishing. It took me an hour and a half to get it fixed.”

Fishing down the lake and throwing an umbrella rig, Harlin managed two keepers early without the use of his electronics. Then the bite turned around when the sun decided to poke through the clouds and his electronics were working properly.

“I could see them down there, but they just wouldn’t bite,” says Harlin. “I knew they would eventually start biting and once the sun came out, they lit up.”

With a comfortable lead going into the final day, he’s in great shape for the win and feels good about his chances.

“I feel pretty good that I can catch them again where I’m fishing,” says Harlin. “I think I’ll be able to catch at least 12 pounds tomorrow.”

Wisconsin’s Casey Goode entered the day in second place with 12 pounds, 9 ounces. He only managed four today, but his 11-6 catch gives him a lead of 5-7 going into the final day.

Goode credits versatility for his success this week so far.

“I was throwing everything to catch them today,” he says. “I caught them on an A-rig, a spinnerbait, and a Reaction Innovations Sweet Beaver. Yesterday it was a Berkley Frittside crankbait and a split-shot rig with a green pumpkin Zoom worm.”

Another key to success, according to Goode, was having great partners.

“I had two great draws,” says Goode, who fished with pro Terry Blankenship today. “They each took me to the same area. I couldn’t believe it.”