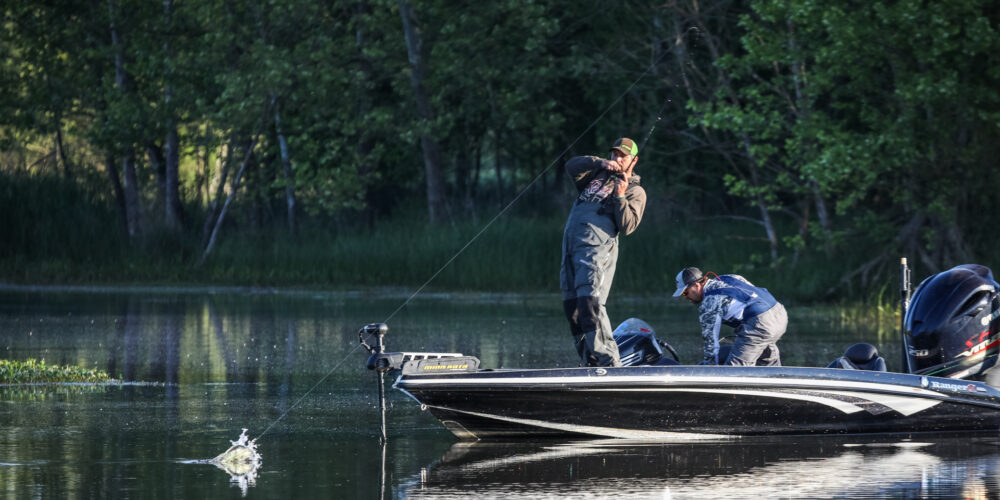 It’s haves and have nots out on Lake Dardanelle.

Day 2 of the Toyota Series Presented by A.R.E. Plains Division finale seems like a carbon copy of Day 1. The weather is gorgeous. The water is still chocolate milk and falling. And the fishing is still tough and getting tougher.

Many anglers we spoke with this morning said they were getting more bites than yesterday, but the bites were so “funny” that hook-ups were few and far between. The result was the overwhelming majority of the pros sitting on zero or one fish again.

Among those have-nots was BJ Miller. Unless something drastically changes, the fourth-place angler from yesterday won’t be fishing tomorrow, as we found him late in the morning with zero fish. Then again, he said he’d probably have to switch since he figured the dropping water had all but killed his flipping bite.

Of course, that shallow bite was definitely hurting a number of anglers today, especially those keying on wood like Miller. The grass bite is hit or miss, but the rock seems like it’s becoming more of a player after burning anglers yesterday.

Yet, amongst the struggles, there still were some “haves” out there that should make weigh-in quite interesting.

Leading after Day 1, Chip Hawkins had five for about 10 pounds late in the morning. We saw Zach King catch a pair of 3-pounders right off the bat in a tiny backwater, and last word is he’s culling around the 14-pound mark. That will definitely put him in contention to take over the lead.

Of the top anglers, the only other one our on-the-water crew found was Theron Caldwell, who was having a bit of a good-bad-ugly situation. He only had three fish he’d caught cranking (the bad), but those three weighed over 12 pounds, with one 5-pounder (good). The ugly part is we found him stranded at a boat ramp waiting for someone to bring him a new prop, as he threw an ear off his. With clouds rolling in, he was chomping at the bit to get back out, figuring the cranking bite would only get better. If he gets rolling and catches even one more fish he could be in contention to crack the top five. And two more big keepers will have him in contention for the lead.

Throw in the fact that Andy Newcomb could potentially lock down the Angler of the Year title AND make his third top 10 of the season, and there should be plenty to watch come 2:30 p.m. CT.