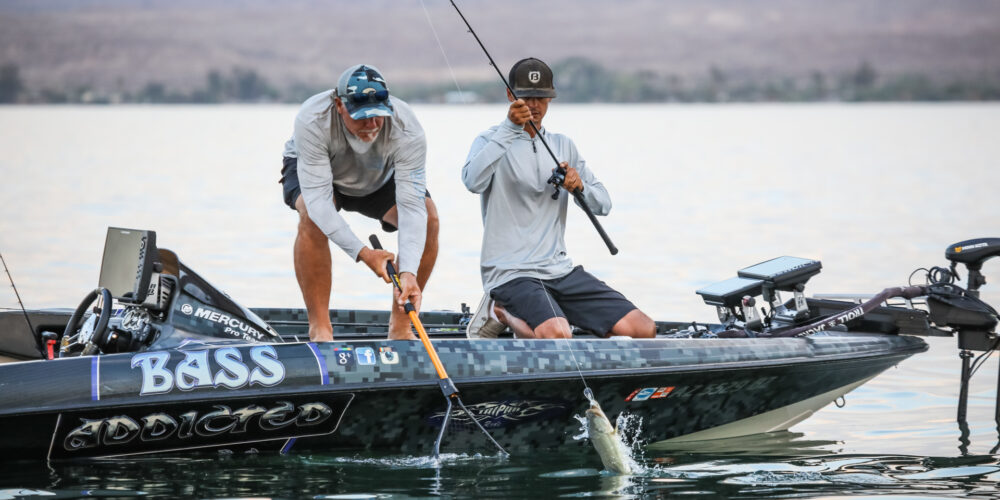 It’s haves and have nots out on Lake Havasu, and it seems the haves are few and far between.

Day 2 of the Toyota Series Presented by A.R.E. Western Division finale seems like a carbon copy of Day 1 at first glance, but things are definitely a bit different. There’s a bit of humidity in the air that is making the heat feel worse, and the water seems to have come up about a foot.

Of course, the welcome difference for leader Mike Williams is he was catching fish from the start. Yesterday, he didn’t get a bite for the first three hours. Today, his first was in the box before 7 a.m., and even though it was only a 2-pounder he joked he “wasn’t mad about it.” He was mad about losing a kicker bite later in the morning, but when we checked on him as our crew was getting off the water he had a limit for 14 pounds or so and had just started catching them again after a bit of a lull. So it seems about guaranteed he’ll be fishing tomorrow.

He wasn’t the only top pro who got off to a fast start today, as the two guys right behind Williams, Andrew Loberg and Roy Hawk, also tore them up quick.

Loberg had a 12-pound limit cranking a 300-yard stretch, seemingly getting bit every time he hit a certain sweet spot. And that limit had only increased to 16 pounds or so, with his only complaint being they were all cookie cutters, which our crew can attest, as we watched him balance beam them all to try and cull and they were all almost identical.

Hawk, however, got himself a kicker right off the bat with a 4-plus-pounder. Fishing close to takeoff, he cranked up a pair of fish to start and was going to leave when he tossed a worm out and got the bigger bite. No surprise, he opted to stay a bit longer after that. While our crew left him early, it’s a safe bet by his start he’ll be a contender at the top again come weigh-in.

Yet, that was about it for the haves this morning.

In fourth place after Day 1, Randy McAbee Jr. only had two fish for 3 pounds when we checked on him late in the morning. Eighth-place’s Robert Nakatomi didn’t have a fish, though he’d lost a pair of good ones. And ninth-place’s Tai Au had just one 2 ½-pounder.

Basically, everyone outside of the top three pros was driving the struggle bus this morning, with the overwhelming majority of the pros our crew spoke with sitting on zero or one fish.

That includes Phillip Dutra. He had one 2-pounder when we found him, and he’ll have to find some friends to join it if he wants to lock down the Angler of the Year title. If he can’t, that will certainly add some intrigue to weigh-in starting 2:30 p.m. MT.