Lake of the Ozarks Dishing Out Unprecedented Toyota Series Conditions 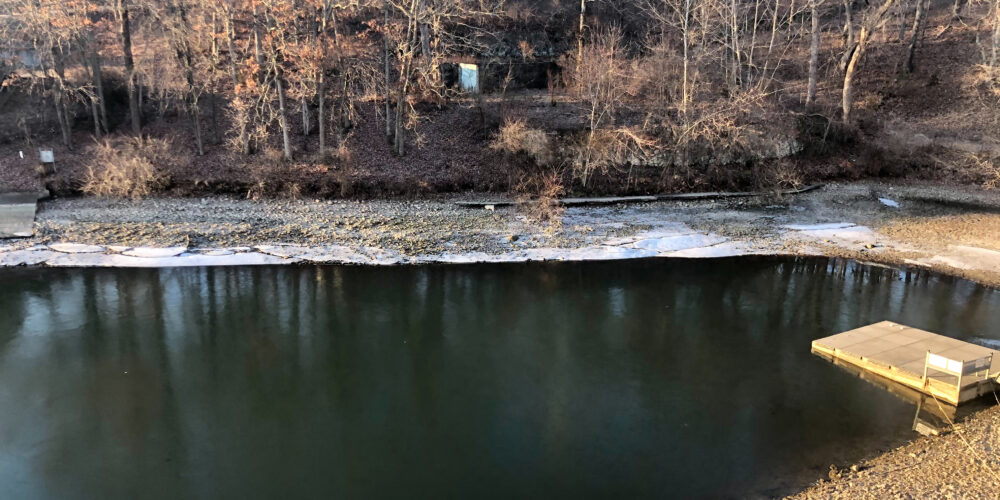 Lake of the Ozarks still has ice in some places due to the recent cold snap. Photo by Todd Hollowell.
March 2, 2021 • Jody White • Toyota Series

The recent cold snap that sent Texas into a full-scale emergency and locked up Grand Lake in ice also brought shockingly cold weather to Lake of the Ozarks, which is the site of this week’s Toyota Series presented by A.R.E. Plains Division kickoff. The event is presented by Fenwick and hosted by the Tri-County Lodging Association.

A typical spring event on Lake of the Ozarks is a big bass guarantee, with spinnerbaits and other power techniques putting lots of bass in the boat. This time, however, the ice cover is still in the process of completely thawing. Highs are predicted to be in the 50s and 60s the rest of the week, so anglers will be relatively comfortable, but the fish may not be.

Tackle Warehouse Pro Circuit pro Casey Scanlon guides on Lake of the Ozarks, and he can’t recall ever fishing a tournament under these conditions.

“It’s shaping up to be a lot tougher than we reported earlier,” Scanlon says, who had his sights set on a banger of a tournament. “I don’t know that I’ve seen it like this and fished a tournament directly after. We’ve got some decent weather, nothing that’s going to bring the water temps up real fast, but we’ve got some sun in the forecast. Right now, the fishing is tough, and the water temp is really cold, like 36 degrees in places.”

Now, plenty of big bags can still be caught with water temps in the upper 30s and low 40s. In some parts of the country, low water temperatures actually provide some of the best fishing of the year. Still, it’s extraordinary considering the lake and the timeframe.

“This morning the main lake had a thin sheet of ice over it, for miles,” Scanlon says. “That’s nothing hazardous, but there’s definitely still ice in the back of a lot of coves. It’s a huge lake, and I haven’t seen all of it the last couple days, so there might be sections that are still completely frozen, but the lower end has a lot of fishable water.”

On the technique side of things, Scanlon is hoping things turn toward a shallow bite as the week wears on. Still, he’s not really planning on it.

“I think it’s going to be more jerkbait, jig, and Alabama rig – traditional Ozark stuff, real cold-water techniques,” Scanlon says. “You might see some other stuff that we don’t normally throw down here work, just because it is so cold. Guys might take a more finesse approach and catch some fish that way.”

Whatever happens, it’s going to be a sight to see. Pros have posted more floating ice chips than bass to their Instagram Stories this week, so we’re almost certainly going to learn some new things about a well-trodden lake.

“Normally limits are fairly easy to come by here in March, but I think this is going to be a different tournament,” Scanlon says. “I think if a guy comes in with a limit a couple days in a row he’s going to be in pretty good shape. But, I’ve got my fingers crossed it’s going to progress and get better as the tournament goes on.”