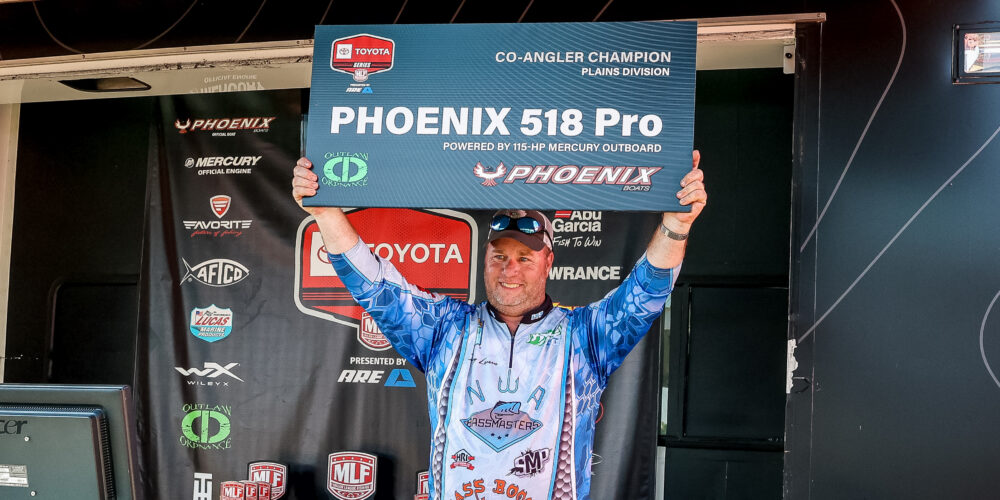 WARSAW, Mo. – Arkansas native Dewey Larson was able to hang on to his Day 2 lead, totaling up 23 pounds, 8 ounces for the Strike King co-angler win at the Toyota Series Presented by A.R.E. event at Truman Lake. Will Lancett came in second, connecting on an 18-1 three-day total. Tate Brumnett brought home the bronze, with a respectable 16 pounds.

Overcoming several obstacles this week, champion Dewey Larson has been on a roller-coaster of emotions since Day 1.

“The pro I was paired with on Day 1 had his borrowed boat break down right when we put it in the water, and we ended up fishing the entire day using only the trolling motor,” Larson said. “When I called my Day 2 partner, he didn’t know what was going to happen because his boat had also broke down during the first day. Mark McWha, the tournament director, worked his magic and somehow I got in with someone else and the rest is history.”

Bound to his boater’s strategy and location on the lake, Larson capitalized on slow-moving baits on Day 1 and 2, flipping soft plastics to standing timber. He was forced to adapt on Day 3, as his pro was doing something completely different.

“We were fishing shallow brush and they weren’t eating on the bottom. A lot of it was LiveScoping, which is hard to do from the back of the boat,” Larson said. “I threw a Hail Mary and cast a Whopper Plopper out there across it. Two of them just annihilated it and my pro angler was like ‘what just happened?!’”

His bold strategy paid off, landing him four for 9-10 on Day 3 and his first Toyota Series Strike King Co-angler win. He also earned bragging rights and a brand new Phoenix 518 Pro, complete with a 115-horsepower Mercury outboard.

“I’m emotional,” Larson said. “I’ve had several close calls here at Truman and I always figured I’d get a win. I didn’t know it would be this week, but I just had that funny feeling.”