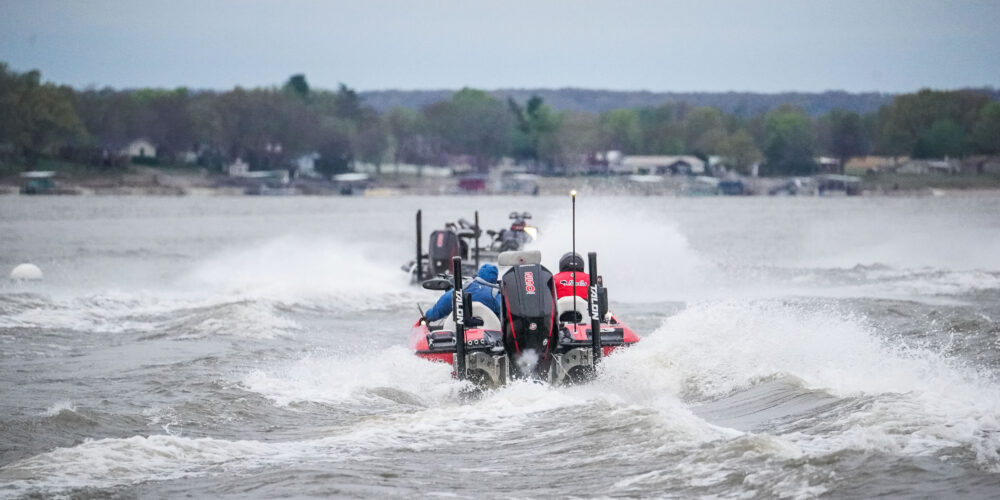 With the calendar freshly flipped to April, Grand Lake is looking springy as ever, which is a welcome sight to the field for the Toyota Series Presented by A.R.E. Plains Division. After a frigid season opener on Lake of the Ozarks over a month ago, warm weather and blooming plants will set the stage this week as many of the bass in Grand are making their annual push towards the bank to spawn. Because of that, the fishing should be stellar in the second stop of the year – Presented by Fenwick – and Grand will finally get a chance this year to showcase the caliber of fish that call it home.

Though technically in the Ozarks, the Grand Lake is a bit of a combo between a prairie lake and a true Ozark impoundment. It’s flatter and shallower than Beaver Lake and Table Rock, but you can still mistake large sections of it for the Ozarks very easily. The impoundment was created in 1940 when the Pensacola Dam was finished. The 46,500-acre reservoir is the largest impoundment on the Neosho River (which is also called the Grand River, particularly below Grand Lake), and the lake is a bit more than an hour or so from Tulsa.

The predominant structure on the lake is rock. Aside from various types of rock, docks and wood found in the form of flooded bushes, laydowns and brushpiles are found fairly commonly throughout the lake.

The split nature of the lake is shared by its tributaries to an extent. Flowing from Kansas in the north, the Neosho River is the primary tributary. Meeting up with it near the top of the lake, the Spring River also flows from Kansas and the western edge of Missouri. The part of the lake fed primarily by the Neosho is notably dirtier, and the upper reaches of it feature a lot of permanently shallow water strewn with laydowns. Entering the lake to the north of Sailboat Bridge, the Elk River is the clearest-running large tributary of Grand and flows from the east out of the Missouri Ozarks.

Currently, the lake sits just under full pool thanks to recent heavy rains in the region. Those same rains have also made the lake more stained throughout it than usual, which isn’t necessarily a bad thing, especially with waves of fish sliding up on the bank.

“The fish are pulling up right now,” Collings says. “I don’t think we’ll see anyone sight fishing, it’s just too dang dirty, but you can fish where they should be spawning and catch them. The only bad thing is that GRDA is pulling the lake down, so that’s kind of jacking with things. But, the fish are wanting to spawn, it’s that time of the year and I don’t think all of the fish are pulling off the bank. You can still go down the bank and catch 4- to 6-pounders.”

Grand has a reputation for having a staggering number of 3- to 5-pounders in it, but Collings brings up a good point in that bites over 5 pounds can be harder to come by and are often the difference maker between a good day and a great day. Even with numbers of fish up shallow and willing to bite, Collings says there’s still a bit of luck – or timing – that will come into play this week.

“You can catch a ton of fish right now just going down the bank,” he adds. “There’s a lot of males up, but the problem is getting a big bite. Grand has a ton of docks on it and it’s no secret these fish spawn behind the docks. You can fish 100 docks in a day and catch one 5-pounder, then go to the next dock and catch a 6. The guy who can get two big bites every day of the tournament is going to win. It’s just getting lucky and pulling up on a stretch they pulled up on overnight.”

As far as major tournaments go, Grand has a reputation for certain parts of the lake firing better than others during an event. While that may hold true this week, Collings believes the lake may be fishing better from the rivers to the dam than normal.

“A week ago, I would have told you a one-mile section of the lake would be the best part of the lake,” Collings says. “But after fishing three days and sampling the entire lake there wasn’t one part of the lake that was better than the other, I think. If you go down the lake, you catch a lot more fish. You could catch a ton of 13- to 15-inchers down the lake and then run into a 4-pounder. Mid-lake to up the rivers you aren’t catching 50 fish a day like you would down the lake. You’re going to catch 10 or so, but they’re more quality bites.”

Certainly, there will be some variation, but springtime on Grand means you should have two things tied on – a jig and a spinnerbait.

“The best way to catch them right now is going down behind docks throwing a spinnerbait and a jig,” Collings says. “That’s pretty much going to be the two main deals this week in my opinion. You’ll see some guys [using forward-facing sonar] but I don’t think it’ll be won like that. It’ll just be a normal Oklahoma tournament of throwing a spinnerbait and flipping a jig around.”

All things considered, this event should be won with 60 pounds or better, at least according to Collings.

“We’re going to see a lot of big bags in this event,” says Collings. “There’s a good possibility we see a mid-20s bag at some point this week. But I think it’ll take 20 a day to win.

“The only issue is that these fish get pressured and this time of the year these fish get smart, so guys are going to have to figure something else out to catch them come the third day.”

Even with weights on the top end projected to be solid, Collings says you should see good things down the leaderboard, too.

“There’s a lot of 4-pounders biting right now, so we’ll see plenty of 17- to 20-pound bags in this deal,” he adds. “There’s going to be some locals that catch them really good, but then there’s going to be some out-of-town guy who busts a 25-pound bag going down one stretch throwing a spinnerbait. That’s just how Grand is right now. It’s April, it’s Grand and the fish are doing a bunch of stuff right now and guys are going to catch them.”