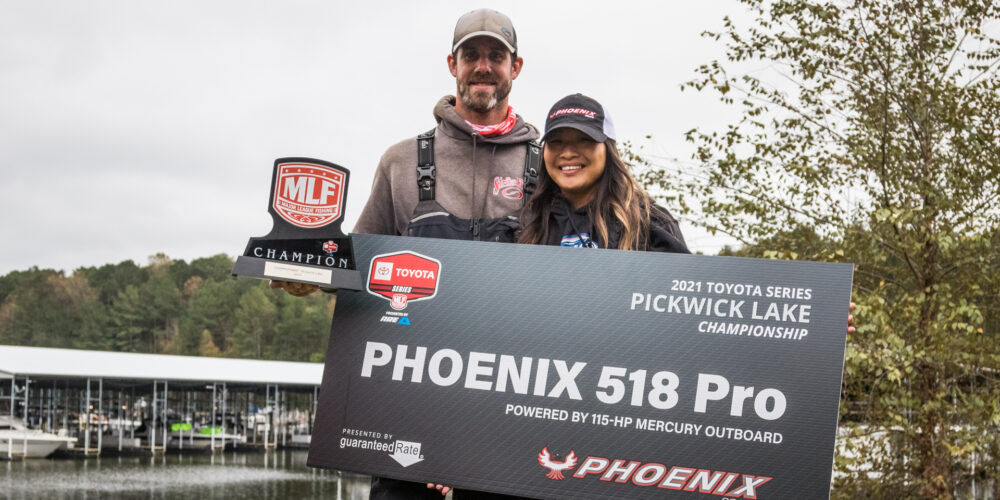 COUNCE, Tenn. – Fishing from the back of the boat in the Toyota Series Championship Presented by Guaranteed Rate on Pickwick Lake wasn’t easy. None of the Top 10 Strike King co-anglers weighed a limit all three days of the event, which meant making every fish count was a necessity. Scott Parsons did just that tallying 12 bass weighing 35 pounds, 8 ounces over three days to claim the top spot and new Phoenix 518 Pro bass boat.

Parsons, who works at Walmart’s home office in Rogers, Arkansas, spends plenty of time honing his skills on Ozark fisheries, but fall on the Tennessee River is a relatively new concept. That being said, it’s not his first rodeo on the famed river system and he’s happy to get a little redemption.

“I came close (to winning the Toyota Series Championship) in 2018 on Guntersville,” says Parsons. “I came about a pound shy of winning that one and had the fish on to win it, but this is definitely something I couldn’t even dream of to have this trophy in my hand.

“I’ve never been to Pickwick before, but my buddy, Jason Sandidge, lived here 30 years ago and hasn’t fished it since. He clued me in a little bit on what to do and we drove up here together open-mined. I don’t normally fish grass, but I fished Sam Rayburn back in the spring and it kind of clued me in to how to fish it and what to do. I just threw a spinnerbait and a ChatterBait all day long.”

A 3/8- or ½-ounce War Eagle spinnerbait (blue herring color) was the most universal tool Parsons had at his disposal this week. While the 3/8 did the job earlier in the week, the 1/2 ounce was the ticket on the final day for fishing behind Chris Digino in the wind.

“I just couldn’t cast that 3/8-ounce spinnerbait today,” he says. “I switched to the ½-ounce and it made the difference. I was able to keep control of it and get it down in the grass and feel what I was hitting.

Weighing just three fish today, Parsons weighed 12-12, with one of them being close to 6 pounds and it was certainly the difference between him winning or bringing home another runner-up title.

“When I caught that big one, it was my last keeper, I thought I had a chance to do this,” he says.

Parsons is pumped for the win and the new boat, but he also knows he wouldn’t be here if it wasn’t for what his home pond of Beaver Lake has taught him.

“Beaver Lake isn’t my favorite lake,” says the 36-year-old co-angler. “But some people say that if you can fish Beaver, you can fish anywhere. That has played in some of my career in learning how to fish a drop-shot, shaky head and a spinnerbait. It’s helped me out throughout the years.”