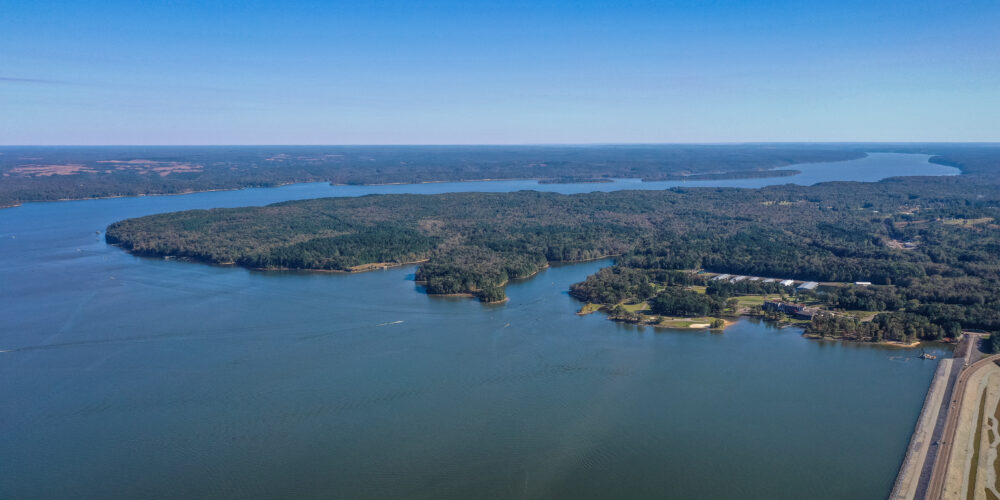 The last big tournament of the year, the Toyota Series Championship is presented by Guaranteed Rate and headed back to the Tennessee River. Taking out of Counce, Tennessee, on Pickwick Lake, this year’s playing field includes a lot of water, with the opportunity for anglers to lock up and down and even run to other connected bodies of water. Given the big field of the best from the triple-A ranks, it should be a fitting season finale and with up to $235,000 on the line, it’s sure to be hard-fought.

This year’s Toyota Series Championship playing field is somewhat unique, as major tournaments out of Counce, Tennessee, as opposed to Florence, Alabama, on Pickwick are still a bit new. Because of that, it gives anglers an unfamiliar dynamic – locking up to Wilson is in play, but it’s about a 48-mile run from takeoff. To get to the tailrace at the Wheeler Dam, it’s another 14 miles or so, which isn’t much when you’re taking off from Florence, but pretty significant when you’re running the whole length of Pickwick to get there.

Additionally, anglers can also go downriver and head to the tailrace of the Pickwick Dam or the upper end of Kentucky Lake. Though they’re only allowed to run to New Johnsonville, the best fishing is likely to be right around takeoff, albeit through a lock and on the Tennessee River proper.

Finally, some may be lured in by the history of Bay Springs Lake. Mark Rose won the 2009 Stren Series Championship there and it’s about 38 miles from takeoff down the Tennessee Tombigbee Waterway which is an easy run. With grass, some big largemouth and good spotted bass, it’s an interesting option that produced at least one good check this spring in the Bassmaster Open on Pickwick.

Fingers Crossed for the Arrival of Fall

While the water temperature last week on Pickwick was in the upper 70s and low 80s, some recent nights in the 50s have the temperature coming down, and the fish could be coming around to a fall bite by the time the tournament rolls around.

“It’s going to be a good tournament, the weather is setting up to where we’re getting some cool nights and some cooler days,” says Pickwick expert Justin Atkins. “That ought to push some fish into their fall transitions where they’re grouping up and guys can find areas that are going to be productive instead of just one fish here and one fish there.

“We’ve had some high water lately, but I’m sure there’s some grass, and that’s always going to be a factor on the Tennessee River. Then, guys throwing topwater on bars and stumps, that’ll come into play too. I don’t know how much deep fishing will come into play. I’ve seen it where you still have some fish out deep late in the year, but normally those are not the ones to win.”

Rose agrees that by tournament time the full-on summer bite should be over.

“I think it’s going to be a whole lot like that Stren Championship I did good in,” Rose says, who has three wins on Pickwick. “I think it’ll be a lot like those conditions, but with a little more grass. I foresee it to be a typical fall tournament, with the lake starting to draw down, and the shad starting to move back into the creeks and shallow, and you’ll see a lot of that fall transition push. A lot of topwater fish, and all the shad stuff.

Between the tailrace below the Pickwick Dam, plus the Wilson Dam and the legendary Wheeler Dam, there’s plenty of moving water for anglers to sample. Atkins in particular thinks it could go down at one of them.

“Truthfully, with these guys being able to lock, and three tailraces coming into play, I just don’t see how it can’t get won at one of those,” Atkins says. “It’s that time of year where smallmouth start showing back up, and with three of them coming into play, your odds of one of them being on fire are pretty good.

“If it ends up getting won in a tailrace, a guy could potentially weigh-in all three species – spots, largemouth and smallmouth,” he adds. “I think the winning tailrace fish are going to be predominantly smallmouth, but you will have big largemouth and they’ve been catching some really nice spots for the last year or two.”

The most recent Toyota Series Championship events on the Tennessee River have been won by the book to a large degree. In 2018, Kyle Walters punched matted grass for the win on Lake Guntersville. In 2017, Bradford Beavers knocked out the win fishing shallow bars on the south end of Kentucky Lake. Both wins relied on common patterns with years of history behind them that the majority of the field was keyed in on to a degree. This time, some of the lower percentage plays could show out.

“You saw in 2009 that Keith Pace and Jonathan Newton got on a pretty good bite in Wilson,” Rose says. “I think going to Wilson, or something off the beaten path could be good. The majority of people will be in Pickwick doing the same old thing, the guy that travels a long way and figures out that X-factor, he could be the guy that makes a big difference.”

As for Bay Springs, Rose doesn’t think it’s going to be a huge player.

“I don’t fish Bay Springs a whole lot,” he says. “I got tipped off to a bite that was going on down there in 2009, and I went down there and figured the deal out and got on something I normally don’t do. That was kinda a fluke deal for me, the guy who told me about it, he doesn’t foresee that happening again this time, however, I’ve gotta go down there and try it. But, if it’s like he says, I will be on Pickwick, just because of the hours I have logged in on that lake.”

On the other hand, Atkins thinks there’s something to be said about prospecting in Bay Springs.

“Bay Springs could potentially be a player,” says Atkins. “It’s got grass in it, it’s got big spots, and big largemouth too. The biggest largemouth I caught out of that system came from down there, I caught a 9-4 in a BFL down there one time. If somebody was to go down there and figure out how to catch those better size fish, you could see a Top 10 come from there. And it’s been a while since anybody has done good down there, so I feel like its’ almost due for it to happen again.”

With so many factors in play from a location standpoint, plus falling water temperatures and levels getting the smallmouth more activated, it’s sure to be a good event.

“I think 52 pounds will be really close for a win,” Atkins says. “The [Mississippi Division] Super Tournament got won with almost 40 for two days, but doing it three days in a row, with 200 boats and a cut, I don’t know. It may have potential to be north of 52, but if I was fishin’ it and someone told me I could have 52, I would take it.”

Another Pickwick local, Tackle Warehouse Pro Circuit pro Jimmy Washam figures on 19 pounds per day to win, which adds up to a stout 57-pound total.

However it shakes out, the Toyota Series Championship is always a great way to finish the season, and it can be life-changing for the winner, with a long list of pros like Zack Birge, Beavers and Ray Hanselman who used it as a career springboard.

“I really hate I’m missing it – I wish it would have lined up to where I could have fished enough Toyotas to qualify,” says Atkins of the Championship. “It’s always been a good one, but it gets bigger and bigger, and I think it’s the ultimate tournament for a triple-A guy to try to qualify for, I think it’s a really big deal.”