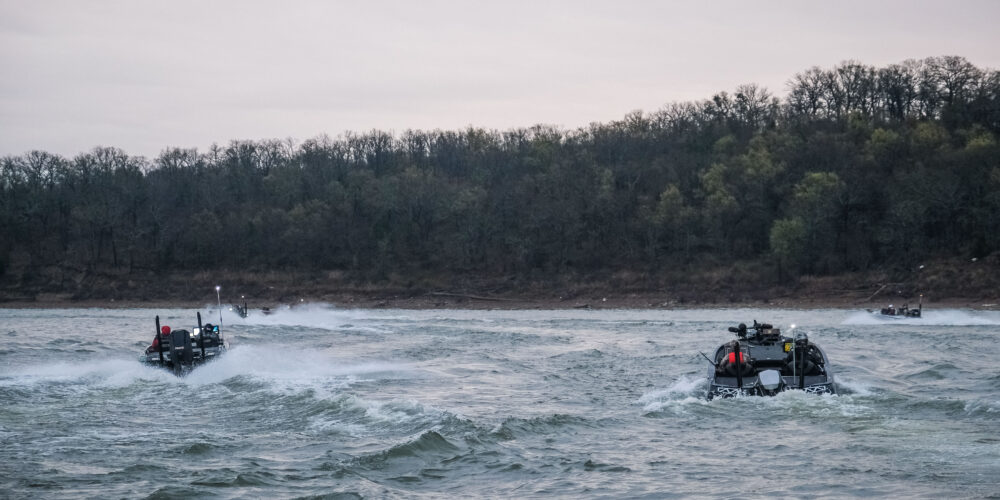 Mid-March and prespawn patterns usually mean good things on a fishery, however that may not be the case this week in the Toyota Series presented by A.R.E. Southwestern Division event on Lake Texoma. The event, which is presented by Abu Garcia and hosted by Discover Durant, will still showcase some of the big smallmouth and largemouth that call the impoundment home, though the lake may not be firing on all cylinders quite yet.

Still, 155 pros and Strike King co-anglers will be competing for the top spot over the next three days, with the winning pro competing for a prize of $40,000, plus an additional $35,000 bonus if the winner is a qualified Phoenix Boat owner.

Fed by the Red River on the state line of Oklahoma and Texas, Lake Texoma offers more than 89,000 acres to fish with great numbers of largemouth, smallmouth and spotted bass to catch. Formed by the Denison Dam, the reservoir stretches west along the Red River and north up the Washita River. One of the nation’s larger reservoirs, Texoma offers a diverse mix of points, bluffs, riprap, docks, shallow wood and shoreline vegetation. Generally, anglers will find the deeper, clearer water down by the dam, while the upper reaches tend to present more color.

Given the fact that it’s the end of March, Texoma is usually a much different lake, but thanks to the major cold snap that blanketed the region this winter, the lake is still a little behind.

Tackle Warehouse Pro Circuit pro Jim Tutt has won on Texoma before during this timeframe, and has fished it plenty throughout his career, but says things aren’t perfect on the lake just yet.

“I love this lake,” Tutt says. “It’s one of my favorite places to fish. The year I won here, I was catching them sight fishing, but we are far from that right now.

“I practiced for a few days and it’s been tough. The water temperature a few days ago was still 50 and it hasn’t changed much.”

Local hammer and winner of the 2017 Series event on Texoma Jeff Reynolds agrees the lake is a little cool and fishing is off, but also believes that things could improve as the weather warms throughout the event.

“The main lake temperature is still about 52 degrees but some of the creeks are starting to warm up a bit and I’ve seen water up to 65 degrees back in the creeks,” Reynolds says. “The fish seem to be changing every day – it’s getting to be that time of year where they want to move shallow, so this should be a fun event.”

Despite the full moon happening this Sunday, don’t expect a huge flood of fish to the bank to start spawning. Sure, it may help draw fish towards the bank, but more than anything, it could help bring consistency to what has been an inconsistent bite.

“The lake is full of fish and you should be able to pull up to every secondary point or windy point and catch them,” says Tutt. “But that’s not the case. They’re not biting. The shad don’t seem to be up, which is probably one reason why. The wind has also been blowing a different direction every day of practice and will do the same thing during the tournament, which makes it tough to get a pattern figured out or set fish up on the same stuff for multiple days.”

With as much hard cover as there is to fish in Texoma a jig can be hard to beat. Going along those lines, a spinnerbait and a squarebill crankbait will also see some action this week along the shallow rocks, wood and some docks.

Forward-facing sonar has played a role in several tournaments already this year and it’ll likely have some say in this one, too. Jerkbaits, umbrella rigs and swimbaits could be the keys to making offshore fish bite – or putting kickers in the boat.

Of course, the finesse factor is also important. Dragging a shaky head or drop-shot around may not be the fanciest way to catch fish, but if things are tough, it’s hard to argue with results.

Several anglers have echoed Tutt in how stingy Texoma is being at the moment and because of it the majority agree that covering water is the best way to get bit.

“The most bites I got during practice was four. But when you catch one it’s 3 pounds or better. So, I feel like there will be several people who make the Top 10 without catching 10 fish.”

Early rumbles indicate that somewhere between 40 and 45 pounds will win the event. Given the pre-tournament talks, that could absolutely be the case. But, this is Texoma in March. There are 20- to 25-pound bags of largemouth and smallmouth roaming these waters and come 3:30 p.m. CT this afternoon, we’ll see how feast or famine things really are on this pond.