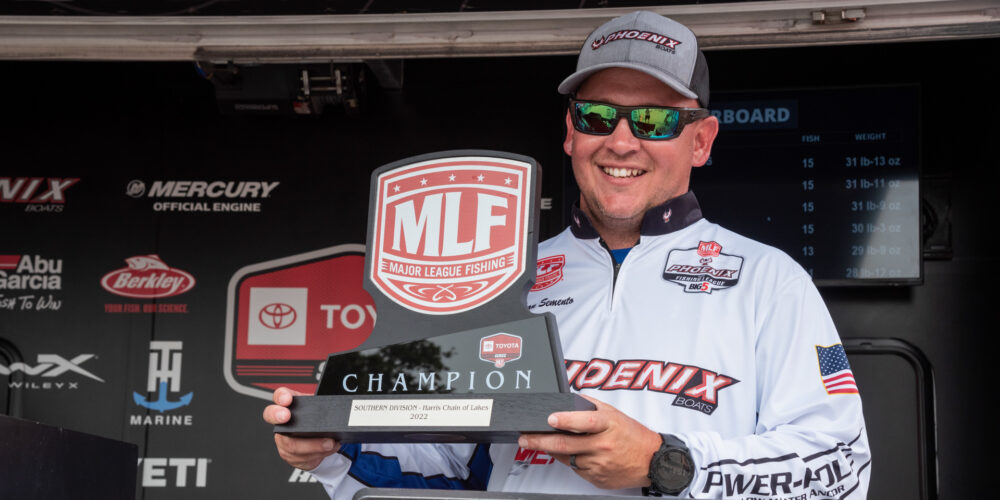 LEESBURG, Fla. – During practice for the Toyota Series Presented by A.R.E. Southern Division event on the Harris Chain, word spread like wildfire that Lake Griffin was the lake to avoid. Hydrilla spraying, algae blooms and rising water temperatures had turned the water color into a hue that resembled pea soup. Some who spent time there quickly changed lakes after just a few hours of practice.

And the more the word of Griffin’s unpleasant appearance spread, the bigger the grin grew on Jonathan Semento’s face. Semento, who lives in nearby Okahumpka, knew better than to buy into such dock talk. Just a couple of weeks prior, Semento placed second in a local event by catching 24 pounds out of Lake Griffin. His mind was already made up that Griffin would be his horse for the Toyota Series this week. When he locked through the first morning, he was stunned to see that only some 10 to 15 boats were going to Griffin – all was going according to plan.

But after Day 1, Semento brought a paltry 9 pounds, 15 ounces to the scale, leaving him in a dismal 119th place. The spot that produced his big catch weeks before was barren. At that point, Semento had a choice to make for Day 2: bail on Griffin and run to another lake to try to save face or be stubborn and go back to Griffin for another dose.

For Semento, there really was no choice: his Griffin conviction ran too deep. He knew what lived there and he was determined to find the fish that had ghosted him.

One Day 2, Semento returned to Griffin for redemption – and he found it in the form of the biggest limit of the even to that point: 24 pounds, 15 ounces. That catch vaulted him from 119th to 7th. But he was not finished proving to himself that he was right. Today, Semento returned to his Griffin mission and again caught the biggest limit of the tournament, this time weighing in 25 pounds, 3 ounces, which included a 9-pounder. With that, Semento sealed his first Toyota Series win with a three-day total of 60 pounds, 1 ounce. For his win, he pocketed $80,500, which included the Phoenix MLF Bonus.

“It feels great to come back from so far and win like this,” Semento said. “I was pretty frustrated that first day. But I knew those big fish were offshore and I just needed to relocate them. On the second day, I moved around a lot more and found them about 200 yards from where I caught them two weeks ago.

“What made it possible to relocate them was the fact that I had the whole lake to myself,” he added. “If 80 boats went over there every day, I wouldn’t have been able to hop around and fish as freely. Having no pressure over there was definitely a big key.”

The key spot the fish had moved to was a 100-yard stretch of clumpy eelgrass in 4 to 6 feet of water. The grass was healthy and green and full of bream, as evidenced by the number of bluegill his bass spit up in the livewell.

To do his work, Semento utilized two ChatterBaits: one was a 3/8-ounce golden shiner color for shallower 4-foot clumps and the other was a ½-ounce chartreuse and white model for deeper clumps in 6 feet. He trailed both with Yamamoto Zako trailers in matching colors to the ChatterBaits. He fished both on 15-pound-test P-Line.

“Sometimes with tournament fishing, it just comes down to being stubborn enough until it pays off,” he said. “Some people might think I was crazy to go right back over to Griffin after catching 9 pounds there the first day. But this fishing game can get personal, and it comes down to knowing you are doing the right thing even when your weigh-in ticket doesn’t reflect it the first day. I knew in my heart what lived there and I was determined to prove it.”