Thompkins Bags 31-6 to Lead at the Harris Chain 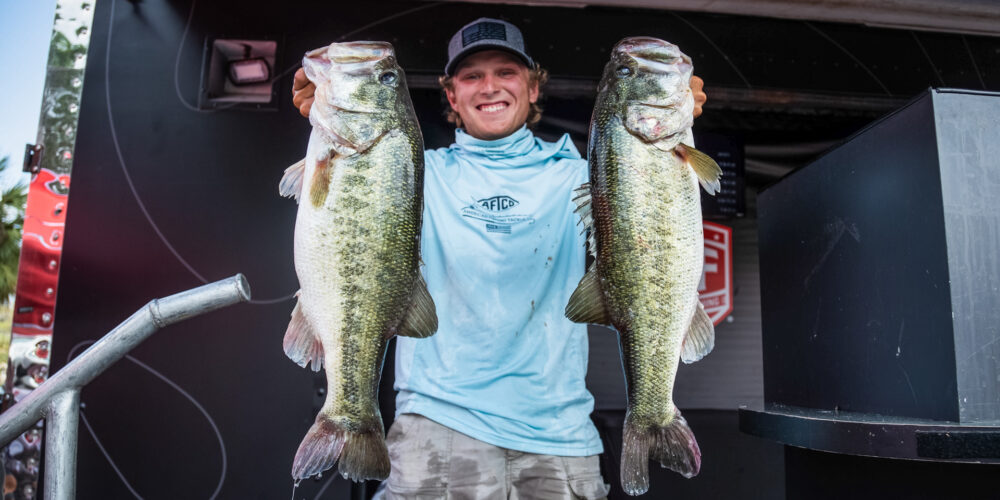 Jordan Thompkins of Myrtle Beach, S.C., has a score to settle with the Harris Chain of Lakes. At just 19-years-old, Thompkins fished the Bassmaster Open on Harris several weeks ago. In that event, he finished “in about dead last.”

That finish did not set well with Tompkins. So he decided to put his time in at the Harris Chain and seek some redemption for the poor start to his pro fishing career.

And it didn’t take long for Thompkins to right the ship in a big way.

Today he took a commanding lead in the Toyota Series presented by A.R.E. Southern Division event, dropping a massive 31 pounds, 6 ounces into the scale.

“I don’t like to lose,” says Thompkins, who is the son of former FLW Tour pro Timmy Thompkins. “I decided to stay here for a couple of weeks and fish all these lakes to learn as much as I could about them before the Toyota Series.”

Certainly his homework paid off, not only in finding fish, but also in employing strategy on the Harris Chain.

“I knew I was on some big ones, but I didn’t want to go to them right away,” he says. “If they didn’t bite right away, I didn’t want to get discouraged too early. So went to a spot where I could catch a quick limit with a jerkbait. Once I got to about 10 pounds, I knew I could move offshore, settle down and fish them right without getting in too big of a hurry.”

When he arrived at the big fish spot, it didn’t take him long to sack up his monstrous bag, which included two 8-pounders, and cull his starter limit.

“I’m cranking a few hard spots that I found in practice,” he says. “Which is crazy because I’ve never really even fished a crankbait very much. These are postspawn fish feeding up on shad and bream.”

Thompkins says the use of two types of forward-facing sonar has been instrumental in seeing exactly what he is fishing on the bottom.

“I wanted to try to save some fish and back off a little,” he says. “But I had other boats around me and I was afraid they might move in if I left, so I kept catching them. I’m a later boat draw tomorrow, so hopefully, I can get back on the primary spot.”

Thompkins has other spots in the same area that are also productive.

“I’ve got a little rotation of a few spots in about a 100-yard area,” he says. “Once I catch one or two off a spot, it busts the fish up and I have to leave it to let them set back up. So I just rotate through the area to give each specific spot time to rest.”

Thompkins will now enter day two with over an 11-pound lead.