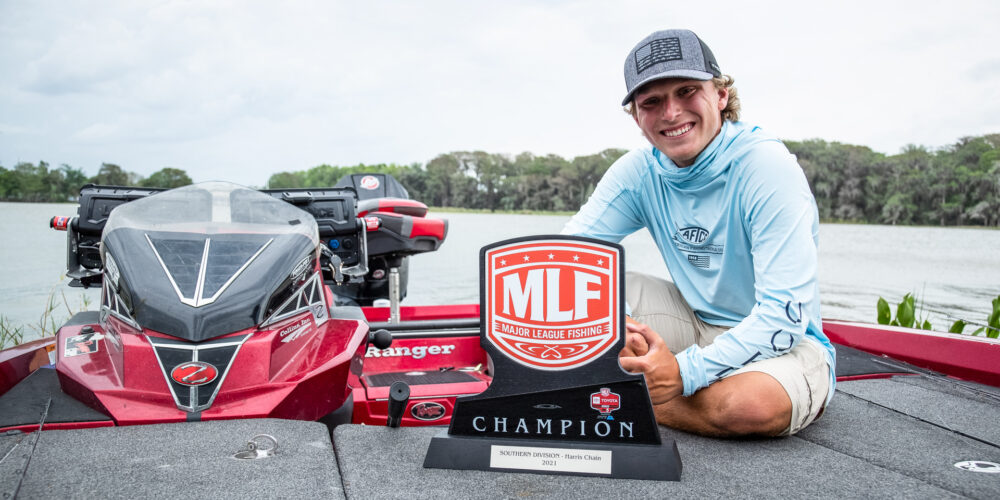 There is an old saying in tournament bass fishing that goes, the best way to get over a bad tournament is to go fish another tournament.

Nineteen-year-old Jordan Thompkins of Myrtle Beach, S.C., took that saying to heart this week. After finishing 187th in the B.A.S.S. Open on the Harris Chain of Lakes several weeks ago, Thompkins decided to “get over” that bad tournament by fishing the Toyota Series presented by A.R.E. Southern Division event at the same venue. Determined to right the ship, Thompkins stayed in Florida after the Open and dedicated several weeks to fishing the chain every day to figure out how to overcome his bottom of the barrel finish.

“Finishing nearly dead last in the Open really motivated me like nothing else ever has,” Thompkins says. “I don’t like to lose and I refused to get my year started off on such a bad foot. I was going to make sure I redeemed myself before I left the Harris Chain.”

His path to redemption started by hauling in an astounding 31 pounds, 6 ounces on the first day of the Toyota Series – and he never looked back. He kept his foot on the gas on the final two days, checking limits of 15 pounds, 7 ounces and 18 pounds 3 ounces on the final day. His final tally for three days added up to 65 pounds, giving him a winning margin of 12 pounds, 8 ounces.

Thompkins huge limit the first day came from Lake Beauclair near the passageway that connects to Dora. On the Sunday before the tournament he found a wad of giant fish on his LiveScope that were “set up right” at the passage entrance.

“It was just a hard spot with some scattered eelgrass,” Thompkins explains. “I knew if I could get to those fish before they busted up, I could probably catch a 25-pound bag.”

When he arrived on day one, Thompkins went to work on the big bass with a Rapala DT 10 crankbait in a chartreuse color, cranking the hard spot and ripping the crankbait though the scattered eelgrass. His bag on day one included two bass over 8 pounds.

Just when it looked like Thompkins was on easy street, he met adversity the second morning in the form of anglers swarming the hot spot and a constant flow of boat traffic right over his primary area. Yet, he never let the melee get the best of him. Instead, he kept cool and weaved in and out of traffic, catching fish out from under other anglers’ boats.

“I wasn’t too concerned because I had a lot of other fish located in Harris,” Thompkins says. “I figured I could catch 15 pounds a day in Harris. But I kept going back to Beauclair first thing to see if I could get the big ones to fire up again.”

On days two and three, Thompkins started in Beauclair, rotating between the DT 10, a ¾-ounce  Z-Man/Evergreen ChatterBait Jack Hammer teamed with a Z-Man Scented Jerk ShadZ and a gold Megabass Vision 110 to catch about 12 to 13 pounds before relocating to Harris. Once in Harris, he caught some key fish off a 10-foot hydrilla flat that had “hot spots” in it. When fishing the deep grass the ChatterBait was his key player.

While many might think that Thompkins giant catch on day one was his most magical day of the event, he says today was actually more special.

“I’m trying to learn how to manage fish and locations in multiple day events,” he says. “You have got to do that to win these tournaments. Catching a huge bag on one day is great, but you have to be able to back it up. Today was the day I needed to prove to myself that I could that. I came back over in to Harris with about 13 pounds and I wanted better than that. In Harris things just clicked: I knew where to go; I knew what to do; I could basically call my shots. When I caught my kicker that weighed about 5 pounds from the exact spot where I knew I was going to get a bite: that was just really special. It’s like the whole tournament came together at that moment.”

Another special element to Thompkins’ final day was having his dad, Timmy Thompkins, out watching and cheering him on. The elder Thompkins fished the FLW Tour for five years and has helped guide his son in professional fishing.

When handed he was handed the Toyota Series trophy, the young Thompkins got emotional.

“I have the good Lord and my dad to thank for all of this,” Thompkins says. “There is no way I could have done any of this without them. I am so blessed to be able to take the things my dad, my family and God have taught me and use them to make the right decisions this week. It’s been unreal.”