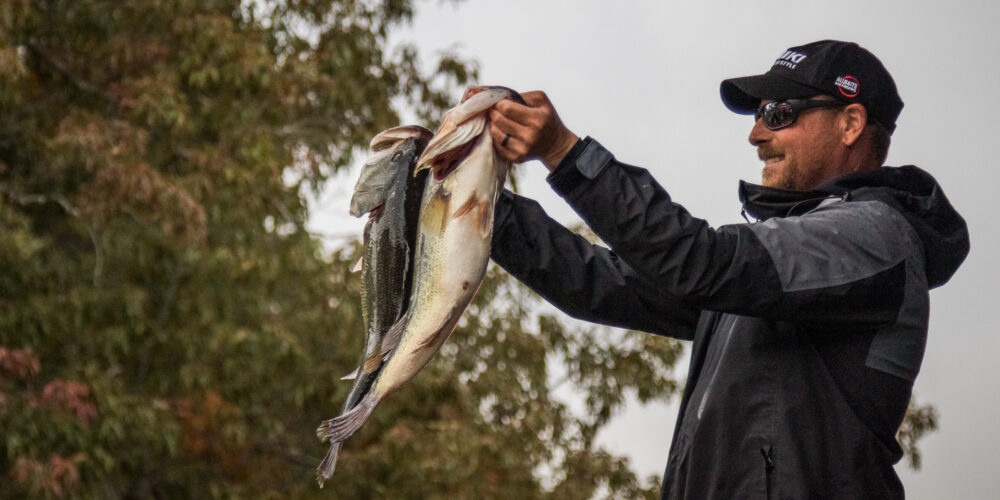 COUNCE, Tenn. – After a rainy, windy and cloudy Day 1 of the Toyota Series Championship Presented by Guaranteed Rate on Pickwick Lake the weights are stacked fairly tightly atop the leaderboard. Unsurprisingly, Bryan Thrift leads the charge after catching 19 pounds, 15 ounces and sits just 1-7 ahead of Texas pro Chris Digino. Thrift is undoubtedly one of the best closers in the game, and even though there’s still two days of fishing left to decide a champion, the Shelby, N.C., pro has his sights set on bringing home one of the few major wins his resume lacks.

True to Thrift form, he utilized a pretty good chunk of Pickwick to scrounge up his leading limit.

“Today was a little better than I thought, like I didn’t catch any big ones in practice,” says Thrift. “I thought if I could have a good day I might catch 10 to 12 pounds and do it on six keeper bites. I think I ended up catching seven today, but that was pretty much the day. It’s definitely not easy at all.

“This morning I started in a place I thought I could catch a couple early, and I did, but after that it was a struggle. I ran 40 miles up and fished my way back. I burned a lot of gas today.”

Over the years Thrift has seen Pickwick plenty of times in the spring and summer, and though he’s had success on other parts of the Tennessee River in the fall, this trip to Pickwick is all new.

“This is my first time being here in the fall and it’s really not as good as I thought it would be,” Thrift says. “I thought it would be easier to get bites and it’s not. I don’t know if it’s pressure, the weather, or what’s going on. I know my day looks good on paper, but I have no idea what I’m doing.”

Thrift has never been one to divulge too much information early on in the event, but despite his lack of experience on Pickwick in the fall, he’s a quick study and may have found something to build off going forward. Of course, a few more big bites along the way wouldn’t hurt either.

“I never imagined catching two 6 ½-pounders like I did today,” he says. “That was nowhere in my mind. But I kinda got an idea of what I want to do. I got a little deal I’m going to run and hopefully get a couple bites and it’s going to work.”

Despite Thrift’s accolades, a Toyota Series Championship has eluded him thus far in his career. While it may not be a life-changing win for him, he undoubtedly doesn’t underestimate the value it holds.

After finishing runner-up in the All-American back in June, Rod Mackinnon III put himself in good position to try and grab a Toyota Series title and end the year on a high note after weighing 16 pounds, 15 ounces.

Hailing from Middletown, N.Y., Mackinnon is a long way from home on a foreign body of water. Even after spending practice with pro Lance Freeman, Mackinnon wasn’t fully dialed for Pickwick before the tournament. Luckily, he’s got some momentum and good fortune on his side in the state of Tennessee.

“I didn’t really get to see Pickwick proper before the tournament since we practiced [below Pickwick dam],” says Mackinnon. “So, I just went off what I read on MLF’s website about past tournaments and did as much research as I could. I’m from New York, we’re 16 hours away.

“But Tennessee has been good to me. I had the All-American on Douglas in June and got second there. Now I’m leading here.”

Fishing with Cameron Mattison on Day 1, Mackinnon took what he learned from pretournament reports and practice and put them to use.

“It started out junk fishing and throwing what looked like needed to be thrown,” says Mackinnon. “In the morning it was a 3-pounder on a spinnerbait, then I caught one on a [Reaction Innovations] Vixen, which is no surprise here in Tennessee. Then we fished some bluffs and I threw a jig and I got on something later in the day – a reaction bite – and went to catching them. I only put eight keepers in the boat but they were the right ones.”

With just over a 2-pound lead, Mackinnon looks to back up a great first day, and hopefully buck the trend of second-place finishes he’s seen throughout the last two years.