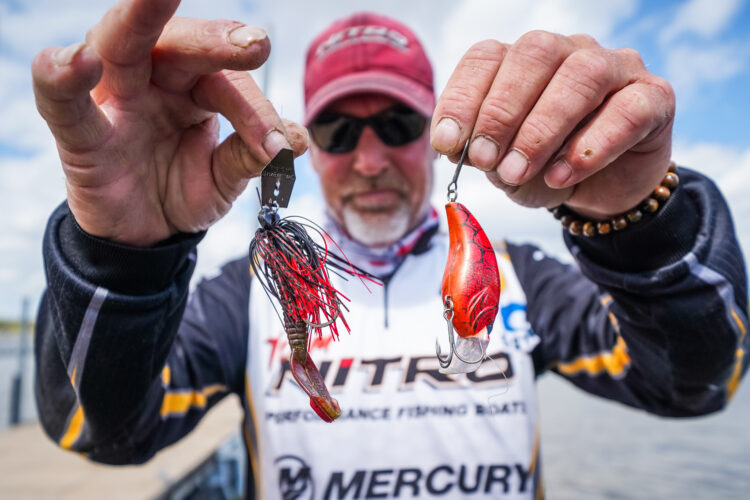 Spinnerbaits and jigs go together with Grand Lake in the springtime like ham and cheese on a sandwich. So, the fact that the majority of the top 10 pros on Grand for the Toyota Series Presented by A.R.E. event utilized them to some degree isn’t a shock. Fat, healthy prespawn fish were staging in coves and pockets waiting to be plucked in the second stop of the Plains Division season, which was presented by Fenwick.

Dirty water prevented any sight-fishing from occurring – though some pros reported catching fish off beds – so moving baits and soft plastics were the focal point to cover water in order to find stretches of bank where fish were staged up.

If you’re heading out on Grand soon, or any lake with hard cover, dirty water and prespawn fish, you might want to consider having some of these baits tied on.

1. Andy Newcomb captured his first Toyota Series win thanks to Grand staples – a jig and a spinnerbait. Early in the week a BOOYAH Covert Spinnerbait with a small, gold Colorado blade and bigger, silver willow blade in cleaner water or a chartreuse War Eagle spinnerbait that he swapped the painted blades on for smaller willow blades in order to fish it a little faster did the job. He also added a BioSpawn ExoSwim (Feider shad) to his spinnerbait for extra bulk and dyed the tail chartreuse.  On the final day, a ½-ounce Apex Tackle Company Dirk’s Jig with a Zoom Ultravibe Speed Craw did all the heavy lifting.

2. Chris Jones leaned heavily on the reaction bite, locking either a BOOYAH Covert Spinnerbait or a BOOYAH Flex 2 square-bill crankbait in his hand throughout the event.

3. Catching the biggest bag of the tournament on Day 2, Kyle Minke crawled a ½-ounce or ¾-ounce Z-Man ChatterBait Jack Hammer with a Z-Man RaZor ShadZ trailer on the bottom to imitate a crawfish for most of his big bites. Occasionally he’d mix in a crankbait or two including a 13 Fishing Jabber Jaw (truffle butter) square-bill.

4. A trio of crankbaits helped Joey Cantrell to a good finish. A Strike King KVD 1.5 (delta red), a 2.5-style squarebill or a balsa flat-sided crankbait, which he used on the final day, were all he needed to catch Grand Lake bass.

5. Fishing for bass he thinks were actually postspawn, TJ Martin caught some fish on a spinnerbait, but a 5/16-ounce Jewel Finesse Jig with a Zoom Ultravibe Speed Craw was the deal.

6. Brent Algeo relied on two square-bills to get the job done. Throwing a Strike King 1.5 (blue craw) or a 2.5 with a crawfish carmel-colored Crank Wrap on it, Algeo was able to cover water with ease.

7. Fishing some history and some new water, James Watson  tossed a ¾-ounce Trophy Bass Company spinnerbait on 20-pound MAXIMA Ultragreen monofilament to cover water. Once he got bites in an area he’d pitch a Tackle HD Brush Buster with a ½-ounce weight on 20-pound MAXIMA fluorocarbon.

8. Eric Olliverson caught his kickers on Day 1 throwing a white ½-ounce War Eagle buzzbait, but the rest of the week a 6th Sense Crush 100 (lava treuse) did most of the work.

9. Fishing slower than most, Kyle Weisenburger pitched a Reaction Innovations Sweet Beaver on either a 3/8- or ½-ounce Strike King tungsten to rock transitions most of the event. When things got tough, Weisenburger did have to employ a wacky-rigged Yamamoto Senko (black with red flake).

10. Making yet another top 10 on Grand fishing history, Toby Hartsell stuck with either a Deps Evoke crankbait (red craw) or a Z-Man ChatterBait Elite to make it happen.