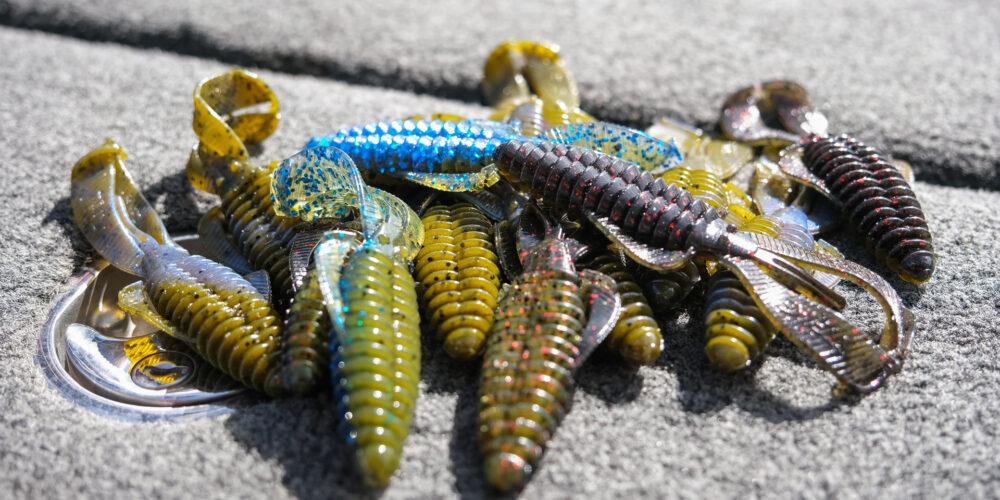 GROVE, Okla. – With all stages of the spawn in play, flipping to bedding bass and targeting key transition fish was the strategy for success in the second stop of the Toyota Series Presented by A.R.E. on Grand Lake.

While most of the Top 10 focused on visible beds with jigs or beaver-style baits, a few caught big limits triggering reaction strikes with spinnerbaits.

Here’s a look at the lures that helped all 10 cash a check this week.

1. Despite a tough morning bite across Days 2 and 3, Jeff Reynolds stuck to his sight-fishing strategy to pull out a victory. He flipped a Texas-rigged Reaction Innovations Sweet Beaver to bass behind docks, relying on a ¼-ounce tungsten weight and 3/0 Trokar hook to do the heavy lifting.

2. Cade Alsbury hunted the shallows for big bites, hitting more than 80 waypoints to find the right fish. Putting a Texas-rigged YUM Christie Craw in tinfoil right in the bedroom, he switched up between a ¼-ounce and 3/8-ounce weight depending on their temperament.

3. Kyle Schutta was a self-described “One-Rod Todd” the entire event, catching all of his fish on a 3/8-ounce homemade jig. He used a 13 Fishing Envy Black 2 to deliver the presentation, targeting rock transitions along steep banks.

4. After deciding to target bedding fish from Day 1, Michael Harlin spent most of his time in clear water from Drowning Creek to the dam. He was able to fish a Big Bite Baits Fighting Frog and a Strike King Rage Bug all the way to fourth place.

6. Throwing a heavier jig than most, Curt Warren locked up sixth place by triggering reaction strikes in visible beds 5 to 6 feet down. A 5/8 oz Bass X jig did most of the heavy lifting for him this week.

7. Going against the grain, local angler Kyle Kitts caught most of his fish on a custom homemade 5/8-ounce spinnerbait. Chartreuse and white were his key colors, with an Indiana blade triggering reaction strikes around docks and wood structure. Kitts also threw a green pumpkin YUM Tube with a 3/0 hook on a 3/16-ounce Texas rig.

8. Orlean Smith did most of his damage with a black and brown Buckeye Lures Ballin’ Out 2 Jig with a Strike King Rage Bug trailer in blue craw/red flake and the same Rage Bug on a 5/16-ounce jig head from Adrenaline Tackle. He began the event fishing shallow, but had to switch things up mid-tournament, making a move to clear water.

9. A heavy-hitter the first two days, Jeremy Johnson caught all of his best bass on a BOOYAH Covert Spinnerbait with an orange Colorado blade. He stuck to stained water with wind-blown banks, doing his best work under cloudy conditions. When he tried for spawning bass, Johnson went with a Texas-rigged Gene Larew Biffle Bug.

10. Jason Bonds spent the majority of his week sight-fishing the shallows with a Strike King Rage Bug in blue craw. Rigged with the new Owner Haymaker EWG Worm Hook, he left plenty of Grand Lake bass with a sore jaw.