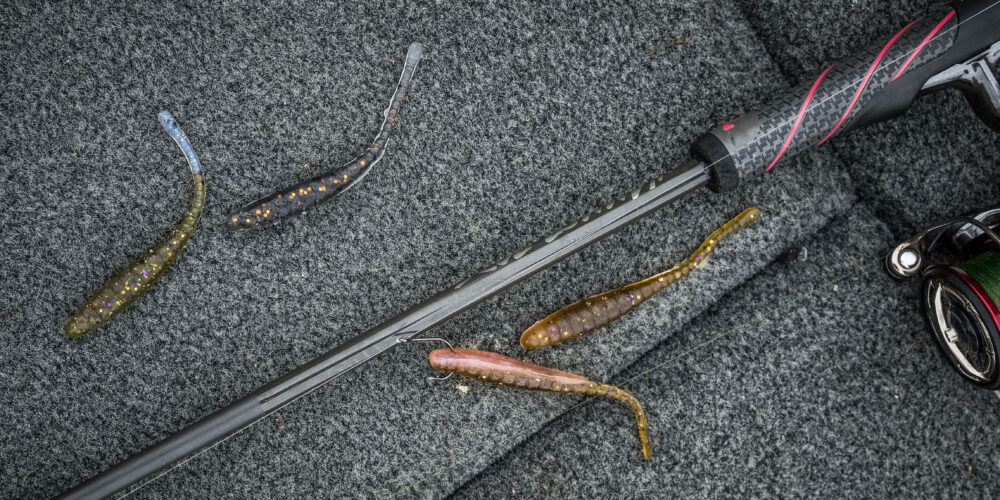 The Toyota Series Presented by A.R.E. Northern Division event on Lake Champlain was as good as everyone expected, with a ton of smallmouth hitting the scale and some big green fish showing up as well.

With pros mostly focusing on the north end of the lake and either exclusively targeting smallmouth or mixing green and brown fish, a solid variety of baits and patterns played. While the standard drop-shot did a lot of damage (paired with forward-facing sonar in most cases), it wasn’t the only way to catch a bass, and some pros dug deep into their bags of tricks to get an edge.

Here’s what worked best on Champlain.

1. Stephen Estes earned the win in standout fashion by targeting deep smallmouth relating to bait. His Lowrance ActiveTarget was probably his most valuable asset, and he put ‘em in the boat with a drop-shot consisting of 10-pound-test Vicious No-Fade Braid, an 8-pound-test Seaguar Tatsu leader, a 1/2-ounce Eco Pro Full Contact Drop Shot Weight and a drop-shot bait from Hawg Pours Hand Made Bass Baits called the Hawg Teaser.

3. Champlain stick Bryan Labelle fished a wacky-rigged 5-inch Yamamoto Senko, a Dirty Jigs Scott Canterbury Flippin’ Jig with a Zoom Super Chunk trailer and a topwater. Weighing a combo of species and running a huge section of the lake on Days 1 and 3, Labelle fished one of the more diverse game plans of the week.

4. Dakota Ebare fished for shallower smallmouth chasing bait and used a variety of tactics to catch them. His top producer early in the event was a Jackall Rerange 110. Later, he did his best work with a drop-shot with a 3.75-inch Z-Man StreakZ on an Owner Mosquito Hook.

6. Swapping between smallmouth and largemouth early, Bryan Thrift trailed off on the final day when he could only manage to catch largemouth. Throughout the week, Thrift caught his fish on everything from his signature series Fitzgerald Fishing Bryan Thrift Tungsten Micro Jig (green pumpkin yellow) with a Strike King Rage Craw, a Damiki Stinger (watermelon candy) Texas-rigged and a Neko-rigged drop-shot with a Berkley PowerBait MaxScent Flat Worm, a walking topwater and a SPRO Bronzeye Frog.

7. Martin Villa also targeted bait-related smallmouths and caught some with a moving bait, but he went with a drop-shot to catch the vast majority of his fish. His drop-shot bait of choice was a Strike King Ocho that he cut to give a better action and create a striped, perch-like appearance.

8. Local angler JJ Judd targeted a combo of largemouth and smallmouth, fishing mostly offshore for both. For the smallmouth, a drop-shot with a Berkley PowerBait MaxScent Flatnose Minnow got the call most of the time. For the largemouth, he rolled with a 3/4-ounce Eco Pro Tungsten Trokar Flipping Jig with a matching black and blue Bizz Baits Killer Craw for a trailer. He also caught a few fish on a walking topwater.

9. Joseph Thompson fished a topwater, a drop-shot with Berkley PowerBait MaxScent Flat Worm and a 3/8-ounce football head with a Yamamoto Double Tail Hula Grub for smallmouth. For largemouth, he skipped docks with a 5-inch Yamamoto Senko that he Texas-rigged.