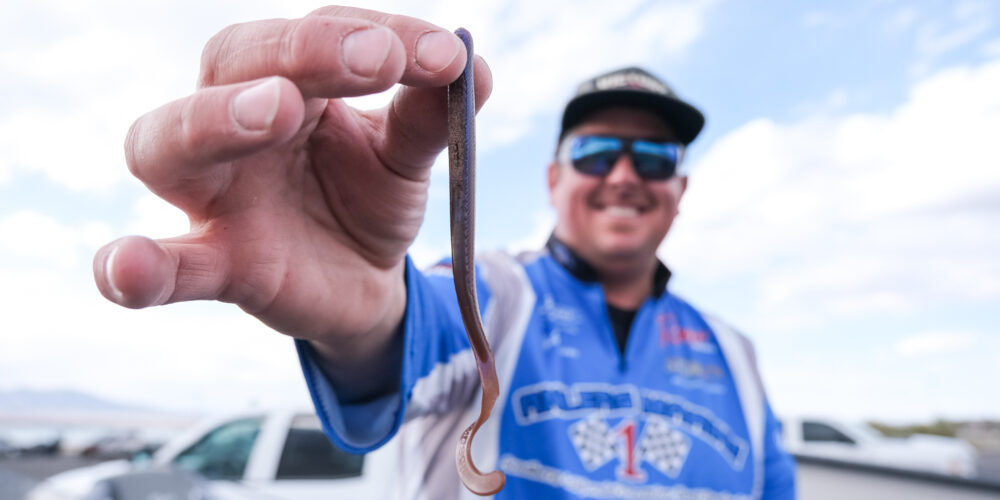 LAKE HAVASU CITY, Ariz. – The Toyota Series Presented by A.R.E. Western Division event on Lake Havasu went pretty much to plan, with prespawn fish doing the heavy lifting and largemouth being a lot of the weight. Patrick Touey won going away with a swimbait, and a bunch of other Havasu staples followed him up, with pros cranking, swimming, flipping and going finesse.

Here’s what got it done in the desert.

1. Slinging a swimbait all week, Touey kept a single rod and reel in his hand for all three days of competition: a 7-foot 6-inch iRod Genesis III 764C. Touey noted that the very parabolic action of the rod was essential for his treble-hooked swimbait. He paired his iRod with a 7.4:1 gear ratio Shimano Curado 201K with 15-pound-test fluorocarbon.

2. Kyle Grover slung an umbrella rig around for a lot of the week on a 7-foot, 10-inch St. Croix Victory VTC710XHM casting rod with a 7.2:1 gear ratio Shimano Tranx 200 A. He tipped his umbrella rig with 4-inch Basstrix Hollow Body Paddle Tail Swimbaits.  When he wasn’t throwing the umbrella rig, he would slow down with a Carolina-rigged Roboworm Curly Tail Worm he threw with a 7-foot, 3-inch St. Croix Victory VTS73MXF spinning rod.

3. Patrick Whitaker employed a swimbait to claw his way back from a tough first day and land inside the Top 10. He used 20-pound fluorocarbon and a 6.3:1 gear-ratio reel to perfect his presentation.

4. Mark Williams got to work with a Jenko Fishing Booty Shaker Swimbait on a custom 7-foot, 8-inch moderate action glass swimbait rod. He stated the glass rod was essential for allowing fish to eat his bait.

5. The other Williams brother in the Top 10, Mike Williams targeted prespawn Havasu fish with an unnamed swimbait and Rapala DT 10 crankbait.

7. Improving his daily limit throughout the event on Havasu, Justin Kerr did work with an Evergreen CR 10 crankbait each day. He slung his cranks with a 7-foot, medium-action Evergreen Combat Stick rod and a 7.3:1 gear ratio Daiwa Tatula SV TWS.

8. Jason Akins spent the bulk of his tournament targeting deeper fish with a Basstrix Hollow Body Paddle Tail Swimbait or flipping a Yamamoto Mermaid up shallow. He also spent some time finessing with a Roboworm Curly Tail Worm in oxblood on a drop-shot.

9. Nate Caldwell did his damage this week on a drop-shot rig with a 3.5-inch Strike King Half Shell in green pumpkin. On the final day, he also mixed in a 5.8-inch Keitech Swing Impact FAT Swimbait with a belly-weighted hook.

10. A lock in the Top 10 at Havasu, David Valdivia went with an ultra-finesse approach. Mostly probing prespawn areas with a SPRO Phat Fly thrown on a 7-foot, 6-inch light action Performance Tackle custom rod designed specifically for the technique. He also mixed in a Deek’s Jigs football jig with a Yamamoto Fat Baby Craw for a more traditional approach.