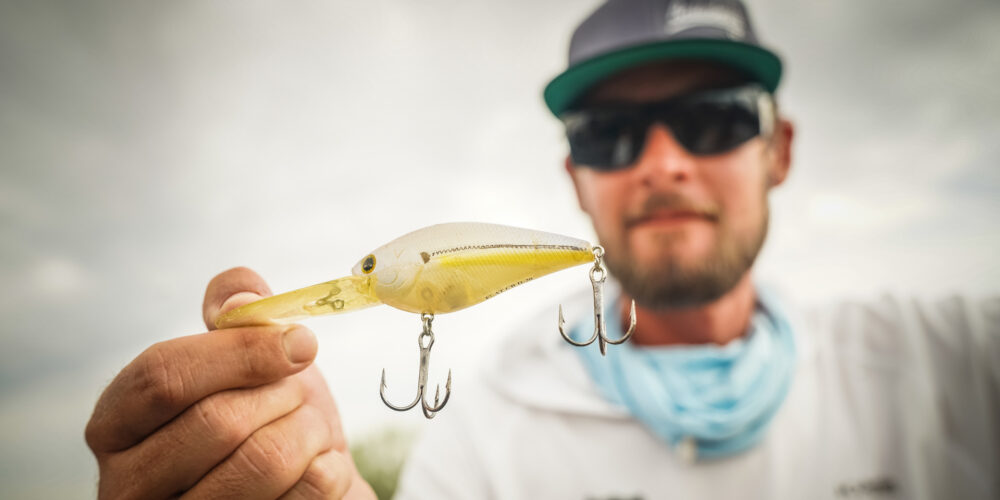 Forget the finesse stuff. Unless you were fishing aggressively on Lake Havasu, you weren’t getting bit.

Ripping crankbaits through deep grass accounted for the best results, but the top anglers at the Toyota Series Presented by A.R.E. Western Division finale found success in other power-fishing ways, even some unconventional ones.

1. Cast, crank, rip, repeat. That was the winning pattern for Andrew Loberg, as he ripped a Rapala DT 16 and a Strike King 10XD in various colors out of grass to prompt reaction strikes. And by rip, we mean RIP, as he broke crankbait lips and snapped line doing it throughout the week.

3. Another in the cranking game, Roy Hawk did most of his damage with a Duo Realis G87 20A (morning dawn). Though, he did manage some key kickers throughout the week on a discontinued Yamamoto worm.

4. The younger Williams brother, Mark Williams fished to same as his brother and often in sight of each other, ripping a myriad of crankbaits, including a Lucky Craft Flat CB D20 (chartreuse shad).

5. Bucking the crankbait trend, Frankie Mueller ran far up the river to capitalize on bass pushing into the tulles on account of the rising water. He hit “the best tulle patches he knew” with either a red-and-black River2Sea Ish Monroe Phat Mat Daddy Frog or by flipping a Missile Baits D Bomb (green pumpkin blue) or Zoom Ultra Vibe Speed Craw.

6. Three Top 10 finishes allowed Phillip Dutra to take home the Angler of the Year title. He did it at Havasu by running heavily vegetated pockets near the mouth of the river flipping a crayfish-colored Missile Baits D Bomb. He also caught some good fish on a Snag Proof Bobby’s Perfect Frog, a Z-Man Evergreen ChatterBait JackHammer and mixed in a squarebill.

7. Being a “ninja in the crowd,” Chris Kinley was meticulous with his casts to target pressured fish in the Bill Williams Arm. There, he focused on grass and tulles with a green pumpkin-purple tube made by fellow Top 10 angler Frankie Mueller or a shad-colored 3/8-ounce homemade vibrating jig.

8. Kazuki Kodama was the lone angler to make the Top 10 with a finesse approach. Check that, it was finesse tackle – a Zoom Swamp Crawler (June bug) on a Neko rig with a 5/64-ounce weight and 6-pound Sunline – but he was actually popping it out of shallow grass to prompt a reaction bite like the top finishers were with crankbaits.

9. No one was more specific about what they sought this event than Randy McAbee Jr. He ran 50 points a day that were midway back, steep, with a mixture of rock and grass, and had shade on the north side. Then once the sun got up, he “ground the lip off” perch, shad and crayfish-colored Strike King 5XD cranks along the shade lines.

10. Pure junk fishing – that was what Logan Huntze was doing. With almost no pattern or experience, Huntze ran from the lower end to the river throwing at anything and everything. That said, cranking a shad-colored Strike King 6XD or a 6th Sense Cloud 9 Series did the most damage, and flipping a Missile Baits D Bomb (candy grass) produced some quality.