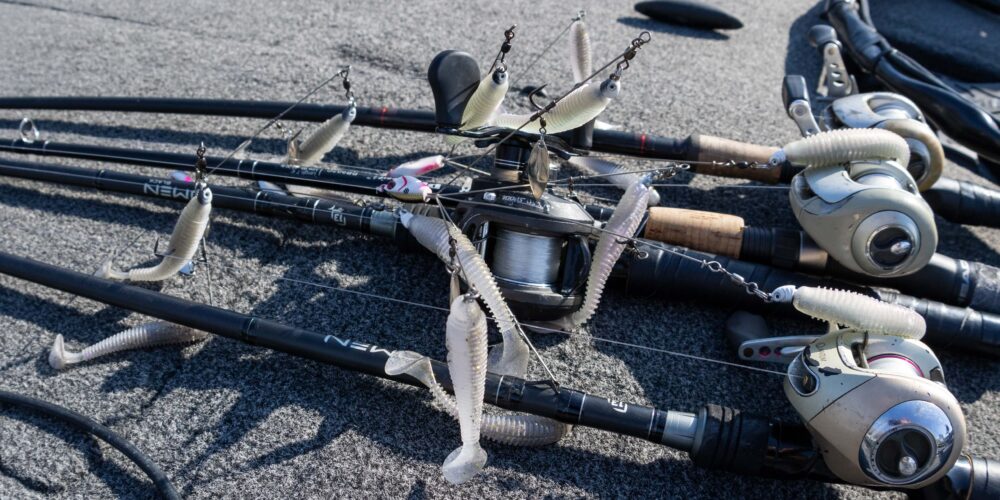 OSAGE BEACH, Mo. – It wasn’t rocket science to catch bass on Lake of the Ozarks for the Toyota Series Presented by A.R.E. season opener of the Plains Division Presented by Outlaw Ordnance. The event, which was presented by Smart Digital, was dominated by locals for the most part who utilized forward-facing sonar to fish brush and rock piles with umbrella rigs. Sure, there were a few other presentations that produced, but if you’re heading to the Ozarks any time soon, you’ll want to load up on A-rig supplies.

1. Taking the W on his home pond, Brock Reinkemeyer stuck to the Gravois arm for the bulk of the event and tossed a YUM YUMbrella Flash Mob Jr. paired with 3.25-inch Strike King Rage Swimmer swimbaits. He also mixed in a Megabass Vision 110 (Kameyama ghost pearl) and caught a clutch 4-pounder on Day 2 on a Motion Fishing Finesse Jig with a Zoom Ultra Vibe Speed Craw.

2. Cracking the biggest bag of the event on the final day (23 pounds, 7 ounces) helped push Josh Shirley to second. He did it by doing what he did the entire event – targeting brush with Garmin Panoptix LiveScope and throwing a J&H Tackle Swim N Frenzy umbrella rig with 3.75-inch Hawgz Custom Baits swimbaits.

4. Doing his homework before the event helped Arkansas pro Travis Harriman finish in fourth. Like most of the top pros, he ran new brush each day and tossed a YUM Scottsboro Flash Mob Jr. kit running the 3.5-inch swimbaits on his hooks and the 3-inch versions on his dummies. He threw it on 25-pound Sunline Shooter fluorocarbon.

5. Austin Culbertson used his local knowledge to run brush and rock piles on the lower end of the lake with the help of two Ozark staples  – a YUM YUMbrella Flash Mob Jr. with Tightlines UV Docs Dipper swimbaits (which he ran out of on the final day) and a weighted Megabass Vision 110+1 (wakin reaction). He threw both on FX Custom Rods and spooled 20-pound Seaguar InvizX for his A-rig.

6. Grant Akers ran up the lake to bank his first Top 10, though, he still did most of his damage with a YUM YUMbrella Flash Mob Jr. rigged with either 3.3- or 3.8-inch Keitech Swing Impact FAT swimbaits in pro blue red pearl or black shad colors, which he also added a dab of chartreuse to his middle swimbait for a bit of extra color since he was fishing more stained water. He also weighed fish on a ½-ounce Dirks Jig (cold water color) with a Crock-O-Gator Ring Craw (green pumpkin candy) and a Megabass Vision 110 (French pearl US or Table Rock SP).

9. To make his first MLF Top 10, Chris Bridges started catching his fish deep on an umbrella rig, which he threw on a 7-foot, 6-inch medium-heavy Lew’s Team Custom Pro rod and 20-pound-test Strike King Tour Grade fluorocarbon. By the final day, he wound up fishing in roughly 4 feet of water and throwing either a Dave’s Custom Baits Black Market 110 (Missouri shad) or a Megabass Vision 110.

10. Fresh off a Top 10 at the Toyota Series Championship on Pickwick Lake this past fall, Chris Digino is keeping the pace going. The lone Texas pro atop the leaderboard, Digino kept it basic, yet different, by slow-rolling a YUM YUMbrella Rig with Tackle HD Swimmer Swimbaits and VMC Boxer jigs. He used a 6.2:1 Lew’s BB1 Pro Speed Spool teamed with a Dobyns Champion Extreme HP 746 rod to put ‘em in the boat.