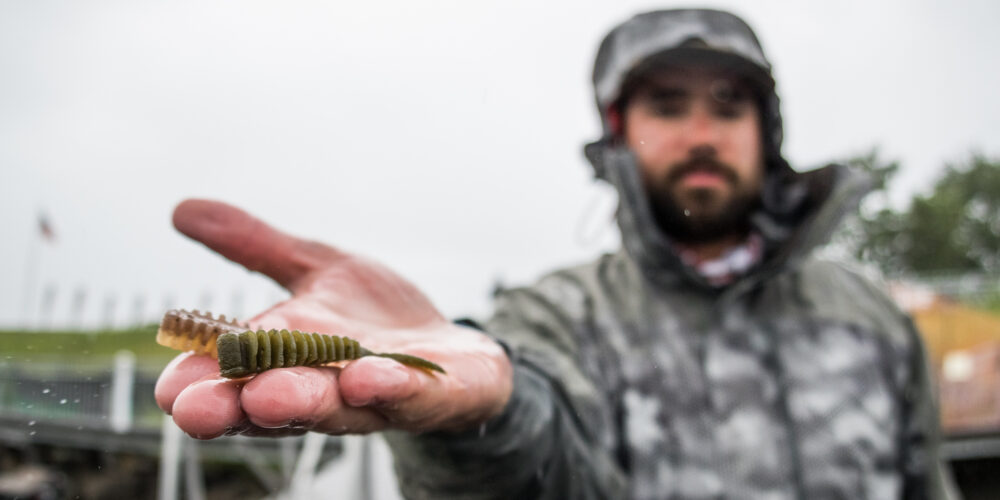 As expected, a Johnston brother won and smallmouth dominated in the Toyota Series Presented by A.R.E. Northern Division event on the St. Lawrence River. Summertime had most of the fish pretty deep, be it in the river proper or out on Lake Ontario, which meant that the fun shallow alternatives like jerkbaits and hair jigs didn’t get much play. That being the case, a drop-shot and a tube got a workout in the depths. If you’re lacking bait ideas for smallies, some of the stuff the pros threw will give you ideas, and some will just leave you looking for answers.

1. Winning convincingly, Chris Johnston used an unidentified prototype worm on a drop-shot for most of his fish. It sounds like you’ll have better odds of learning more about once the B.A.S.S. Open out of Clayton wraps up. For the rest of his tackle, he used a Daiwa Certate LT 2500, a 7-foot, 1-inch Daiwa Tatula Elite spinning rod, 10-pound Seaguar Smackdown with an 8-pound Seaguar Gold Label leader, a No. 2 Gamakatsu TGW Drop Shot Hook and a 3/8-ounce drop-shot weight. He also caught a few on a 3-inch tube with a 3/8-ounce head.

4. Winning the river tournament, Brent Anderson did most of his work drifting a Ned rig. He says his bait of choice was a Z-Man Finesse TRD and that a key part of his arsenal was a prototype Ned rig stick from Redemption Rods. He used a 1/6-ounce Z-Man Ned LockZ HD Jig Head as well as a 3/16-ounce homemade football head for his Neds, going with the football head on rockier stretches.

5. Jonathan Robla also fished in the river, plying an X Zone Lures X-Tube with a 3/8-ounce head, a jig and a Berkley PowerBait MaxScent Flat Worm.

7. Charlie Hartley crushed them in the river, plying a drop-shot with a Strike King Z-Too and Baby Z-Too. He rolled with a 7-foot, heavy Falcon BuCoo SR, braid, a 10-pound Seaguar InvizX leader, a ½-ounce WOO! drop-shot weight and either a No. 2 or 1 Owner Mosquito Hook.

9. Scott Cooke went old-school with a Snack Daddy Lures Elite Tube on a ½-ounce head in a discontinued cinnamon color. For his tackle, Cooke used a Lew’s baitcaster, a Cashion rod, 30-pound braid and a 15-pound Seaguar InvizX leader.

10. Marty Robinson ran to the lake on the first two days and fished fairly shallow with a drop-shot, hair jig and other baits. Tired of the rough rides, he stuck to the river on the final day. Robinson says a Zoom Ultra Vibe Speed Craw caught fish for him.