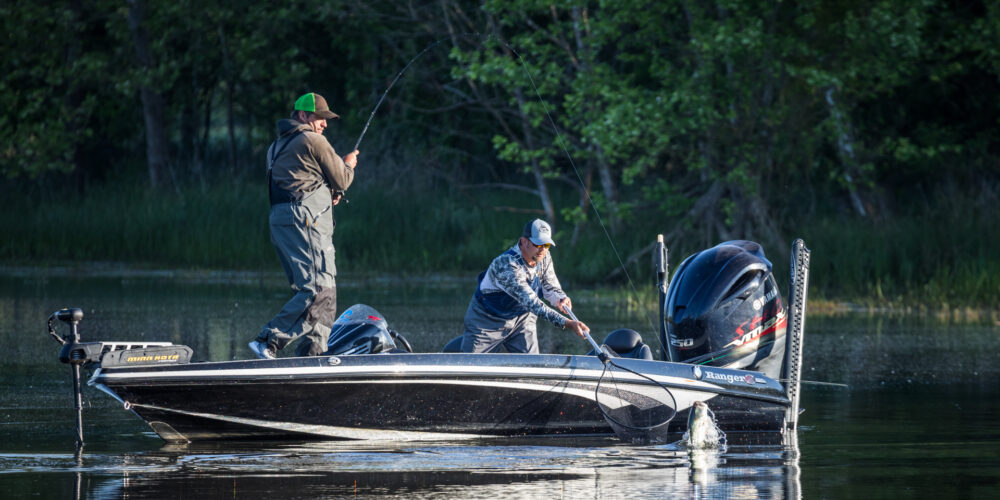 Lake Dardanelle is a volatile lake that some anglers click with and others simply do not. That held true once again this week.

Even amongst the Top 10, few anglers truly had consistent performances across all three days, but even one big bag was sometimes enough to set yourself apart.

At some point, Zach King is going to get the signature victory on his home lake … right?

This week, he notched his 11th Top 10 in Toyota Series and BFL events on Dardanelle. It’s gotten to the point where they might as well write his name on a check prior to any event there. Unfortunately, the big check once again eluded him despite being in second going into the final day for the third time. This time, though, King knows it wasn’t his own fault.

That’s a hard thing to do, as he’s one of the best at finding sneaky backwaters most don’t know about. Fishing a truly sneaky backwater area, King caught an early limit each morning targeting grass clumps and single lily pads just starting to grow. The key was dragging a YUM Swimmin’ Dinger (green pumpkin with the tail died chartreuse) slow. But not just slow.

“I was fishing it slow, slow, slow,” King says. “Doing that helped a bunch because they were biting in there funny all week. You’d hardly feel the bites.”

After fishing his backwaters, he then ran grass lines along the main river channel, junk fishing between a BOOYAH Pad Crasher frog and old XCalibur spinnerbait. While the plan was incredibly consistent, once again it just wasn’t quite enough to get him the big trophy.

Most anglers struggled to get bites, let alone kickers. Theron Caldwell did, too, at least, outside of the morning hours.

While he came into the tournament hoping to fish grass, the water levels and clarity were too fickle for his liking.

It didn’t really matter where the rock was, be it around bridges in Illinois Bayou and Dardanelle Bay or far in the backs. What did matter was the time of day.

“I managed to catch two 4-pounders every morning cranking an old Lucky Craft RC 1.5 they don’t make anymore,” says Caldwell, who also mixed in a Z-Man ChatterBait Jack Hammer (black and blue) with a Jackall trailer you can’t find in the U.S. “But after the morning bite, it was tough sledding every day.”

Two little backwaters with 11 bridges got all of Bruce Parsons‘ attention this week.

Fishing in Illinois Bayou, Parsons marked a bunch of bridges with rock, wood and grass all around them that he’d cycle through every day. The reason was simple.

“The fish were just there, and they were the right ones,” he says. “I had three bridges that really seemed to be the best ones.”

Ultimately, he did a lot of junk fishing, saying it didn’t really matter what he threw in front of them, as he caught some flipping and got a key 5-pounder on Day 2 throwing a black-and-blue swim jig. Yet, the majority of his keepers came cranking either a 6th Sense Crush (chartreuse black) or Lucky Craft 1.5.

5. Dixon Makes Most of Minimal Bites

Wayne Dixon had one heck of a game plan going into the event. Almost none of it went to plan.

Originally, the local had found a good swim jig bite going in practice, but come the first morning of the event, he found out he wasn’t the only one who found it. Then again, it didn’t really matter. Neither he nor the other anglers caught a fish in the area.

“It was awful,” Dixon admits. “I had to go scrounge around and only caught five keepers flipping a JP Custom Craw.”

That “scrounging” theme never really went away. While he managed a 4-pounder right off the bat Day 2 in his swim jig spot – albeit on a BOOYAH Pad Crasher – he was hoping to save fish for Day 3 in case he made it.

Even then, he had some fish saved on the backside of Goose Island flipping a Strike King Rage Bug to reeds. The result was nearly the same as the first two days – minimal bites.

Coming straight from the Bass Pro Tour event on Lake Travis, he didn’t have hardly any time to practice. Then again, practice really hadn’t done him all that well at Dardanelle in the past anyway.

“Every time I come here, I run to Spadra or run to Shoal Bay and get on a great grass bite in practice, to the point where I think I’m going to catch 30 pounds,” he says. “Then the water falls a quarter of an inch and they vacate the grass. And then it’s always won around rock down in [Illinois] Bayou. So, I said, I’m not going to be ‘that guy’ again. I’m staying around rock this time.”

Yet, he still couldn’t get away from the flipping bite on Day 1, as he “caught the snot out of them.” Unfortunately, they were all small and he only had 7-7.  On Day 2, he finally decided to commit to winding a Z-Man ChatterBait Jack Hammer (white and chartreuse) with a Big Bite Baits Kamikaze Swimon (white) trailer around rock. The result was the biggest bag of the event – 20-10 – to vault him into the Top 10.

The final day, he realized the water had dropped yet again and “something wasn’t right,” so he caught a bunch of fish flipping a Big Bite Baits Tour Tube, but he kept trying to get bigger bites with the vibrating jig and it never happened.

Muddy water with only inches of visibility might be the worst conditions to focus on bed fish, but it seemed to work out just fine for Fred Roumbanis.

“The spawn came real late this season,” Roumbanis says. “We had an early wave at the beginning of March, and then we had this crazy weather, and it just caused the fish to keep backing off and holding off. So, I was targeting spawning fish.”

Obviously, he couldn’t actually see the fish to sight fish them. Instead, he looked for stumps, grass edges with hard bottom and anywhere he thought a bass could be spawning. The goal was to cover a lot of water, mainly in the Mud Creek area, with multiple baits – a Stanford Baits Boom Boom Frog (dawg frog and Fred’s frog) and a 4.5-inch Optimum Boom Boom Weedless Swimbait (black n blue and sexy minnow).

“I was fishing pretty fast, one or two casts, and if I didn’t get a bite I kept going,” he explains. “That’s hard, though, because spawning fish, you have to work them. At the same time, you’re not 100 percent sure if they’re there. But the reaction baits seem to at least trigger them. Then, if I got a bite, I’d drop the poles, really try to work that location and usually get them to bite again.”

Look out, Tackle Warehouse Pro Circuit. Andy “The Beautiful” Newcomb is coming, and he’s on a roll.

Fishing his first full Toyota Series season, the Missouri pro set two goals: win a tournament and win Angler of the Year. He did the first at Grand Lake and he accomplished the second at Dardanelle thanks to his third Top 10 of the season (and fourth Top 10 in a row dating back to 2020).

“How crazy is that?” Newcomb said in disbelief after being crowned AOY.

Not too crazy considering the work he put in, especially for this event. With little prior experience and AOY on the line, Newcomb came down to Dardanelle for a while to learn the lake, especially how to navigate it. Of course, as soon as the rains came, strong currents and mud came through last week and most of what he’d found was trashed.

“I ended up just picking up a spinnerbait, the same one I won at Grand with, and that’s what I caught my fish on,” Newcomb says.

The lure was a BOOYAH Covert Spinnerbait with a small, gold Colorado blade and bigger, silver willow blade. He also added a BioSpawn ExoSwim (Feider shad) to his spinnerbait for extra bulk and dyed the tail chartreuse. He also mixed in an Apex Swim Jig paired with a Strike King Menace Grub trailer (both white).

As money as that spinnerbait has been for him this season, where he threw it was key at Dardanelle.

“I had one really special spot where I weighed the majority of my fish from,” Newcomb admits. “It was four little patches of water willow near Piney Creek. I think it’s a perfect spot for prespawners and postspawners coming out of a bay. It had some good flow from the river but it was not direct flow. I didn’t want to put all my eggs in that basket, but it just kept reloading.”

Unfortunately, falling water and strong waves muddied up that key spot, and he only brought in four fish the final day.

All week, the Day 1 leader was jumping his old Phoenix Bumblebee over sandbars to get into two key backwaters way up the river. Everything worked out perfectly the first day, but clouds hurt him the second, and he says he needed the sun to get those bigger bites.

“That sun gets them tight to the cover I’m fishing,” he explains. “If they get away from cover and spread out, they’re really hard to target.”

Well, he had plenty of sun the final day. What he lacked was water. Hawkins figures the water in his area dropped a foot overnight, and he ended up getting stuck on a sandbar for two hours. Once he got off, he figured he could catch a limit fishing grass with an unnamed swim jig with Zoom Z Craw trailer, which he’d mixed in the first two days. However, he wanted go for the win, and that meant tossing a black SPRO Bronzeye Frog.

“I had the bites,” says Hawkins about Day 3, where he only brought in two fish. “I had five good bites, but I lost three of them, including a 6-pounder and a 5-pounder. Those were the first fish I lost all week. They weren’t biting really well with that falling water.”

In a tough tournament, many anglers opt to try for finesse bites. BJ Miller went the opposite route.

“I was flipping the biggest, heaviest, most obnoxious stuff that’s harder to ignore,” says Miller of his bait of choice, a Zoom Brush Hawg (green pumpkin with tails dyed chartreuse).

The plan worked like a charm the first day up near Shoal Bay and Spadra, especially around wood where he figures bass were still spawning. Unfortunately, his bite died quickly after. At midday on Day 2, Miller didn’t have a bite until he cranked up a pair of small fish with a Strike King 2.5 (chartreuse black back). That’s when he got a gift from a key fish he’d found in practice to get him to the final day.

“I had caught a 6-2 on Tuesday off a bed,” says Miller, who only weighed three fish the second day and two the final day. “Well, I checked her Wednesday and she was still there. Thursday she was gone. But I decided to check her again Friday and she’d moved off the bed but 10 feet away.

“The falling water just got at me. I used up all my spawning fish to get here.”