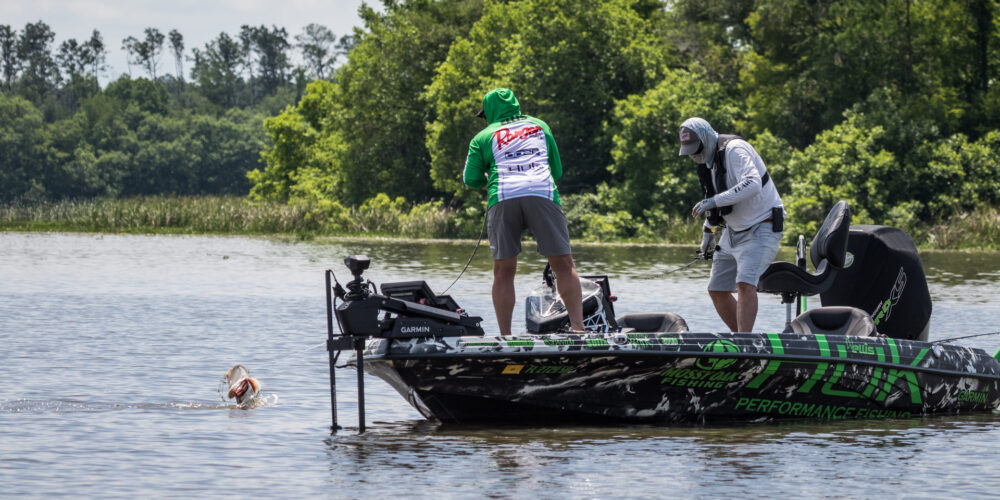 Spring Creek on Lake Seminole is usually a focal point in any tournament, but in the Toyota Series Presented by A.R.E. Southern Division finale it seemed to be THE place. Eight of the Top 10 pros set up shop somewhere within the creek to target transitioning fish around clumps of offshore grass or took advantage of an early shad spawn bite.

Winner Nick Thliveros pitched a worm around a 50-yard stretch of clumps of hydrilla and a sand spot offshore the entire event in Spring Creek. Surprisingly, the majority of the top pros had similar patterns.

From first-time Toyota Series pros to local aces, here’s a look at how they pieced the puzzle together on a dirtier and more finicky Seminole.

Making his fourth Top 10 on Seminole, local Matt Baty knows Spring Creek better than anyone else in the event, so it’s no surprise that he employed that knowledge to the fullest en route to nearly grabbing another win on his home pond.

Knowing the heavy rains that fell prior to the event would dirty up a normally clear Spring Creek and make things tough, Baty opted to forgo much practice. Instead, he wanted his fish to see his bait for the first time come tournament day.

“I didn’t practice much, and just having prior knowledge of the lake helped,” Baty says. “The first two days were all about that crankbait. I was fishing current breaks in Spring Creek and paralleling the edge of the grass where the current would run into it and make an eddy. I was just getting that crankbait down there and snatching it out of the grass. That’s how I caught all of my weight the first two days.”

With the current never picking back up to the level it was before the tournament, Baty decided to try something else on the final day.

“My cranking pattern started to peter out on me, so I scrapped it [Saturday],” he says. “I went to a place that I thought might be some shad there and a ChatterBait did all the work for me on a shad spawn.

“The key spot [on the final day] was a grass point right next to a spawning flat. Those fish just got through spawning, and there was a good mat of grass on a point, and I figured the shad would be spawning there. That spot has a lot of history. After being there for about 10 minutes, we started seeing some activity, and then it was like a light switch got turned on. We caught everything we had after that. It was awesome.”

A Berkley Dredger 14.5 (big money) was his crankbait of choice for the first two days. On the final day, Baty tossed a Z-Man Project Z ChatterBait with a 3.5-inch Berkley PowerBait The Deal trailer to catch 21 pounds, 3 ounces and nearly steal the win.

Clint Brown has grown up competing against the likes of Baty on Seminole and usually opts to leave Spring Creek to Baty’s devices. This time, however, it was one of the only places he found a good group of fish, so that’s where he called home.

“I was fishing coontail clumps, and it grows in the ponds off the channel in the deeper holes,” Brown says. “The fish I was catching were suspending around the coontail, so I was stroking that ChatterBait up off the bottom trying to hop it in front of one.”

Brown’s spot was really several clusters of coontail within a 200-yard area. Fishing anywhere from 10 to 12 feet of water, Brown used his electronics to a degree to make precise casts, but notes that the sun – and some wind – really helped.

“That coontail is dark under the water, and when the sun got up, I could see it better to make better casts right by it,” he says. “[Saturday], my area was real protected by that north wind, so it was slick calm and those fish would chase my bait and follow it. I had three knock slack in my line that I never caught. I didn’t have that happen the other two days, but after catching that [25-2 bag] on Day 2, I had to stay in the area.”

4. Clements Gets Neighborly with the Champ

Braxton Clements knew he was around some fish before the tournament, but he didn’t know just how good it’d be. Unbeknownst to him and Thliveros, the two would wind up fishing and working together the entire event despite never having met before.

Even though he fished next to Thliveros, the two had their own sweet spots. Grass was key for Clements, and he says the bite window had a limit.

“I fished the same spot all three days and they shutoff at 12 o’clock every day,” Clements says. “I caught everything before that every day. I had to make it count. If I lost a fish, it hurt me bad. I lost a 5 the first day and another 5 on the second day, but we recovered.

“I was just pitching a worm around deep grass and they were eating it in the deep spots, like 12 to 16 foot off the edge of the grass.”

Clements’ Texas rig consisted of a 1/4-ounce weight and a Zoom Ol’ Monster (junebug). Nothing fancy, but it certainly got the job done.

With this tournament being the first MLF event Clements has ever fished, he’s more than pleased with how it panned out.

“Being this is my first [Toyota Series] event, it’s awesome,” he says. “I really didn’t expect to make it this far. My goal was to make a Top 5. It’s a blessing. And my parents were on the water watching me all week, which was cool. Shoutout to them.”

5. Shad Spawn gets Cifuentes off to Fast Start

Starting the event off with a 23-pound, 8-ounce limit helped Tackle Warehouse Pro Circuit pro Joey Cifuentes get the ball rolling. Though he never stumbled back on the caliber of fish, a Top 10 is a heck of a way to wrap the Southern Division.

“I didn’t really know it, but I think my deal was a shad spawn in the grass,” Cifuentes says. “I started on that and it was offshore. I was running that with a ChatterBait, but my dad was catching a lot of fish in practice around scattered hydrilla dragging a worm. So, I had some different spots like that, which I would run after the morning bite died.”

Cifuentes believes the cooler weather that slid in for the final two mornings of the event ultimately hurt his shad spawn, but he still pieced things together with his secondary pattern.

Running around Spring Creek, Cifuentes threw a Z-Man/Evergreen ChatterBait Jack Hammer with a Berkley PowerBait The Deal trailer in the morning around the shad spawn. After that, he hit scattered grass in with a Berkley PowerBait Wind Up with a 1/4-ounce weight. He threw the worm on 20-pound-test Berkley Trilene 100% Fluorocarbon with a 7-foot, 3-inch, heavy Abu Garcia Fantasista Premier rod and Abu Garcia Revo STX reel.

Making his first Top 10, Brandon Classon churned out consistent performances over the first two days to make his way to Saturday. Like a good portion of the Top 10, he relied on one key spot in Spring Creek.

“I was catching them on a hydrilla point that dropped off with a bunch of timber in it,” Classon says. “They had been there since Monday, and the ones I did catch had some bloody tails, which told me they were coming out. I just stuck with the pattern. I did it all three days with one bait and it paid off.

“You had to make precise casts, and I’d venture off and let it rest, come back and catch one or two, then let it rest again. It got tough [Saturday] with no wind and rising water, but hey, I enjoyed it just to make a Top 10.”

His one bait was a Texas rig with a Zoom Ol’ Monster (candy bug) with a pegged 1/2-ounce weight.

His spot in Spring Creek consisted of two weed lines with a sand spot in the middle, which he could see on his electronics.

“I was just dragging around that bare spot,” Ellis says. “When I would see them swimming around the grass I’d have to throw my worm in there and pop it out and they’d eat it on the fall.

“My fish finally started moving out because of the pressure in the area and the conditions changed. I tried to check some other things out, but the water was too stained everywhere else.”

A Zoom Magnum UltraVibe Speed Worm (red bug) with a pegged 3/8-ounce weight accounted for the bulk of his fish. He also mixed in a 1/2-ounce Z-Man/Evergreen ChatterBait Jack Hammer to get more of a reaction bite.

“It was my first big tournament and I enjoyed it,” he says. “I’m looking forward to next year.”

Anthony Ford kept it simple for his performance on Seminole – throw one bait and cover water.

A 3/8-ounce Z-Man Original ChatterBait Elite with a swimbait trailer was about the only thing he threw the entire event, and it helped earn him another Top 10.

“I was fishing over some hydrilla on the edge of a channel in Spring Creek,” Ford says. “Of course, Thursday they were chewing it pretty good. Friday I had to slow down and pick up a worm and [Saturday] it just shut off.

“I fished one area, but it wasn’t small. There was plenty of room with patches of grass scattered along the channel.”

One of the only pros not fishing in Spring, Nicky Davico had a few different patterns going to catch his fish throughout the event.

“I was fortunate to find some fish in the main lake not too far and leave early in the day with 10 to 14 pounds off a shad spawn,” Davico says. “Then I’d go power fishing for one big ‘un. I had two sand spots that were kinda clear, but the mud had crept in on them and I knew they were done.

“I actually wound up fishing some backwaters I know they live in and caught a few good ones doing that too.”

10. Segraves Hangs Near the Flint

“I was ripping a ChatterBait over grass beds and letting it fall down in it and caught them pretty good early in the week on it,” Segraves says. “After that it just kind of quit on me. I had to catch them on a worm and jerkbait.

“I was in the Flint between there and Spring. I had one big grass bed I sat on, but once that died I had to go run around and find other stuff.”

A 1/2-ounce Z-Man/Evergreen ChatterBait Jack Hammer with a Reaction Innovations Skinny Dipper and a Megabass Vision 110 did most of the work for the Florida pro.

While his primary bite faded, he credits one bite for getting him into the Top 10.