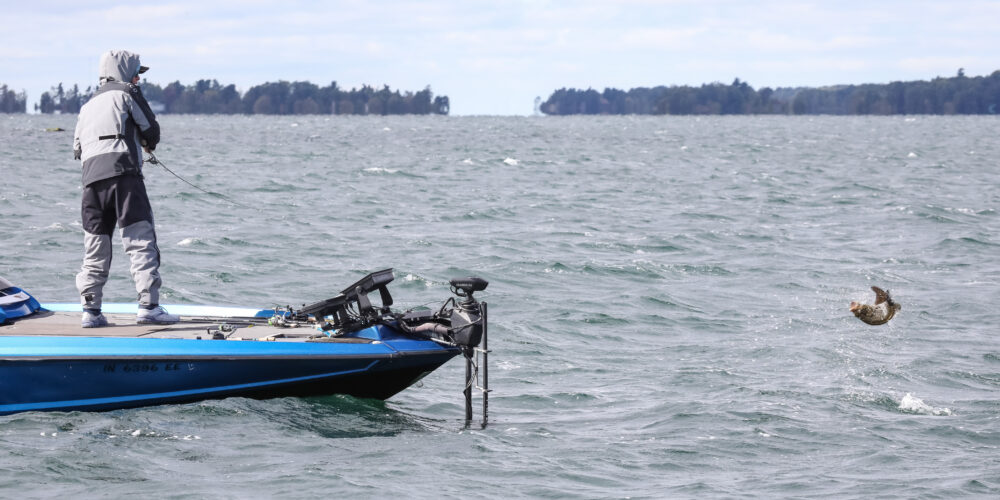 MASSENA, N.Y. – Rivers tend to be fickle beasts and so do smallmouth; hence, it was little surprise that the St. Lawrence River had highs and lows throughout the Toyota Series Presented by A.R.E. Northern Division finale.

Day 1 made for a record-setting pace, only for big winds to derail that on Day 2; and even when the conditions seemed perfect the final day, the smallmouth were less than cooperative.

Still, the top pros managed to stay consistent thanks to some prime areas and stubborn willpower. In the end, Spike Stoker‘s high-level consistency earned the win, and more than half the Top 10 broke the 60-pound mark behind him.

With 90 miles of river and tens of thousands of shoals to fish, anglers often had too many spots to hit in a given day or even the entire event. Not Todd Walters, though.

“I basically just stayed on one half-mile stretch most of the event,” Walters said. “And, it was only 8 miles from takeoff. It’s all I really had, but it worked.”

A big reason it worked, he admits, was sheer stubbornness.

While he had plenty more places to fish, he knew the right quality was there thanks to there being more current (1.5-2 mph) than many of the other stretches he fished. So, even when he was struggling to get bit on Day 2, he simply would just keep idling up and drifting again and again, in excess of 20 times a day.

No surprise, the morning drifts first thing were often his best; but he managed to stay steady using a Strike King Baby Z-Too or Z-Man Finesse ShadZ on a drop-shot with a 3/8- or 1/2-ounce weight depending on the wind.

“(The different lures) seemed to make a little bit of difference,” Walters said. “Everyone throws a Berkley PowerBait MaxScent Flat Worm; so I wanted something different.”

He may be from Texas, but Tommy Dickerson loves catching brown fish up north; so after finishing the Tackle Warehouse Pro Circuit season at Champlain, he stayed until this event to have some fun tossing a drop-shot around the Clayton, New York, area.

It turns out, neither the drop-shot nor the Clayton area ended up being the deal for him.

He found “one little old drift in Ogdensburg” that was 400 yards long and in 12-15 feet that was loaded with the right quality – which was great, as he said that being an older guy, he didn’t want to make the long run to Clayton. The problem was that on the first morning they wouldn’t eat his drop-shot.

“I decided to play with a Carolina rig a little bit, and they just started eating it like crazy,” Dickerson said.

Being from Texas, a Carolina rig is a way of life down there; and sure enough, Dickerson had some key tricks with it to find success.

Despite fishing relatively shallow, he used a 1 ½-ounce weight and 12-pound-test for both his main line and leader; and on the business end he had a Zoom UltraVibe Speed Craw. Dickerson said the trick was a small hook – he used a 1/0 hook, which was lighter and would float above the rocks instead of getting hung up in them.

Of course, with that big of a weight he still got hung up plenty, and that was the point.

“You’d just be drifting and dragging it, boom, boom, boom against those rocks,” Dickerson said. “Then it would just stop and you didn’t know if it was a rock or a fish until your rod started shaking, so you know it’s not a rock. It was pretty cool how they’d load up on that thing.”

For almost any other angler, fourth place is a great finish. But, for Cory Johnston on the St. Lawrence River, it’s a massive disappointment; especially after what happened on Day 1.

“If I’d have caught everything I hooked on Day 1, it would’ve been my biggest bag ever on this river,” Johnston said. “I weighed in a 1.48 bass and still had 22 pounds; and I lost eight fish that day, with four being over 5 pounds. It was one of those days where nothing went right.”

While a handful of anglers made the long run to “the line” where Lake Ontario meets the river, Johnston was the only one to find consistent success there. To do so, he had a “mix mash” of deep and shallow fish, and he says he ran it all with 20 rods on his deck.

“Drop-shot, tube, jerkbait, Carolina rig – you name it, I threw it,” Johnston said. “The drop-shot with the SPRO CJ Smasher was my main bait, though.”

That versatility and constant adjusting allowed him to survive Day 2 and then make a significant rally on the final day – but ultimately, it wasn’t enough to take home what he really coveted.

“I’m not happy unless I win out here,” Johnston said. “I don’t say that to be arrogant or cocky. It’s just the way it is. Anything less is disappointing.”

He didn’t want to throw it, but Cody Petit felt it was his best chance to win; which is why a tube was tied on for the majority of the tournament for him.

“I honestly came in hoping not to throw it,” Petit said. “It just gets hung a lot. I mean, I went through about 100 tubes, but they were just chewing it.”

Fishing channel ledges with small humps on them, Petit would simply drag his ½-ounce Berkley PowerBait MaxScent Tube along the bottom. No lifting-and-dropping. No snapping. Just dragging it, and it worked all week, especially when he combined it with a drop-shot with a 3/8-ounce WOO! Tungsten drop-shot weight.

“So many times, I’d burn the tube back to the boat for another cast, and fish would rise off the bottom with it,” Petit said. “So, I’d drop it back down and see if they’d eat it. Every day though, I’d catch one key fish on that drop-shot as a follow-up.”

Being a guide on the St. Lawrence River, Brent Anderson is used to putting people in his boat on fish. Sure enough, he did that plenty this week, as his co-anglers often had some of the best bags each day, including the Day 1-leading bag.

The problem is he just didn’t catch enough for himself on the final day to hang on to his lead.

“It’s disappointing,” Anderson said. “A week ago, we were catching 25 pounds a day in my boat. Then this week, it was just tough. The fish stopped doing what they were supposed to be doing, especially the final day. I don’t know what they were doing.”

Every day Anderson would start on a spot in Ogdensburg that would clue him in on the mood of the fish. If it was good, he’d “roll the dice” and run further down to Brockville, Ontario, where he felt there was better quality. If they were stingy, he’d stay up.

On the final day, his Ogdensburg fish told him the bite was off, but he admits he couldn’t resist the temptation of catching a big bag. The problem was that the fish didn’t cooperate (outside of yet another 6-pounder caught by his co-angler), and he fell from first to sixth.

7. Meyers Grinds out Bites Near Clayton

Having only been to the river one time prior, Elijah Meyers decided to spend a month up here to learn as much as he could. The result was tons of spots on the Canadian side near Clayton that were loaded with fish. Getting them to bite, though, was a different story.

“I had lots of spots, but I just had a hard time getting the fish to bite,” Meyers said.

The young pro alternated between a 3/8-ounce Ned rig with a Z-Man TRD and a locally made Bite Me Tackle Tube on a ½-ounce head, and he’d throw them on current breaks in the main river.

While the bulk of his weight was caught 80 miles from takeoff, he had a key spot near weigh-in that played a pivotal role.

“I had one spot 7 miles from Massena that I stopped on every day on my way back in that produced a 4-pounder,” Meyers said. “Unfortunately, it was only good for one fish each time.”

There are countless rocks underneath the waters of the St. Lawrence River. For Wayne Vaughan, though, he wanted the “clean” ones.

“I was fishing between Chippewa Bay and Clayton because that’s where I found the most of the right rock with clean spots out deep,” Vaughan said. “Once I figured it out, I could see on my electronics these clean sand spots in the rocks, and those were key.”

The 2019 Toyota Series winner here also said having some sparse grass near those clean spots, particularly on his shallower spots, made them extra juicy.

As for techniques, he threw a drop-shot, jig, Carolina rig and jerkbait at them, with a Berkley PowerBait MaxScent Flat Worm being his biggest player.

9. No Practice, No Problem for Hatfield

Having just been here a month ago, Nick Hatfield saw no reason to worry about practice. He’d just go where he nearly won the Tackle Warehouse TITLE again. The problem was that after working some extra days and only practicing one, what he found was not to his liking where he’d fished before.

“I just committed to fish new stuff each day near Massena to give myself extra time every day,” Hatfield said.

Obviously, it worked out, as he ran around hitting as many spots as he could with a Ned rig and drop-shot. For the Ned, he used an Angler Tungsten head and Berkley PowerBait MaxScent Lil’ General, and on the drop-shot, it was a Berkley PowerBait MaxScent Flat Worm on a 2/0 Hayabusa FPP Straight hook above a 3/8-ounce Angler Tungsten drop-shot weight. Both were thrown on Doomsday Tackle rods.

“The biggest thing for me was hitting new stuff each day,” Hatfield said. “The third day, I tried running stuff I’d hit the days before and never really got bit.”

Tristan McCormick had every intention of fishing deep; then practice pointed him in a different direction.

“I started deep and knew something wasn’t right,” McCormick said. “I couldn’t figure out the drift bite. So, I went shallow, and on the first shallow shoal there were 20 of them on it, and they were the right ones.”

Fishing near Brockville, Ontario, he ended up finding plenty more of these 10-15-foot bars; too many to hit, he said. But best of all, he got to fish them with a fun one-two punch of a Carolina rig and a drop-shot.

The rig was the main player, as he used a ¾-ounce weight and 2-foot leader with a Strike King Rage Bug.

“They were glued to the bottom, which is where the Carolina rig came into play,” McCormick said. “That stayed down with them.

“But, often when I’d catch a fish on it, there’d be ones with it as I reeled it in. So, I’d drop a drop-shot with a Strike King Baby Z-Too to them. It was awesome.”

For both baits, McCormick said he dipped the tails in chartreuse dye to help them stand out a little more.