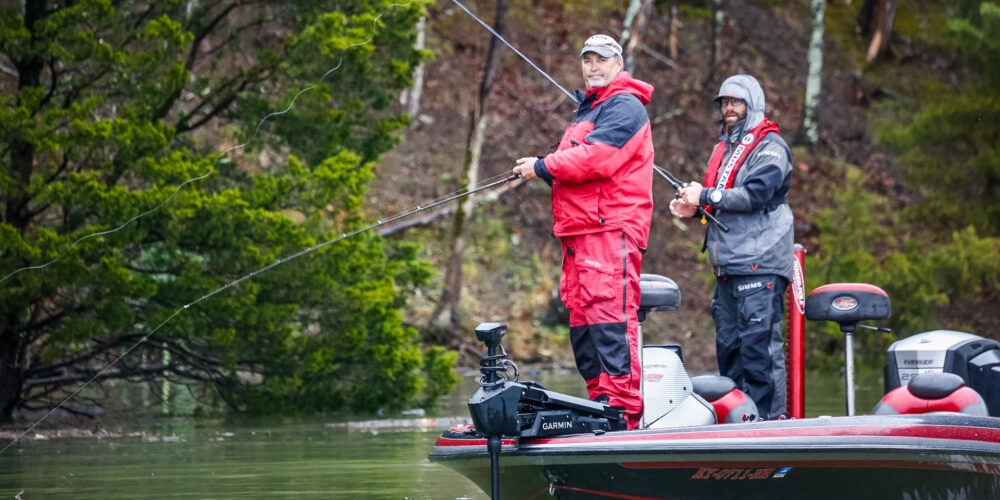 As tough as it can be to adjust to a 7-foot rise in water level in the few days leading up to a tournament, Dale Hollow sure showed out on Day 1 of the second Toyota Series presented by A.R.E. Central Division event of the 2021 season, highlighted by a massive 23-pound, 15-ounce bag from 2020 winner at Dale Hollow, Adam Wagner.

Behind him, the Central Division presented by Neat Companies anglers went to work to the tune of 10 additional bags over 15 pounds and 41 total pros weighing at least double digits.

While the rain and falling temperatures made the day generally miserable for most, it did the opposite for the bite. Here’s a look at how the rest of the top five pros caught their fish on Day 1.

Coming off a Top 10 at Guntersville last month in which he had to make some major adjustments throughout the event, Mickey Beck was again faced with a similar situation at the onset of this tournament. Beck fished the Phoenix Bass Fishing League tournament on Dale Hollow on March 20 (finishing 22nd) – amidst drastically different conditions.

“I was getting bit on an A-rig and the water came up and it killed [that bite],” he says. “I knew these fish were going to have to eat or go on beds and I couldn’t flip them.”

As a result, Beck says he has a “special technique” that he’s choosing to remain tight-lipped about, at least until tomorrow.

Whatever that technique is, he’s employing it in the mid-lake area in sections with dingy water (“chocolate milk is a no-go – dinge is a whole lot better,” he says). The result: a bag full of healthy 4-pound largemouth.

Beck leaned on forward-facing sonar to get the job done on Wednesday. He’ll do the same Thursday, both eyes glued on his electronics but with the weather conditions in his peripheral vision.

“If the sun comes out tomorrow it’ll be a different bite,” he says. “If that high blue comes out, I’ll be running and chasing like I did at Guntersville, and it didn’t happen at Guntersville in post-front conditions.”

For Derek Remitz, weighing in 18-12 on Day 1 was all about discipline.

“I’ve done this long enough to know when not to push where I think I’m going to catch them,” he says. “I scrapped [my plan]. It doesn’t always work like that, but I got a few bites and it keyed me in.”

After riding around doing some running and gunning all morning, Remitz decided to make a move to an area at the lower end of the lake where he’d caught some fish before the water came up. There, he found himself in an area loaded with quality smallmouth – at least one of which was over the 21-inch slot limit that added 5-plus pounds to his bag.

Remitz says the fish are pretty scattered from the rising water – not fully in the grass and not fully on the bank – but he’s pretty confident in his pattern, which is predicated on a few key areas with the right type of rock.

While he did catch one keeper flipping shallow cover, he ended up culling that fish in favor of a bunch he caught with moving baits out a little deeper.

“I think with what I’m doing, the cold might set them back a bit, but the sun won’t hurt,” he says.

While some anglers shied away from muddy water on Day 1, Billy Hall actually preferred it to put together his 17-6 bag.

“Dirty water was fine for me,” he says. “I got to clear water and didn’t do any good.”

He found dirty water in gravel pockets where he thinks fish are moving up to spawn, going to work with moving baits (primarily a jerkbait) and one flipping and pitching bait. More than anything, the key for Hall so far has been finding the bait.

“It was hit one spot and if you get bit, great, but if the bait wasn’t there the fish weren’t there,” he explains. “As long as the bait stays there (tomorrow) the fish shouldn’t go anywhere. If the bait leaves, that could change it up.”

Of the anglers on-the-water reporters found on Wednesday, none got off to as hot a start at Steve Whitaker, who had about 15 pounds by 11 o’clock and culled just once after that, noting that he also broke off a fish that he wasn’t sure would help.

At the time, Whitaker was throwing a spinnerbait up in flooded bushes, but he also mixed in some flipping baits throughout the day and expects to be in different areas tomorrow than the ones he ran on Day 1.

While Whitaker doesn’t have specific areas he likes, he does have a couple key preferences.

“I wanted a little off-color water,” he explains. “I didn’t want the mud. That’s where the bigger fish were. I caught them in the muddy water, too, but just not as many.”

In addition, Whitaker is focusing his attention not on points or the backs of cuts but somewhere in between.

“They’re not all the way back – from the mouth, just a quarter of the way back,” he says. “You won’t see me in the same places tomorrow.”