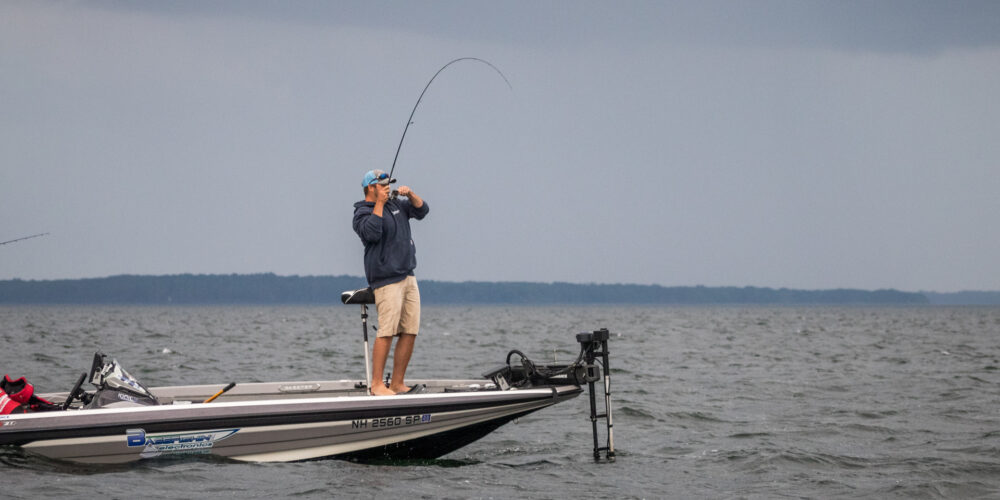 While the first day of the event saw some scattered success down south near Ticonderoga (Ti), the north end reasserted itself on Day 2 of the Toyota Series Presented by A.R.E. Northern Division event on Lake Champlain. Today, the entire Top 10 has one day at Ti between them, and smallmouth are by far the dominant species. As is usually the case on Champlain, weights are wicked tight with less than 1 pound between first and fourth, which should help to keep the heat on tournament leader Bryan Thrift.

Weighing back-to-back 19-pound bags of smallmouth to move from fourth to second, Stephen Estes is pretty much on fire.

“I’ve been doing the same thing, just chasing bait around, chasing individual fish with the Lowrance ActiveTarget and casting at them with the drop-shot,” Estes says. “That’s really the name of the game for me.”

Essentially fishing in the middle of nowhere, it’s unlikely in the extreme that Estes would be catching these fish a few years ago. Forward-facing sonar and a couple great areas have him right with Thrift and catching more than 40 fish a day, though.

Though Estes has caught a ton of fish, he’s yet to break the 20-pound mark. To make a run at the win, he may need to.

“I feel like it’s got plenty left. I moved to a different area this afternoon and culled twice,” he says. “I don’t have a shortage of fish; it’s just about getting the right size in the boat. I do have largemouth stuff I haven’t touched. I’m sure it’s been hammered by the other anglers, but I’m definitely going to mix that in tomorrow and try to go for the win.”

The wild card in the top five, Bryan Labelle, had a long day of fishing on Day 1 and says he used it to run to Ti. Today, with a much shorter day, the Vermont pro stayed north for a somewhat surprising mixed bag.

“I had a short day, and I didn’t have enough down there for two days,” Labelle says of his decision to stick north. “I hadn’t spent much time up here. I don’t like the grass. It’s good, but there’s a lot of other grass that has grown up in the milfoil; it’s real dense, and they don’t like it for sure.

“I flipped two smallmouth in like 5 feet of water today,” Labelle adds. “It was in a little grass bed that I haven’t caught a smallmouth in ever. It’s a small little strip and I caught two smallies out of it. They changed the whole bag for sure.”

Fishing hard cover and grass, Labelle still caught mostly largemouth on Day 2, and he’s tentatively planning on going for the gusto with another run to Ti.

With the biggest day of anyone in the top five, Matt Becker put 20 pounds on the scale and could be scary on the final day.

“It’s been interesting for sure. It’s been a ‘what if?’ basically,” says Becker. “I figure I would have gained another pound and a half with fish I’ve lost. That hurts here. It’s hard to make that up.”

Taking a page out of the playbook Austin Felix ran in the recent Elite Series event, Becker is cranking his Mercury a lot.

“I’ve been running around like a wild man fishing smallmouth,” Becker says. “Today, I had some sneaky stuff I was trying to save for Day 3, but I needed to go burn ‘em today to make Day 3. It’s a lot of moored boats and buoys and boulders, Felix style – he may or may not have told me to do it. Fishing anything isolated is the deal, on a boulder or something on a flat, there will be anywhere from three to 10 smallmouth on it, but very few big ones. I think I’ve burnt up a lot of the 4-pounders.”

For baits, Becker has mostly worked with a shallow trio of a homemade marabou jig, a spy bait and a wacky-rigged 4-inch Googan Baits Lunker Log. Though he weighed all smallmouth on Day 1, he mixed in two largemouth on Day 2.

The second local in the top five, JJ Judd had a mixed bag on Day 1 and put together 18 pounds of smallmouth on Day 2.

“Yesterday, I made it work after having a tough morning – I really was tested,” he says. “Today, I started in the same spot – a community hole – and all I’m doing is driving around on my trolling motor looking for individual fish with my LiveScope. The key is to stay far enough away from them. When you get over top of them they’re harder to catch. If you can spot them on LiveScope 50 or 60 feet away and make a nice long cast and watch your bait fall at the fish, then I can get them to bite.

“I ran new water, some of my history stuff, a boulder here and a boulder there, and I picked a couple good ones up,” Judd explains. “Once that west wind came up, I went back to a deal I found in practice and culled three times.”

A Champlain veteran, Judd has a ton of experience on the lake and knows how tough it will be to move from fifth to first. With the situation he’s in now, he’s not planning on doing anything too wild.

“If I had some largemouth, it would excite me to win, because then you can catch a 5 or a 6 it makes a difference,” he says. “But I think I’m going to try to stay consistent and maybe catch a 19-pound bag and hope someone slips. I don’t think Estes is going to slip because he’s found a pile of fish and knows how to use his ActiveTarget. And Thrift is a freak of nature, so it’s going to be hard. I really don’t have a plan to where I could catch some giant largemouth, so I might as well stay consistent instead of going for the swing and ending up in 10th.”