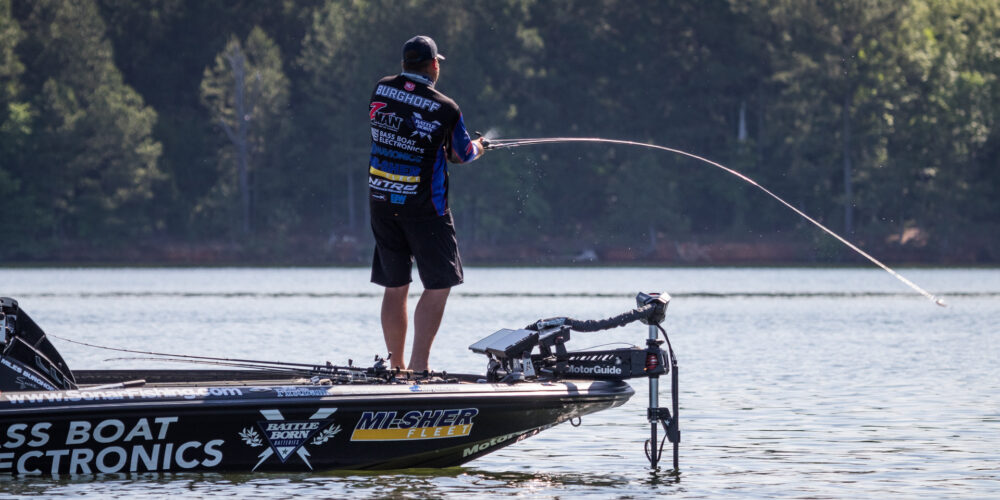 The story on Day 1 of the  Toyota Series Presented by A.R.E. event on Lake Chickamauga was how tough the ledge fishing is. Looking down the standings, you can spot plenty of accomplished offshore anglers that didn’t make hay on the ledges, with very few who did. Moreover, Jordan Hartman leads with just 20 pounds, which is respectable and hard to come by on Chick right now, but not what you’d expect for mid-May on one of the best lakes on the Tennessee River.

With little current flowing during the day and perhaps only slightly more running in the afternoon and evenings, you might think the shallow bite would be on fire. That’s somewhat the case, but the shallow slugfest that could be on the table hasn’t appeared. In fact, most of the folks fishing shallow don’t seem confident at all in their ability to catch them shallow again.

So, if Hartman can keep catching quality offshore on Day 2, he may be able to get out to a big lead. But, the pros behind him are very accomplished, and it is Chickamauga – a day-changing 8-pounder is only a cast away.

Here’s how the top anglers are catching their fish.

Putting together a mixed bag of shallow and deep fish for second place, Miles Burghoff might be in the process of adding another good finish to his ledger as one of the newest Chickamauga locals.

“I started on a bed with what I thought was a 4 and a 6,” says Burghoff. “I started on that bed, and I couldn’t see it in the shade, and they didn’t look catchable, and I didn’t know if both of them were still there. So, I ended up leaving there, ran some shallow stuff, didn’t do any good, and I ended up hitting one of the ledges.”

Limiting on one ledge, Burghoff could only catch fish on reaction baits, and says that they very much weren’t eating. So, after a while, he took another crack at his bedding fish.

“I had to make some adjustments to get them to bite, because they were acting really weird,” says Burghoff. “I caught the first one, which was close to 5. Then, after fishing a bit to get the 6 to go, I honestly was about to leave. But then I made one more change, dropped it right on her nose and she ate it.”

Dropping a Z-Man Boar HogZ on her, Burghoff put himself into the top five. With a little weight added flipping the Boar HogZ and a wacky rig, he ended up with a day that looked really good.

“I’ll probably start offshore and fish some ledge stuff, but I’ll have to fish a bunch of new water,” says Burghoff of Day 2. “If I can’t get them to trigger out on those ledges, I don’t know if I can catch a limit.”

A young angler who Brent Anderson says is in the same class as Cole Floyd, Sloan Pennington caught 19-2 before coming in early with livewell trouble. Because of that, we haven’t been able to track him down for an interview – if we can, rest assured that his pattern details will be added here.

Going all-in on the offshore bite, Dakota Ebare started off well and is in position for yet another good finish in MLF competition.

“It just worked out really good,” says Ebare. “For my first spot, I actually passed up some places I thought I should have stopped on. But, I had one area I thought I could have to myself. It was a school that wasn’t a secret, but it hadn’t gotten the pressure of the others. So, I went on there, because I thought I could catch a solid limit there.”

A few hours later, he had 16 pounds in the boat and had the freedom to roam.

“It wasn’t hot and heavy, but it was a good morning,” says Ebare. “That allowed me to free up and move around. I was really discouraged. There were some really good areas I got on that were busted up, and the south wind was backing things up, which is just a nightmare.”

Eventually, Ebare rolled onto one offshore spot and caught a 5-pounder to cull, but even his later success hasn’t convinced him that offshore is the only way to go.

“That spot has got some potential; it’s a little sneaky situation going on there,” says Ebare. “But, I may have to implement some shallow game tomorrow, offshore was bad this afternoon, and the few schools that are there got the [snot] beat out of them this morning.”

The sole angler in the top five with a totally shallow game plan, Jeff Dyer didn’t have much of a plan on Day 1, but it worked out pretty well.

“I got six bites, I culled my last fish as my alarm was going off to come in,” says Dyer. “My two big ones, I caught in four casts. I caught one, made two casts and then caught the other one. It was a little bit depressing the rest of the day.”

Fishing north of takeoff, Dyer has a chance based on history, but doesn’t seem wily confident about it.

“I don’t have a clue if I can catch one fish tomorrow,” says Dyer. “One of them I found on the bed, I caught that, but the rest of them I caught where I had never fished before. So, I’m not really looking forward to tomorrow. But, I’m tickled to death and I’m gonna give it hell tomorrow.”