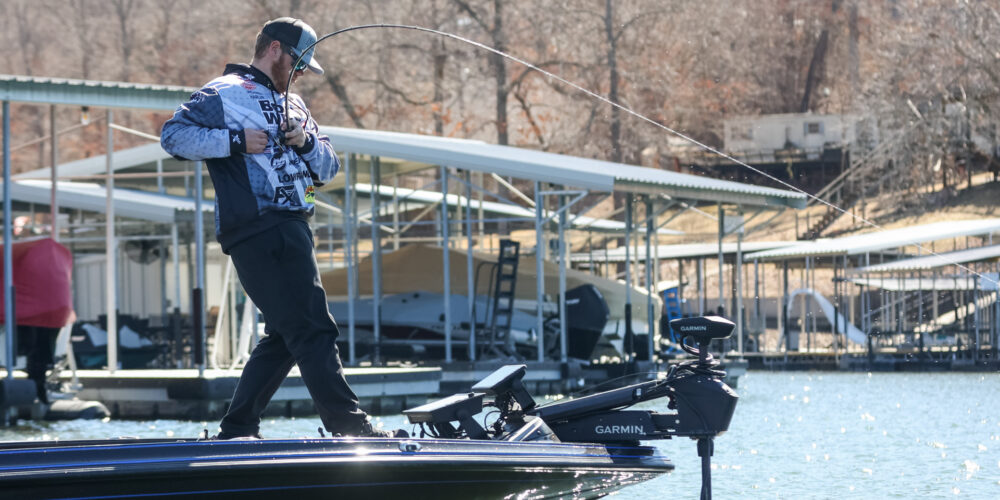 OSAGE BEACH, Mo. – Lake of the Ozarks may not have produced any major fireworks on Day 1 of the Toyota Series Presented by A.R.E. event, which is presented by Smart Digital, but it did set the stage for a shootout the rest of the week.

Tight weights and quality fish headlined the season-opener of the Plains Division Presented by Outlaw Ordnance. Just 4 pounds, 9 ounces separating leader Justin Miller from 10th-place pro Nicky Parsons, and there’s a pile of local hammers in the mix, which means there’s plenty of room for the leaderboard to shuffle by Championship Thursday.

Here’s a look at some of the top pros who got off on the right foot on Day 1.

Right on the heels of Miller, Brock Reinkemeyer is doing exactly what you should be doing to catch 20-plus-pounds on Lake of the Ozarks this time of year, but so are a lot of other anglers.

“I’m catching them out deep on structure,” said Reinkemeyer. “I’m throwing an A-rig and a jerkbait all day and just switching back and forth.

“I just covered a ton of water. But I think there’s so many guys doing the same thing that it’s scattering the fish. They get grouped up, but once somebody fishes them, they know the boat is there and it blows them out and they start wondering.”

Covering water and running spots not only helps Reinkemeyer evade some pressure, but it also helps get him in the right timing with certain areas, which is a big deal on this lake.

“A lot of it is timing and pulling up when they want to eat because there are a lot of fish down there that don’t want to do nothing,” Reinkemeyer added. “I like fishing for them when they’re in a group of two, three, four, maybe 10. That’s what I look for.

“I’m going to run some new water tomorrow and start on where I got the most bites, and if they’re not there, I’m not giving them very much time. I think I needed to slow down a little more today and I could have caught more, but I left them for tomorrow.”

After winning a Phoenix Bass Fishing League Wild Card event on Lake of the Ozarks in the fall of 2020, Austin Culbertson is looking to add some more hardware to his collection thanks to a solid start to the week.

Culbertson knows the Osage River impoundment well, spending much of the winter fishing a local tournament trail, so coming into this event he felt pretty confident about what he had going.

“I thought I’d be mad if I didn’t have 18 (pounds) a day coming into this event,” said Culbertson. “I think the big fish are biting, and it’s tough, but if you figure it out, at least practice was pretty simple.

Even though Culbertson had to lean heavily on his water, he actually wound up catching them from a lot of newer places he found today while fishing.

“I had an 11-pound limit by noon, and I knew I had to make a change,” Culbertson said. “I decided to start looking around and knew the fish couldn’t have gone 100 miles away, so I started looking for brush piles or rocks nearby where they had been and that’s when I started to catch them again.”

Fishing a 15-mile stretch of the lake, Culbertson is looking to re-tap a lot of his spots again tomorrow. But given his experience on the lake and what he learned today, he’s certainly one to watch moving forward.

If the name Michael Harlin rings a bell, it’s probably because he’s the defending Lake of the Ozarks champion, and he’s picking up right where he left off.

“I hit probably 15 or 20 spots, which is actually less than I was planning on,” said Harlin. “I fished a lot of stuff today that has a lot to fish in the area, so I didn’t have to pull the trolling motor up and leave. I started on a lot of the stuff I fished last year anticipating it was going to get a lot of pressure, which was true.

“I had to pull the plug and move around a little bit since they wouldn’t cooperate there and I was able to get on some fish.”

While pressure may have something to do with the funky bite, Harlin believes it’s also just par for the course given the time of year. Stable weather this week should help the bite get better and fine-tuning his timing might be the key to Harling going back-to-back.

“We’re just in a transition time and the fish are changing a lot,” Harlin said. “[The lake] isn’t fishing good. It’s tough to get bit and you can just tell the fish don’t want to bite, but I think they’re settling in with this warmer weather.

“I’d say I reeled by bait in front of 20 pounds today, but you can’t get them to commit. I’m still going to run the same pattern and check a lot of those same areas. Like last year, I had to keep revisiting them to get them to fire and eventually they would. It’s a matter of being there at the right time and not screwing it up when you get the chance.”

Josh Shirley has had a rocky relationship with Lake of the Ozarks over the years, despite his only Top 10 with MLF coming from here back in 2017 as a Strike King co-angler. But he’s looking to change that this week thanks to an 18-pound limit that has him sitting in fifth after the first day.

Things didn’t start off that well in practice, but sometimes a little reset can help get the wheels back on track.

“I’ll tell you that I didn’t catch but four fish total in practice,” said Shirley. “My neighbor where I’m staying has been begging me for some crappie because I’ve been catching them every day, so yesterday I went crappie fishing to get him some and absolutely wrecked them. I got my head straight and got back to fishing today and had a really good day.”

Opting to hunker down in one area to maximize fishing time, Shirley feels confident that he can get back on some more quality tomorrow.

“I’m using [Garmin] LiveScope like everybody else and a lot of fish that I saw didn’t bite,” said Shirley. “It’s hard to get them to bite, but I caught a bunch of fish today and hope I didn’t catch too many. I do have some other areas that I think I can go to get bit, but hopefully, I won’t need them.

“I was due to have a good day here and hopefully tomorrow will work, too.”