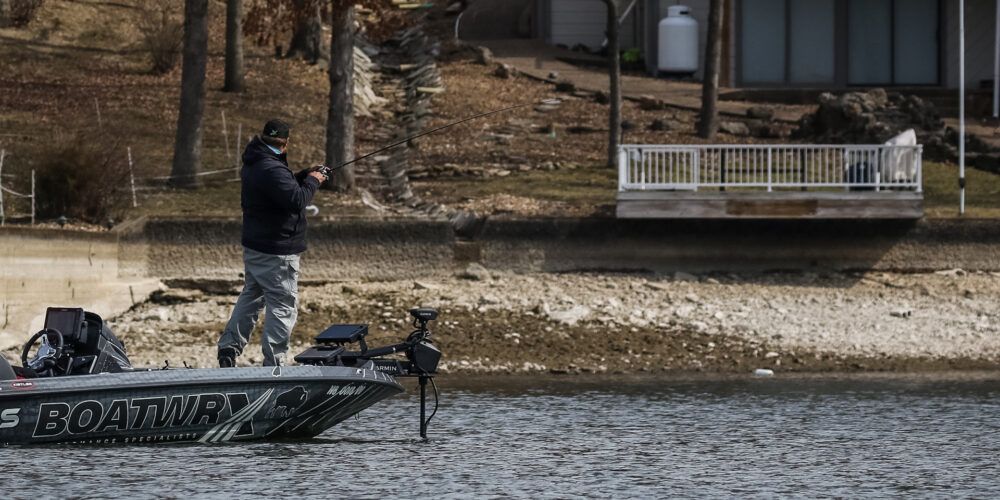 The kickoff to the 2021 Toyota Series presented by A.R.E. Plains Division on Lake of the Ozarks, presented by Fenwick, has proved the adage that even under tough conditions, some anglers will figure them out.

Michael Harlin has a commanding lead with 41 pounds, 11 ounces, second through fifth are separated by just 5 ounces, and all have over 30 pounds.

Andy Newcomb of nearby Camdenton finished fourth in the Lake of the Ozarks event last year and he’s looking to better that this time around. He’s brought in two consistent bags (14-9 and 15-14) with the help of an Alabama rig.

“I’ve been able to catch a lot of fish each day, but I’m having trouble finding the bigger ones,” he says. “Each day, I have caught about a dozen fish just slinging that rig. I can’t seem to relocate the bigger ones I found in practice.”

He’s targeting multiple depth ranges and will go back and do it again tomorrow.

“They are all over the place, and I have caught them in 8 feet of water and in 28 feet,” says Newcomb. “I feel like I can catch what I have been catching and maybe I’ll luck into a few big ones.”

Eric Olliverson of Lampe, Missouri, is bucking the trend of the Alabama rig, jerkbait fest and finesse baits. He’s also one of the few remaining who is fishing in the Niangua River.

Yesterday he brought in just three bass – though solid for 11-10 – and today he hauled five for 18-9 to the scale.

“I found those fish yesterday in the afternoon with about two hours left in the day,” he says. “The area is key, but it is really bait specific. I’m going super, super finesse.”

He didn’t disclose much more but says fishing very shallow was a key to his success.

“It has been so crowded up in the river, and I have a lot of confidence with what I am doing,” he says. “I have been able to fish behind others because I’m doing something different.”

Throwing an Alabama rig and a jerkbait, Brad Jelinek has been keying on the area near the mouth of the Gravois.

“I’m catching the shallower fish on a jerkbait and fishing the Alabama rig in deeper water,” he says. “The morning seems to be slower for me, and I am targeting the 20- to 25-foot range with the rig. Later in the day, I’m fishing the 8- to 15-feet zone with a jerkbait.”

The key so far has been weeding through fish to accumulate his final total.

“There are 10-inchers with 3-pounders mixed in,” he says. “I’m fishing the same general area as Harlin, but he seems to be on all of the bigger ones. I know I’ll need a giant bag to have a chance to catch him.”

Shonn Goodwin has eight wins with Major League Fishing, including the Phoenix Bass Fishing League All-American and a 2015 BFL win here on Lake of the Ozarks.

After two bags in the teens, he sits in fifth place by targeting shad-focused bass.

“I’m fishing a jerkbait and an Alabama rig under balls of shad,” he says. “That’s all I’m doing all day.”

The area he is focusing on ranges from the launch ramp at Public Beach #2 to the dam.

“I only caught five fish yesterday but had a couple of limits worth today,” says Goodwin. “I caught a bunch of 2-pounders late and that makes me feel better about tomorrow and how they’ll bite.”