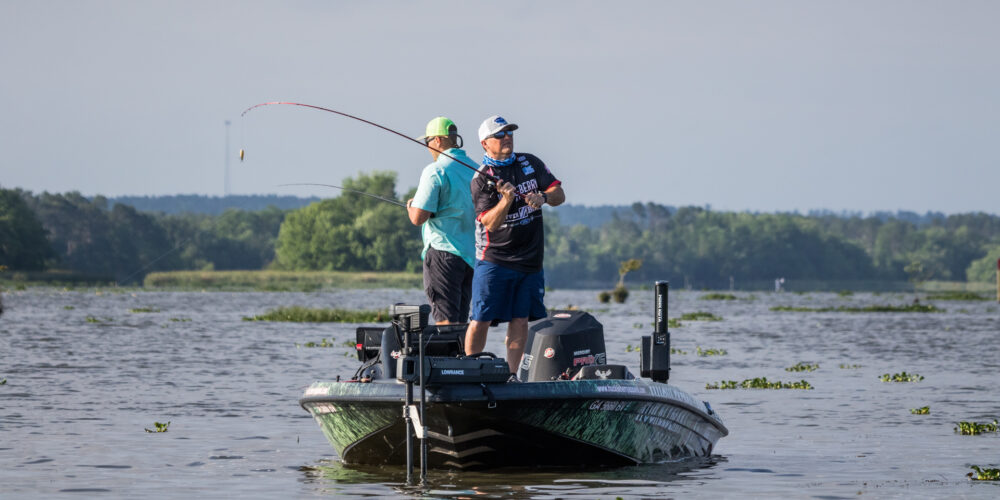 From fish in various stages of the spawn and on a shad spawn pattern, there’s a lot going happening on Lake Seminole right now for the Toyota Series Presented by A.R.E. Southern Division event. While there isn’t one clear pattern or technique shining through at the moment, the top pros are fairly dialed considering they all bested 21 pounds.

In the lead, DJ Ellis leaned on local knowledge of Seminole and camped on one spot all day for his 25-pound, 15-ounce leading limit. Meanwhile, the rest of the top pros are doing a bit of moving and grooving with the common denominator being small flurries of action to capitalize on.

Here’s a look at how the rest of the top five pros got off to a solid start on Seminole.

Despite having a solid Day 1, Anthony Ford wasn’t too sure how things would go after a tough practice.

“It was extremely tough in practice,” Ford says. “We had a hard time in that dirty water. We just couldn’t get bit. Couldn’t get any information from the fish as to what they were doing. But finally yesterday afternoon I caught a few that told me what I need to know.”

Catching fish fairly consistently throughout the day, Ford stuck to one general area all day, rotating from sweet spot to sweet spot.

“I’m not necessarily targeting postspawn fish, but a lot of my fish are skinny,” says Ford. “I assume they’re postspawn.”

Like Ellis, Ford is also utilizing some past experience to get him around fish, especially after a tough practice.

“I kept going back to an area in practice in hopes that they’d be there and finally they showed up,” he says.

With one Toyota Series win on Seminole under his belt from 2018, Matt “Boot” Baty would love to have another title on a fishery in his backyard. Being just the third angler to crack the 23-pound mark, he’s off to a good start, though that’s not how his day started.

“I love when Spring Creek gets muddy, I love it, I absolutely love it,” Baty says. “And when it gets a lot of current in it, I feel confident. I’ve about six places where the current feeds into little grass places that I like to fish and I hit like three of them this morning without a bite. I was getting a little worried. Eventually, I pulled up to a place and caught ‘em.

“It was not easy for me today. The first bite I had was a 7 and he pulled off. Then I caught three big ones in a row and then they kind of slowed down. I had to finesse them to get a few more after that.”

Noting the current was slower today than it had been in practice, Baty made some adjustments before getting his timing right to pull up on a spot and get right in a hurry. If the current picks up tomorrow, he’s hopeful for a faster start.

“What happens when the rivers are running hard and the lake is filling up is it backs [Spring Creek] up,” he says. “The bites not as good when it backs up, but when they drop the water it picks up because there is more current.”

Unsure what tomorrow will bring, Baty is lucky in the sense that he has forgotten more about Seminole than most in the field ever will. Because of that, he’s got some other patterns to check if his magic spot doesn’t produce.

“My primary pattern is cranking deep and throwing a [vibrating jig] some, but I’ve got a backup plan,” he says. “I don’t think the fish are as big, but I got a plan to run sand. A lot of times when it gets muddy these fish will go back to sand bars and just feed because they feel safe up there. I’m hoping I don’t have to use them at all, but it will start getting tougher. I guess the easy fish bit today.”

Tackle Warehouse Pro Circuit pro Joey Cifuentes has had a slow start to 2021. He’s hoping this week is when he turns things around.

“I pulled up on a few places in practice and caught some good fish,” Cifuentes says. “I didn’t know how many fish were there, but I only hit one spot today and I have multiples that were good.

“The spot I pulled up to this morning I think there was a shad spawn on,” he says. “It was a little bit offshore, but from what I hear they do spawn out there a little bit. So, I caught my fish really fast and then when it slowed down I caught my bigger fish on a worm. There’s a big wad of fish there that are postspawn and feeding.”

Looking ahead to tomorrow, Cifuentes doesn’t plan to change much, and being that he didn’t see much pressure around him he’s hopeful to make it happen again.

“I’m not going to change it up,” he says. “I’m going to that same place starting out because it was good and they were eating and then I’ll expand if it doesn’t pan out.”

Fishing a single-day event on Seminole some 15 years ago doesn’t necessarily qualify Lance Oligschlaeger as having past experience. Then again, maybe that is a good thing as he sacked over 21 pounds to sit in fifth.

“It was a super tough practice,” Oligschlaeger says. “I think the fish are starting to group up. I was looking up shallow early in the week and there were tons and tons of beds, but they were empty and clean. It made me think they were all fresh beds from a recent spawn, so since I couldn’t find them up shallow I looked out deep.

“I found a few really big schools once I started doing that. Today, I caught them all pretty quick.”

Oligschlaeger’s morning flurry wound up lasting close to two hours with hardly another boat trying to move in on the school. After leaving to check some other stuff, Oligschlaeger fished the rest of the day without ever coming across another bite window.

He’s hoping lightning can strike twice tomorrow and get him into another Top 10 cut and keep him in contention for his second Toyota Series win.