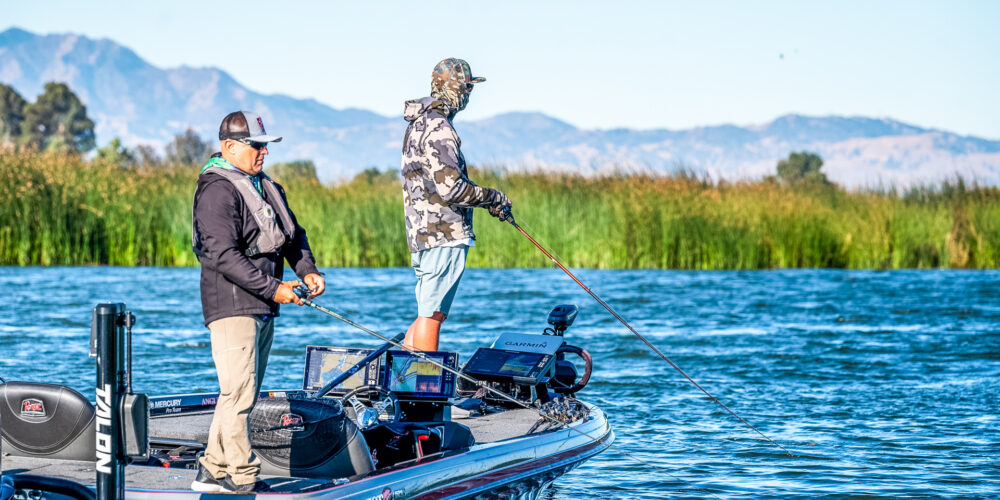 The Toyota Series Presented by A.R.E. Western Division event on the California Delta started strong, with many anglers hoisting solid bags and remaining in the hunt for Championship Thursday. A few key players pulled away from the pack, targeting a tough transition bite on this tidal fishery.

Local angler William Hume took the lead, with a last-minute 7-pounder helping him put 21 pounds, 4 ounces on the scale.  Covering as much water as possible was key, with topwater, moving baits, and punching all playing a part in Hume’s success.

A state-regulated 6-hour tournament window forced the top five to bag their limit before lunchtime. Here’s how they maximized their time on the water.

With 19 pounds, 3 ounces, Andrew Loberg placed himself in a prime position on Day 1 by putting his head down and covering water.

“I’m basically staying in the Central Delta,” Loberg says. “I picked an area, and I’m just putting the trolling motor down and rolling. Whatever looks good in front of me, I’m going to fish it.”

The shortened tournament day hasn’t impacted him too much, as most of his bites came during key times throughout the morning.

“I don’t mind the short time period, because the tide is right with what I’m doing,” Loberg says. “Once that tide is where you want it, you can’t be missing it. You can get caught running around a lot, but I just milked one area.”

With two days to go, time will tell if Loberg’s spot has enough juice to go the distance.

“I think the pressure has definitely been changing,” he says. “It’s a transition bite on a tidal fishery, it’s going to change every day of the tournament.”

Jon Strelic also made the most of his morning by bagging 18 pounds, 8 ounces and a spot in the Top 5.

“With a 6-hour tournament I didn’t want to run,” Strelic says. “I wanted to keep as much time fishing as I could, so we stayed pretty local. We literally ran 15 minutes.”

Staying close didn’t mean staying in one place, however.

“We fished a lot of reaction bites and covered a lot of water,” Strelic says. “We were able to bump into a couple of good ones.”

When the tide changed Strelic switched up his approach and was able to round out a healthy limit.

“At low tide I had an area that really produced well,” he says. “I caught a few good ones pitching a little worm around.”

With the clock ticking, Strelic will get the opportunity to do it all again on Day 2.

“It’s a short day, you feel under pressure,” he says. “It keeps me constantly moving.”

Randy McAbee Jr. rolled the dice to land in a top spot on Day 1.

“I’m fishing a spot I’ve never fished on the Delta before,” McAbee says. “I went up there during practice, and was able to catch 12 to 13 pounds. I struggled to get a limit down south, so I headed up there and was able to land 18 pounds.”

His spot panned out, but his initial strategy didn’t.

“I planned on throwing topwater and moving baits, but I ended up punching everything,” McAbee says. “I’m looking for a very specific piece of cover, and when I find it I catch them.”

The short time-table makes his move a risky one, which has been worth the reward so far.

“I’m making a long run,” McAbee says. “It’s an hour there and an hour back. With the shortened day it makes it really tough. I hope the wind doesn’t blow tomorrow!”

Landing a spot in the Top 5 on Day 1 would be satisfying for most, but Gregg Leonard feels he left a lot out on the water.

“I lost an 8-pounder today … I’d be in first,” Leonard says. “He was running around the boat and he popped off.”

Leonard will look to get revenge on Day 2, focusing on many of the same patterns from today.

“I just went in the mid-Delta, threw a ChatterBait, flipped and pitched,” Leonard says. “You can’t cover much of that water in 6 hours. It’s tough!”